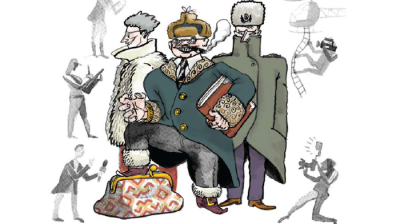 Despite the popular image of being greedy and power-hungry, the average Russian bribe-taker is an active, energetic, and entrepreneurial person, a study by the Academy of the Prosecutor General’s Office cited by Vedomosti daily on December 6 claims.

The data for the survey was gathered from the "interviews" with people convicted for corruption, although more details were not disclosed. An average profile is that of a 40 year old man.

The bribe-takers interviewed by the to-be prosecutors are reportedly purposeful, sociable, stress-resistant, hardworking, able to control themselves, and ready for teamwork. They generally have a higher education, a permanent residency, family and kids. They are not prone to bad habits such as abusing alcohol or drugs.

Notably, low income has been the main motivation for bribe-taking only for the third of the respondents. Others were driven for the need for self-affirmation, corporate solidarity and even revenge on team leadership.

The tolerance for corruption is one of the main enablers of the crimes: over 60% of the respondents believe that their superiors knew about the crime but didn't do anything to prevent it or disengaged. Despite that, the bribe-takers themselves admit that corruption is the second worst problem impeding Russia's development (versus 9th place for general population).

No protests, but police continue to randomly arrest pedestrians on Belarus Independence Day
1 hour ago
Governor Smolii’s departure from the NBU creates the risk of devaluation of the hyrvnia or default on its debt this year
23 hours ago
Croatia heads for hung parliament in July 5 election
23 hours ago
Evidence of massive ballot stuffing emerges in Russia's referendum on constitutional changes
1 day ago
Poland’s coal production falls to all-time low in May
1 day ago