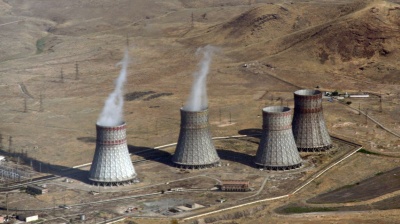 Armenia’s nuclear power plant is dangerous and it is time to close it, an analysis in the Bulletin of the Atomic Scientists has concluded.

The European Union, said the article in the Bulletin—an independent nonprofit and publication that began life in the aftermath of the atomic bombings of Hiroshima and Nagasaki and is focused on nuclear risk, climate change and disruptive technologies—must step up efforts to persuade Armenia to make good on previous commitments to shut the Soviet-era Metsamor facility, located in a major seismic zone [bne IntelliNews notes that since we published our coverage of the Bulletin's article, concerns have been raised that the piece was presented by the Bulletin with no reference to the fact that its author, Brenda Shaffer, has received funding from Azerbaijan's state-run oil company SOCAR. Nevertheless, the case for closing Metsamor is persuasive to many experts and Shaffer's analysis remains a legitimate contribution in the public realm of debate).

In late 2020, the Armenian government announced that Metsamor would close for five months in 2021 to attempt significant upgrades. Soon after, the EU urged Armenia to make the closure permanent since the plant “cannot be updated to fully meet internationally accepted safety standards”.

The Bulletin analysis stated: “A major nuclear or radiation accident at Metsamor would not only affect the people of Armenia, but citizens in neighboring Turkey, Georgia, Azerbaijan, Iran, Russia, and southern Europe. Besides, Armenia can meet its energy needs without Metsamor’s output, especially as it exports to Iran over half of the plant’s electricity.

“Further, thermal plants and renewable sources could replace what is used domestically. Metsamor does not even help Armenia achieve its declared goal of energy independence, as Russia–Armenia’s main energy supplier–provides the country with most of its natural gas, along with nuclear fuel and specialized technicians for the plant. But none of these arguments have swayed Armenia to close Metsamor in the past.”

Asking if there is an argument that could work now, the Bulletin piece added: “The EU might urge Armenia to consider a closure in light of recent developments. Post-war road, railway, and energy-development plans should increase trade and transportation linkages in the South Caucasus region after the recent conflict between Armenia and Azerbaijan. The new infrastructure and financing provide Armenia with a fresh opportunity to tap newer, safer, and more diverse energy supplies. By closing Metsamor, Armenia would not only contribute to the safety of its own citizens and those in neighboring countries but strengthen peace in the South Caucasus.”

Metsamor is located close to Armenia’s capital, Yerevan, and near Armenia’s border with Turkey. It originally included two 400 megawatt reactors. Unit 1 began commercial operation in 1977. Both units were closed by the Soviet authorities in 1989, following the Chernobyl nuclear accident and the Spitak earthquake in Armenia in 1988, which killed over 25,000 people.

In 1995, following Armenia’s independence, Metsamor Unit 2 was restarted at 375 megawatts electrical with Russian funding and technical support. The plant’s original operating licence was meant to end in 2016, but Yerevan extended it to 2021, and late in 2020 announced its intent to extend the plant’s operation even longer. Unit 1 has remained closed.

Noted the Bulletin article: “Metsamor is one of five of the last operating Soviet-era reactors without a containment vessel, which is a requirement of all modern reactors. (The other reactors without containment vessels are located in Russia.) “Nuclear fuel for the Metsamor plant is flown in from Russia, with no special announcements to the Armenian public or regional aviation authorities. In contrast, most nuclear fuel is delivered in the world by sea or rail to minimize the impact of potential accidents. Since the restart of Metsamor Unit 2, the reactor’s spent nuclear fuel has remained on site.

“Then-Armenian Deputy of Energy Areg Galstyan stated in 2004 that details on the air shipments of the nuclear fuel were kept secret to ‘avoid alarming the people.’”

Since its re-launch in 1995, Metsamor has had multiple safety upgrades and also dozens of low-level safety incidents, according to records of he UN watchdog, the International Atomic Energy Agency (IAEA).

Hakob Vardanyan, Armenia’s deputy minister of territorial administration and infrastructure, who oversees the energy sector, has commented that upgrade work at Metsamor had fallen behind schedule because Armenian workers have an “acute lack of experience” in nuclear plant construction and repair.

Since the late 1990s, the EU has repeatedly encouraged Armenia to close Metsamor as part of a programme aimed at shutting down nuclear power plants it has viewed as dangerous, including some located in the EU. Lithuania, Bulgaria, and Slovakia agreed to shut down their plants as a condition of joining the EU.

In almost every official report related to its European Union Neighbourhood Policy implementation, the EU has underlined that it wanted Armenia to close Metsamor. For example, observed the Bulletin assessment, the 2011 European Union Neighborhood Policy Country Progress Report-Armenia stated: “The EU continues to request the closure of Metsamor Nuclear Power Plant as soon as possible, as it cannot be upgraded to meet internationally recognized nuclear safety standards.”

The 2017 EU-Armenia Comprehensive and Enhanced Partnership Agreement stated that both sides would cooperate on “the closure and safe decommissioning of Metsamor nuclear power plant and the early adoption of a road map or action plan to that effect, taking into consideration the need for its replacement with new capacity to ensure the energy security of the Republic of Armenia and conditions for sustainable development”.

However, as Armenia signed various agreements with the EU to close and decommission the plant, it also negotiated other agreements with Russia to extend the reactor’s life. In March 2014, the Armenian government formally extended Metsamor’s operation.

In December 2020, the European Commission reaffirmed the EU position: “The nuclear power plant located in Metsamor cannot be upgraded to fully meet internationally accepted nuclear safety standards, and therefore requires an early closer and safe decommissioning. It is necessary to rapidly adopt a roadmap or action plan to address this, taking into consideration the need to ensure Armenia’s energy security and conditions for sustainable development.”

The Bulletin article concluded: “Armenia’s energy security allows Metsamor’s closure. Armenia has a unique energy market with relatively small consumption of electricity and a large proportion of its electricity exported, mostly to Iran. Armenia has several options for reducing its electricity needs and finding substitutes for Metsamor’s output, meaning that Armenia could close its nuclear power plant and still provide reliable energy for its population.

“Most energy in Armenia is used for residential purposes and transportation, with only 15 percent consumed by industry. Armenians primarily use natural gas, which accounts for 65 percent of the country’s energy consumption. Armenia’s relatively mild summers mean that relatively little energy is needed for cooling. As a result, the country’s per-person electricity consumption is less than half that of Europe’s.

“Armenia could provide reliably for its energy needs without the output from its nuclear power plant.”