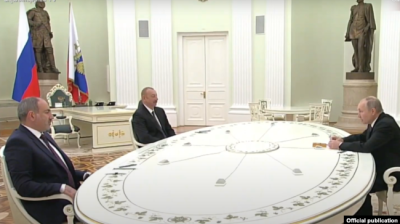 Pashinian, left, and Aliyev, in the trilateral meeting with Putin.
By bne IntelIiNews January 12, 2021

However, Pashinian, who added that key issues needed solving immediately, nevertheless agreed to a step forward in resolving relations—following the talks, Putin, Aliyev and Pashinian issued a joint statement on the Kremlin website announcing the creation of a trilateral working group to oversee the "unblocking of all economic and transport links" in the parts of the South Caucasus region applicable to Azerbaijan, Armenia and the Nagorno-Karabakh enclave.

The meeting was the first encounter between the leaders of Armenia and Azerbaijani since in early November the Armenians, seemingly on the point of losing the entirety of Nagorno-Karabakh to Aliyev’s better equipped armed forces following six weeks of bloody warfare, agreed to sign a ceasefire deal brokered by Putin and backed by Baku, which retrieved sizeable territories in and around the enclave as a result of the agreement. Pashinian and Aliyev did not shake hands before the meeting, which lasted for four hours.

Aliyev specifies "the past"

Aliyev called Putin's invitation for the trilateral meeting "very useful and productive," saying afterwards that the Nagorno-Karabakh conflict "remained in the past".

The trilateral working group will be jointly chaired by deputy prime ministers from the three countries and will hold its first meeting before January 30, the joint statement said.

Putin at the start of the meeting thanked the two leaders for their cooperation with Russia's mediation efforts aimed at "stopping the bloodshed, stabilising the situation, and achieving a sustainable ceasefire". He added that the truce had been successfully implemented, laying the foundation for a fair settlement of the decades-long conflict. Around 2,000 Russian peacekeepers are deployed in and around Nagorno-Karabakh, with one mission the protecting of a land link connecting Nagorno-Karabakh with Armenia.

Details of the agreement that remain unclear include the final political status of Nagorno-Karabakh, the exact delineation of the border separating the two sides along the still militarised frontline and economic issues.

Pashinian—who is under considerable pressure back home to appear tough in dealings with Azerbaijan as he faces persistent calls to resign over his handling of the conflict—also said a solution was needed to the "most sensitive and painful question" of prisoners of war. Some PoWs were exchanged in December. It remains unclear how many more remain to be exchanged.

Azerbaijan has said that the ceasefire agreement provides for a Russian-guarded land corridor across Armenian territory that would connect it to Azerbaijani exclave Nakhchivan, which borders Turkey, an ally that proved a bellicose backer of Azerbaijan in the conflict and provided the armed drones that many analysts say swung the war decisively in Azerbaijan’s favour. However, Armenia has said that the deal, while referring generally to the need to unblock economic and transportation infrastructure, does not mention anything so specific.

Thomas de Waal, an expert on the Caucasus region, told RFE/RL in December that it would be “incredibly difficult” for the Armenians to facilitate the creation of such a corridor through its territory.

Nagorno-Karabakh is internationally recognised as part of Azerbaijan, but the ethnic Armenians who make up most of the region's population reject Azerbaijani rule and run a self-proclaimed republic.

Dmitry Trenin, a political analyst for the Moscow Carnegie Center, said the talks would allow the Kremlin to reaffirm its influence in the region. "[The] peacekeeping function is Moscow's advantage in its competitive relationship with Ankara," Trenin tweeted on January 10.

Armenian PM takes to streets claiming military coup under way
Following war with Armenia, Azerbaijan gains control of lucrative gold mines
CAUCASUS BLOG : What can Biden offer the Caucasus and Stans, all but forgotten about by Trump?