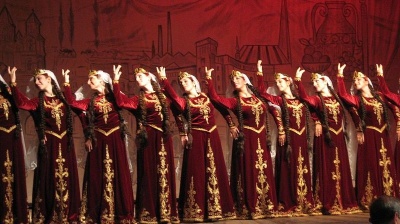 Armenia has kept its footing so far. / Raffi Kojian.
By bne IntelIiNews July 28, 2020

Rating-Agentur Expert (RAEX Europe) has confirmed the sovereign government credit rating (SGC) of Armenia at ‘BB-’ (sufficient level of creditworthiness of the government) in national currency and foreign currency.

The Frankfurt-based credit rating agency, however, changed the Armenia outlook from positive to stable.

“The change of the rating outlook for Armenia from positive to stable reflects our expectations about a widening of the budget deficit and an increase in debt levels by end-2020, together with the anticipated contraction of the economy. However, the sovereign government credit ratings were confirmed at ‘BB-’, due to the fact that most of the debt increase is related to donor support at concessional terms,” said Vladimir Gorchakov, associate director of RAEX Europe.

He added: “The ratings also remain supported by adequate quality of the fiscal and monetary policies, low inflation and a stable stance of the banking system. Nevertheless, government debt levels and its currency structure, together with a high exposure to external shocks, high dependence on imports and negative current account balance, continue to be the factors constraining the rating.”

Looking at positive factors that influenced the awarding of both types of ratings, RAEX Europe said:

“The banking sector of Armenia showed a healthy stance at the pre-crisis [pre-coronavirus/COVID-19 pandemic crisis] point. By the end of 1Q 2020 the regulatory capital to risk-weighted assets was 17.0%, NPLs to total loans stood at 5.3%, ROA and ROE were 1.% and 12.6%, respectively, while the ratio of liquid assets to demand deposits was 118.1%.

“Domestic credit provided by the financial sector and assets to GDP ratios continued its growth in 2019 and reached 65% and 89% respectively, as compared to 62% and 83% in 2018. We expect credit growth to slow down in 2020, but being backed by co- and re-financing government support packages. We also expect deterioration of the banking system metrics by end-2020 with the worsening of asset quality and declining profitability and capitalization metrics. However, the prompt response of the Central Bank of Armenia (CBA), including relaxation of some prudential and reserve requirements and provision of additional liquidity, will help to cushion the blow of the pandemic on the banking system.

Further looking at positive factors, the ratings report also stated: “Government debt structure remains favorable. As of May 2020, short-term debt accounted for 4.8% of total debt, 16% had floating interest rate and FX-denominated debt remained elevated at 77%; however, this type of debt remains mostly concessional;

“The inflation rate in 2019 continued its decline and reached 0.7% by the end of the year as compared to 1.8% in 2018. The reading, however, stood well below the initial target of 4% set by the CBA. Such a low level of inflation, allowed the CBA to lower its policy interest rate three times during 1H 2020, the last time being in in June 2020 when it trimmed it down to 4.5%, which is historically the lowest level for this metric, while the inflation rate turned negative by the end of 1Q 2020.

“We expect that the policy relaxation together with AMD depreciation will elevate the inflation up to 1.5% by the end of 2020. In general, we continue to observe an effective monetary policy with high credibility and an improved transmission mechanism, however, it remains partially distorted by elevated financial dollarization;

“In response to the COVID-19 crisis the fiscal authorities turned to a counter-cyclical loose fiscal policy with accelerated budget support of the economy, at the same time the government keeps improving the quality of such policy by implementing public investment management reforms, Medium-Term Expenditure Framework and program-based budgeting. We assess the quality of the policy as adequate; however, the government’s commitments to lower the deficit and debt metrics shall be monitored on the recovery stage;

“Armenia remains attractive for foreign investors, as shown by stable levels of FDI net inflows, which stood at around 2% of GDP over the last two years (1.9% in 2019 as compared to 2.0% in 2018); however, we can expect a sharp decrease of FDI in 2020 driven by the current turbulence in the global economy.

Looking at restricting factors for Armenia, the ratings report said:

“During 2019 the international reserves of the Central Bank of Armenia showed a steady recovery and reached USD 2.8 bn by December 2019, which was equal to 5.7 months of imports, as compared to 3.7 in 2018. However, by May 2020 reserves already declined by 5% as compared to the end of year. Despite such a drop, the level remains acceptable, covering short-term debt by 9x;

“Estimated GDP per capita in PPP terms for 2019 is expected to be at USD 11.3 th, remaining satisfactory when compared to the average of Armenia’s regional non-oil dependent (RNOD) peers1;

“Despite an improvement in the World Bank governance indicators in transparency of government policymaking and government effectiveness, institutional development in the country remains moderate, corruption remains a drag for economic growth;

“In the face of the COVID-19 economic crisis, the spread between the 10Y U.S. government bond and the USD-denominated Armenian government bond maturing in 2029 increased up to 3.5p.p., but remained acceptable according to our thresholds;

“Reduction of some capital spending, as well as higher than expected budget income, helped the fiscal balance of the government to narrow further with the budget deficit reaching 1% of GDP in 2019, which is 0.8p.p. lower than in 2018. In the face of the COVID-19 crisis, authorities already accelerated spending on healthcare and economic support to vulnerable firms and households (with a total announced assistance package of USD 300 m), while anti-pandemic lockdown measures led to a drop of tax and export revenues. Due to this, we expect the overall fiscal deficit to reach around 5% of GDP by end-2020, but we expect the deficit to go below the 3% threshold as soon as in 2021;

“In 2019 the Armenian economy showed remarkable growth at 7.6% y-o-y, which is the highest level over the last decade, spurred by internal consumption, manufacturing and service output. However, in 1Q 2019, real GDP growth already slowed down to 3.8%, while the monthly indicator of economic activity in May 2020 showed a contraction of 12.8% as compared to May 2019.

“Due to the already observed drop in remittances inflow, negative dynamics in most of the key industries, including tourism, as well as announced prolongations of lockdown measures, we expect an overall contraction of the economy at around 1.5% by end-2020 with a recovery in 2021

Identifying negative factors impacting Armenia, the ratings report said: “More prudent fiscal policy of the government, which led to a narrower deficit, as well as commitment to the debt targets, materialized in the reduction of the government debt load for the second year in a row. The level of public and publicly guaranteed debt reached 53.6% of GDP in 2019, while the central government debt dropped below 50%, which is in line with the government’s objective.

“However, due to the current economic crisis, significant fiscal support of the economy and under-performance of the tax collection, we expect a sharp debt increase up to 64% of GDP and 275% of budget revenues by end-2020. At the same time most of this increase is related to the financial support from international organizations, such as IMF and ADB, at concessional terms;

“Levels of unemployment in Armenia remained high in 2019 at 18.9% and are expected to increase slightly up to 19% in the face of the COIVID-19 economic crisis;

“The stock market continues to be underdeveloped, as total market capitalization in the country has remained practically unchanged for the last five years and stood at 2.3% of GDP as of December 2019. Moreover, the trades are highly concentrated in the 10 largest issuers of shares;

“Armenia is ranked 47th out of 190 countries in the World Bank Doing Business report 2020, a drop of six places in the comparison with the 2019 results due to a very low score on protecting minority investors’ rights. In addition, the economic competitiveness of Armenia remains limited, as shown by a persistent trade deficit, which stood at 15% of GDP in 2019 and is expected to be around 13.6% in 2020.”

· Financial dollarization remains high but is declining in a stable way; loans and deposits in FX were equivalent to 48.8% and 44.6% of total loans and deposits, respectively, as of May 2020 (weak stress-factor)

· The conflict with Azerbaijan over Nagorno-Karabakh remains unresolved and escalation is still a latent risk (very weak stress-factor).