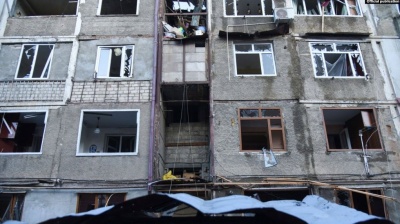 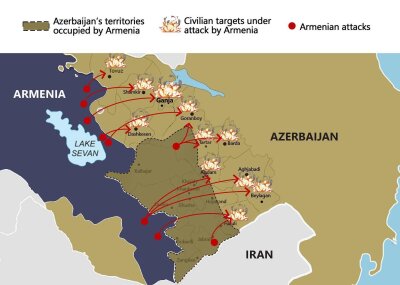 Armenia and Azerbaijan over the weekend edged closer to outright war as fighting escalated dramatically over the disputed region of Nagorno-Karabakh amid multiple reports of attacks on Azerbaijani towns and cities outside of the disputed enclave.

Baku accused Armenian forces of firing rockets at its second city Ganja, which lies outside the contested enclave. It said at least one civilian was killed and 32 more injured in the October 4 attack on Ganja, located around 100km (60 miles) north of the Karabakh capital, Stepanakert.

Unverified video shared on social media seems to confirm the reports and shows buildings in central Ganja damaged by rocket attacks and shelling.

Azerbaijani presidential aide Hikmet Hajiyev late on October 4 added that the industrial city of Mingachevir had been attacked. “Mingachevir hosts water reservoir and key electricity plant. Barbaric expression of desperation,” Hajiyev said on Twitter. Prior to his comments on Mingachevir, he claimed that there had also been civilian casualties from an attack in another region of Azerbaijan, Beylagan, which borders Nagorno-Karabakh. There were also reports that the Azerbaijani cities of Terter and Goradiz had been shelled.

Armenia denied it had directed fire “of any kind” towards Azerbaijan. But the Armenian leader of self-proclaimed republic Nagorno-Karabakh, Arayik Harutyunyan, confirmed on Facebook that his forces targeted a military airbase in Ganje, but then ceased firing to avoid civilian casualties.

Armenia said on October 4 that Stepanakert, which has been under artillery fire since October 2, was hit again. Armenian officials published video footage showing burning buildings and vehicles in the aftermath of the attack on the city. "Azerbaijani forces are shelling civilian targets in Stepanakert with rockets," Armenian Defence Ministry spokesman Artsrun Hovhannisian said.

The BBC's Johan Fisher in Stepanakert  reported on shelling over the weekend that targeted the city and destroyed buildings sending residents scrambling for basements and air raid shelters. There are also reports that Azerbaijan was using cluster bombs on the city that has also been a target in previous fighting between the two opponents. Other reports claimed the power station in the Nagorno-Karabakh enclave was taken out and tat power to the city is cut off.

Casualties from the past week’s fighting have undoubtedly run into the hundreds, but precise figures are impossible to obtain and verify. Both Baku and Yerevan accuse each other of continuously targeting civilians.

A BBC report showed Stepanakert under bombardment by Azerbaijan forces

Question of how far Azerbaijan will go

As the conflict enters its second week, the question turns to how far Azerbaijan, emboldened by bellicose backing from Turkey but under pressure from Russia, the European Union and the US for an immediate ceasefire, is prepared to go. That’s especially the case as Russia—a strategic partner of Armenia, where it has military bases, but also mindful that it has close links with Baku—must decide what it will tolerate in its back yard.

Reuters reported regional and military analysts as saying that the Azerbaijanis lack the firepower to overrun mountainous Nagorno-Karabakh—internationally recognised as still part of Azerbaijan but controlled for around three decades by ethnic Armenians—completely but may settle for territorial gains that will enable them to declare a victory and gain leverage in future negotiations.

After six days of heavy fighting over Azerbaijan’s breakaway region of Nagorno-Karabakh, Baku’s forces appear to be trying to consolidate control over a series of abandoned towns and villages they claim to have retaken around the ethnic Armenian-held capital, Stepanakert.

Matthew Bryza, who served as US ambassador from 2010 to 2012 and is a former US cochair of the OSCE's Minsk Group charged with negotiating an end to the dispute, told RFE/RL that a battle plan to consolidate control over a series of abandoned towns and villages which Azerbaijan claims to have retaken would be in line with the political goals of President Ilham Aliyev.

“I think the Azerbaijani objectives here are limited,” Bryza was quoted as saying, adding: “They are political, largely. Recapture some territory that they can hold without going too far and find themselves being overextended. This is exactly what I’d expect Azerbaijan to do. War is the continuation of politics by other means. You go to war because you have political objectives.”

The main political objective for Aliyev is “to regain some territory, enough territory, so that his historical legacy will be positive,” Bryza, who lives in Istanbul and is now a senior fellow at the Atlantic Council think tank, was further cited as saying. “[If he's successful, he] will have enabled several hundred thousand displaced Azerbaijanis to return to their homes [which have been abandoned since the early 1990s]. That is an enormous political achievement."

For the most part, Bryza concluded, the long-abandoned villages Baku claimed to have “liberated” to the southeast of Stepanakert during the past week were in “territory on the flatlands up to the base of the hills” around Nagorno-Karabakh’s capital. An advance by Azerbaijani forces to retake Stepanakert would have to contend with crossing treacherous hilly terrain, as well as deep gorges with steep cliffs.

“They appear to have captured the territory on the flatlands because that is what they could capture the easiest,” Bryza was reported as saying. “But it’s also the hardest for them to hold. From Azerbaijan’s perspective, the fighting will need to continue into the higher ground like it has in the north so that Azerbaijan will be able to defend that territory it has gained.”

Maxim Suchkov, a senior fellow and associate professor at the Moscow State Institute of International Relations (MGIMO-University), said on October 2 that discussions between Russia and Turkey over how to resolve the conflict were “getting uneasy”. He said in a tweet: “After #Moscow turned down #Ankara’s proposal to set up #Syria-type format for Karabakh (#KarabakhAstana) [Turkish Foreign Minister] @Mevlut Cavusoglu told [Russian Foreign Minister Sergey] Lavrov cease-fire not gonna happen until #Armenia leaves occupied Azeri areas.”

Aliyev on October 4 demanded that Armenia set a timetable for withdrawing from Nagorno-Karabakh and surrounding Azerbaijani territories, stating that Azerbaijan would not bring its military action to an end until that occurred.

In a televised speech in the evening on October 4, he said Azerbaijani forces were advancing in a week-long offensive to retake territories that they lost to ethnic Armenians in the 1990s. "Azerbaijan has one condition, and that is the liberation of its territories," he said. "Nagorno-Karabakh is the territory of Azerbaijan. We must return and we shall return."

Armenian Prime Minister Nikol Pashinian told his countrymen in a televised address on October 4 that there was intense fighting all along the front.

“As of now, we already have significant human losses, both military and civilian, large quantities of military equipment are no longer usable, but the adversary still has not been able to solve any of its strategic issues,” said Pashinian—who claimed Armenia has information that 150 high-ranking Turkish officers were helping to direct Azerbaijani military operations—as reported by Reuters.

Armenia’s armed forces have so far held back from entering the war alongside those of Nagorno-Karabakh. But Pashinian portrayed the conflict as a national struggle and compared it to the country’s war with Ottoman Turkey in the early 20th century.

The Armenian Foreign Ministry said Armenia, as the guarantor of Nagorno-Karabakh’s security, would take “all the necessary means and steps” to prevent what it called “mass atrocities” by the forces of Azerbaijan and its ally Turkey. A ministry spokeswoman declined to comment on what steps this could entail.

Armenia has also claimed that thousands of Syrian militiamen allied with Turkey have been brought to the conflict zone by Ankara to fight with the Azerbaijan forces. Turkey denies having brought in any mercenaries or Turkish soldiers and has said it will only take a military role in the conflict should Baku request such assistance.

The Guardian has reported that 1,000 Syrian fighters working for private Turkish security firms have deployed to Nagorno-Karabakh to support Azerbaijan’s armed forces. The bodies of at least 50 Syrian combatants were repatriated to the last rebel-held corner of Syria on October 3, with some funerals held for the dead men the same day, several Syrian families said, according to the publication.