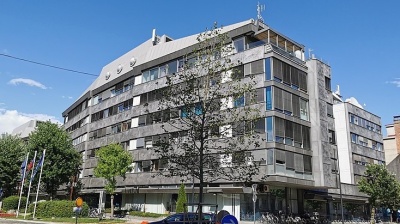 A group of anti-vaxxers and opponents of epidemiological measures to fight the coronavirus (COVID-19) in Slovenia broke forcefully into the headquarters of the public broadcaster RTV Slovenia on September 3, managing to get into the newsroom studio before the police intervened.

Slovenia is regularly adjusting measures against COVID-19 as it reports an increase in infections and hospitalisations in recent weeks.

According to STA, the group is the Aware People of Slovenia, OPS, a movement led by Ladislav Troha, which has been protesting everything that has to do with the coronavirus pandemic in front of the RTV building since the spring.

The protestors did not follow the orders of the security guards, which led to the intervention of police officers in order to ensure public order. About 20 protesters, who were not wearing masks, were evacuated from the building, RTV Slovenia reported.

The NGO says its goal is the adoption of a new constitution which will establish a new social order – direct democracy with three central pillars, initiative, referendum and revocation, so that all important issues and who runs the country will be decided directly by the people. Other goals include solution of human resources problems, establishment fair rule of law, prosperity of Slovenian economy and spiritual and ethnical revival of Slovenian nation. Despite its noisy protests, the NGO has only 75 followers on Facebook.

The management of RTV Slovenia strongly condemned the intrusion, saying that the anti-vaxxers abused the right to protest peacefully and adding that the public broadcaster expects ‘resolute action’ from the government.

“They have every right to express their views peacefully, but in no way have the right to violently break into the premises of RTV Slovenia, or anywhere else," Pahor said.

According to Slovenia’s Prime Minister Janez Jansa, the illegal intrusion into the building of RTV Slovenia or any other public building has nothing to do with freedom of expression.

"This is violence against freedom. Every effort must be made to condemn and punish any arbitrary and violent appropriation of public space and threats," Jansa wrote on Twitter.

Slovenian Interior Minister Ales Hojs said that such events make it necessary to tighten criminal law and the law on public order and peace.

They called for adequate protection of employees of RTV Slovenia and for an end to planned hostility against journalists, especially on social networks.

Slovenia has been frequently criticised for online harassment of and threats against journalists, as well as for lack of media freedom.