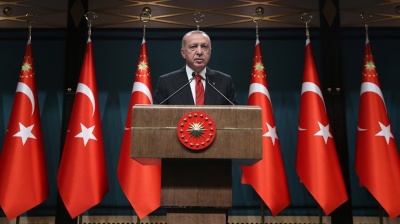 The harshest critics have long argued that Erdogan is a dictator in all but name.
By bne IntelliNews May 6, 2019

Any belief that democracy is still alive and well in Turkey—or maybe just “alive”—has been put on the line by the decision of electoral officials to rerun the Istanbul mayoral election narrowly won by the country’s main opposition party at the end of March.

The Istanbul defeat was a true slap in the face for President Recep Tayyip Erdogan and his ruling Justice and Development Party (AKP), which, along with its Islamist-rooted predecessors had held the business and cultural capital for a quarter of a century. Istanbullers, mired in a miserable struggle against a recession widely viewed as brought about by the Erdogan administration botching the economy, essentially made their poll—as did several other Turkish municipalities that took part in the local elections—a referendum on their president, who has been at the helm of Turkey for 17 years.

The triumph of Republican People’s Party (CHP) candidate Ekrem Imamoglu in the mayoral contest is seen as a personal humiliation for Erdogan, given how intensively he campaigned prior to polling day, addressing half a dozen rallies a day with fiery rhetoric and describing the vote as about the “survival” of Turkey. The loss is especially troubling for the populist strongman president because Turks widely regard grass roots political success as paving the way to victories on the larger stage—indeed, Erdogan himself rose to prominence as mayor of Istanbul in the mid-nineties.

Sheen of invincibility
Before the AKP went down to defeat in Istanbul, Ankara and several other key cities, Erdogan had a sheen of invincibility, for he had never lost a key election and last year was made executive president after constitutional changes—narrowly passed after a suspect, narrow win in a referendum—did away with the post of prime minister and weakened the role of parliament. Now, unless the High Election Board (YSK) gives a credible and detailed explanation as to how it came to deem the victory of Imamoglu as unfair, the Istanbul revote, scheduled for June 23, may come to be regarded as a crossroads at which it became unmistakably clear that Turkey is under the sway of a dictatorship.

The Turkish lira (TRY), already battered and bruised from the attempt to pull away from Turkey’s currency crisis which reached its worst point last summer and has been re-emerging of late, plunged on news of the YSK decision to call a fresh election. It touched a seven-month low against the USD, and by near the end of May 6 it was trading in the 6.08s, having started the day at 5,98.

“Political twilight zone”
“We’re in a political twilight zone, where the economy has fallen to the side,” Anthony Skinner, Middle East and North Africa director at risk analyst Verisk Maplecroft, told Bloomberg. The vote re-run “prolongs the electoral cycle, exacerbates negative economic conditions and kicks the can of reform—to the extent that it exists—further down the road,” he said.

“Erdogan does not accept defeat and goes against the will of the people” Kati Piri, the European Parliament’s rapporteur on Turkey, said on Twitter following the decision to hold a new poll. “This ends the credibility of democratic transition of power through elections in Turkey.”

“This is damaging for Turkey’s perception as a democracy and will leave Turkey’s economy vulnerable, given risks to macro financial stability in the period to July,” Timothy Ash of BlueBay Asset Management remarked.

The CHP announced an emergency meeting after the election board’s ruling in favour of the AKP and its ultra-nationalist allies, the MHP, and described the YSK ruling as resulting from a “plain dictatorship”. Reuters witnesses said people were banging on pots and pans in protest against the ruling in several Istanbul districts.

“Illegal to win against the AKP”
One CHP lawmaker, Mehmet Bekaroglu, said on Arti TV that the AKP pressured and threatened YSK judges with prison if they voted against a rerun. “It is illegal to win against the AK Party,” CHP deputy chairman Onursal Adiguzel wrote on Twitter. “This system that overrules the will of the people and disregards the law is neither democratic, nor legitimate.”

Imamoglu took office as Istanbul mayor almost three weeks ago, but will now have to step down while an interim mayor takes over. Addressing thousands of supporters in Istanbul late on May 6, Imamoglu—who defeated Binali Yildirim, who lost his job as PM last year when Erdogan became the executive president—said the YSK’s decision was baseless. He would, he said, reach out to people who cast their ballots in the first election for the AKP or other parties, in his bid to win the rerun.

“Shame on the YSK. They were placed under political pressure from day one,” Reuters reported Imamoglu as telling hundreds of chanting and flag-waving supporters.

Imamoglu won the mayorship by the slim margin of towards 14,000 votes in a city of 15mn people (with 10mn eligible to vote) that accounts for around a third of Turkey’s GDP.

After Imamoglu’s victory, Erdogan appeared to vacillate over whether there should be an election rerun, but he steadily turned up the heat on the YSK and this past weekend declared that Istanbul’s election laws had clearly been violated because private-sector employees were taken on as ballot officials instead of civil servants. The YSK has also cited instances of unsigned results documents in determining that the election was invalid.

More and more menacing
The AKP’s campaign for a revote has also become more and more menacing for its opponents, with around 100 polling station workers called in for questioning as suspects. Also at the weekend, Istanbul’s chief prosecutor alleged that dozens of officials involved in administering the vote were linked to US-based Islamic preacher Fethullah Gulen, whom Ankara accuses of masterminding the failed coup attempt against Erdogan almost three years ago. Tens of thousands of state employees have been jailed or dismissed for having alleged ties to Gulen, who denies having any connection to the botched effort at a putsch.

Anyone doubting the severity of the decline in Turkey’s democratic credentials need only look up a series of alarming reports issued in the past year by rights watchdogs.

In early April, Human Rights Watch (HRW) released a report exploring how Turkey has arbitrarily jailed hundreds of lawyers and put them on trial in the aftermath of the botched coup attempt of July 2016.

Turkey, meanwhile, is seen as “Not Free” by the Freedom House watchdog and, for three straight years, it has been listed by the Committee to Protect Journalists (CPJ) as the world’s biggest jailer of journalists.

Investors hot for corona Eurobond issues from Southeast Europe
2 days ago
LONG READ: The Growers - a handful of countries in New Europe are coping with the coronacrisis and are still expanding
9 days ago
Foreign share of Ukraine's domestic bonds falling, demand for fresh debt spluttering
7 days ago
Russia’s VTB trapped in a London lockdown until 2024
7 days ago
Movie night at the airport
12 days ago