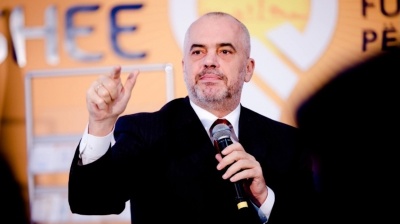 Rama made the comment on Twitter after repeated criticisms of Albanian migrants made by top UK politicians including Home Secretary Suella Braverman and Immigration Minister Robert Jenrick.

While Albania, an EU candidate country in the Western Balkans, is deemed by London to be a safe country, it accounted for the largest numbers of people crossing the English Channel in small boats in the first half of this year, according to Home Office data.

Earlier in the year, the Albanian and UK governments announced they were working together to try to reduce the numbers of Albanians illegally entering the UK, but following the spat there are concerns that future cooperation may now be difficult.

"Targeting Albanians (as some shamefully did when fighting for Brexit) as the cause of Britain’s crime and border problems makes for easy rhetoric but ignores hard fact. Repeating the same things and expecting different results is insane (ask Einstein!),” Rama wrote on Twitter.

“Albania is a Nato country & is negotiating its EU membership. It is also a safe country of origin. When Germany had a similar problem it tightened its own systems. The UK can and should do the same not respond with a rhetoric of crime that ends up punishing the innocent,” he added.

“Albania is not a rich coutry and was for a very long time a victim of empires, we never had our own.We have a duty to fight crime at home and are doing so resolutely, [and] cooperating closely with others too. Ready to work closer with UK but facts are crucial. So is mutual respect.”

Jenrick told the UK parliament on October 27 that up to a quarter of the people making the crossing to the UK this year were from Albania.

“Albania is quite clearly a safe country, and those individuals have crossed through multiple other safe countries before arriving in the United Kingdom,” the minister said.

"Some reports suggest that as much as 1% or even 2% of the adult male population of Albania either have attempted to leave the country in this manner, or are contemplating doing so.”

Of the Albanians whose asylum applications are successful, most are reportedly women who have been trafficked to the UK.

Given the large number of illegal arrivals, London is considering a “bespoke route” for Albanians to have their cases heard quickly and to be sent back to Albania if they are unsuccessful.

A readmission agreement was signed between the UK and Albania in 2021, after which nearly 1,000 Albanian offenders had been removed from the UK.

In August 2022, the two countries agreed to seek to expedite removal of Albanians who had entered the UK illegally.

Tirana has offered law enforcement support to the UK to help with intelligence and to support processing.

At the beginning of September, the UK government announced it had removed 32 criminals and immigration offenders on a charter flight to Albania. They included people who had entered the UK illegally as well as those who had received prison sentences for offences including drug dealing, facilitating illegal entry and sexual offences.

Braverman is at the centre of a political storm in the UK after she resigned for a security breach while serving under former prime minister Liz Truss then was reappointed just six days later by Truss’ successor Rishi Sunak.

She has been criticised by opposition MPs for using incendiary language about migrants, calling the arrivals across the Channel in small boats an “invasion”.

At a parliament session on October 31, Braverman agreed with fellow Conservative MP Lee Anderson when he commented that “Albanian criminals” who are “coming to the UK across the Channel … can get on a dinghy and go straight back to France”.

She is also under scrutiny over the serious overcrowding at an asylum seeker processing centre at a disused airport in Manston, Kent. The centre was intended to hold 1,600 people but is currently housing around 4,000 after hundreds of people were moved there following the firebombing of another centre in nearby Dover.

This is on top of the chronic lack of resources at the Home Office, which according to the BBC currently has a backlog of 101,000 unresolved asylum cases.

Albania, like most other countries in Central and Southeast Europe, has experienced mass emigration over the last three decades.

By 2011, populations many countries in the Emerging Europe region  are projected by the UN to drop to levels not seen since the early 20th century, due to a combination of low birth rates and emigration.

Between 2000 and 2019, the population of Albania fell by more than 6%, with the ‘brain drain’ from the country hindering efforts to catch up economically with the EU members from the region. The working-age population of the Western Balkan countries will shrink by between 17% and 33% by 2050, according to a study from the Vienna Institute for International Economic Studies (wiiw).