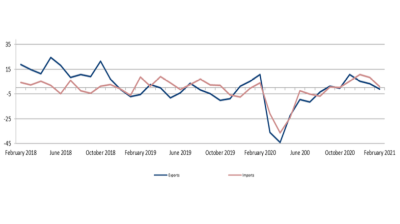 Imports shot up by 15% compared to January, to reach ALL52bn, and rose by a modest 0.9% y/y. The month-on-month increase in exports was a more modest 4.4%, while exports fell by 0.9% y/y, to ALL25bn, statistics office Instat said.

The y/y fall in exports in February was mainly caused by lower exports of textiles and footwear, a sector that has suffered since the start of the pandemic, and made a negative contribution of 7.6 percentage points (pp).

This was almost but not entirely offset by increases in exports of construction materials and metals, which made a 4.9 pp positive contributions, and smaller contributions from higher exports of food, beverages, tobacco, and chemical and plastic products.

The biggest contribution to the annual rise in imports was from the machinery, equipment spare parts category, which made a contribution of 4.0 pp. There were also increases in imports of chemical and plastic products, and food, beverages and tobacco.

On the other hand, there were negative contributions from lower imports of minerals, fuels and electricity; textiles and footwear; and leather and leather goods.

Kyrgyz consumer prices up 14% y/y in August
12 hours ago
Polish CPI surges 5.5% y/y in August
13 hours ago
Romania’s public debt rises by €3.9bn in July, but stays below 50% of GDP
1 day ago
Slovak inflation at its highest level since October 2012
1 day ago
Inflation in Moldova advances to 4.6% y/y as of August
2 days ago