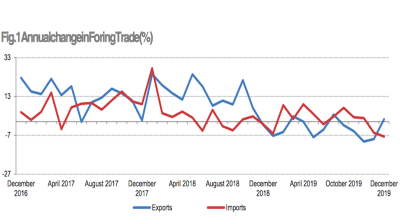 In 2018, Albania’s trade gap totalled ALL331bn, narrowing by 6.2% from a year earlier. Albania has historically run a substantial trade deficit caused by its narrow production and export base, and has partly funded this with remittances from Albanians living abroad.

The main group that influenced the increase of exports in December were: minerals, fuels and electricity (7.2 pp).