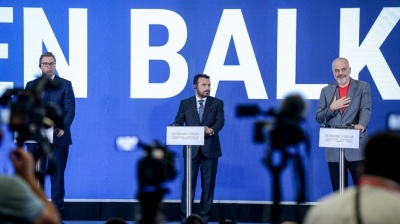 The leaders of Albania, North Macedonia and Serbia agreed in Skopje on July 29 to set up a joint border-free travel area by 2023, after the EU slowed down the integration process with the Western Balkans.

The idea is part of the ‘mini-Schengen’ initiative, a project aimed to improve economic and regional cooperation among the three Balkan countries, which was renamed ‘Open Balkan’ during the Economic Forum in Skopje.

"Instead of walls, today we built new bridges. An Open Balkan is moving forward. We will expand the cooperation in fields important for our citizens and our societies," North Macedonia’s Prime Minister Zoran Zaev said.

“We are committed more than ever to enforcing the four EU freedoms: free flow of goods, services, people and capital,” North Macedonia’s PM said.

Zaev expects the integrated regional market to result in additional GDP growth in the region.

Disappointed with the slow pace of EU enlargement, the three leaders decided to take own initiatives to improve the economic and regional cooperation

“Fully opening of borders among the three countries is an historic idea. The goal is our citizens to live better,” Vucic said at the forum.

“From Belgrade or Novi Sad we can go to Skopje and Ohrid, Tirana and Durres without any delays. If we manage to do that in a year and a half, I do not know if you understand, but that it is history,” Vucic said.

He invited Zaev and Rama to another meeting in Belgrade under the joint cooperation initiative in October or November, which will be followed by a similar event in Albania.

“For Albania this is a strategic initiative and we will continue with it,” Rama said in Skopje. He added that free flow of goods and services can be made with integrative system for paying VAT.

The participating countries also signed three documents that refer to a faster flow of goods and services, setting up a single labour market and on joint natural disaster action.

After their arrival in Skopje on July 28, Vucic and Rama together with Zaev and Skopje's mayor Petre Silegov walked through downtown Skopje. People stopped them on the square and some wanted to take selfies with the leaders, while others just greeted them.

Enemies in the past

Rama called on other countries in the region, Montenegro, Bosnia & Herzegovina and Kosovo, to join the initiative, saying he does not understand their motives for rejecting the idea.

Since the three countries launched mini-Schengen in 2019, some critics have said the initiative looks more like mini -Yugoslavia or like an idea to restore former Yugoslavia to some extend, in which Serbia as the biggest country will dominate the newly formed initiative.

Kosovo’s Prime Minister Albin Kurti in particular has been unenthusiastic about joining. On July 29 he dismissed the free economic area initiative by Albania, Serbia and North Macedonia as “visionless”, and called for the region to enter a trade agreement with the EU instead, Exit.al reported.

Kosovo is a former Serbian province, which unilaterally declared independence in 2008, but it is still not recognised by Belgrade as a separate country.

On the other hand, there has been a warming of relations between Tirana and Belgrade in recent years.

Vucic spoke at the forum about his first meeting with Rama when they saw each other as enemies only to gain political points, adding that things have changed  a lot since then.

“I remember the first meeting with Edi in 2015. Two enemies, finding enough excuses to offend each other. But today we don’t want to know about it anymore, but only about the common future,” Vucic was cited by Albanian Daily News.

“Serbs today fell better and safer in Albania. It's is the same for Albanians and Macedonians in Serbia. These are the messages we want to convey. The economic and social landscape will change,” Vucic was cited as saying.

Rama recalled that they were ready to enter a war for a football match, but that things are different now.

Rama underlined that he still does not agree with Vucic on the issue of Kosovo, but this cannot be an obstacle to cooperation in the economy.

A few days earlier, Vucic said in an interview with Financial Times that there’s enlargement fatigue in the EU.

The EU enlargement process stalled when Bulgaria vetoed the launch of EU accession talks with Skopje due to historic and language issues at the end of 2020, which also blocked Albania's EU accession progress. The two countries have been coupled together in the process and are not likely to be decoupled.