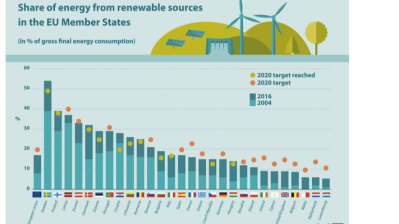 Around 85% of the electricity consumed in Albania in 2016 was generated from renewable sources, a compilation of data released by Eurostat at the end of September showed. This puts the Western Balkan nation that produces virtually all of its energy from hydropower ahead of all the EU member states and behind only Iceland and Norway in terms of the proportion of energy consumed from renewable sources.

Albania has long taken advantage of its many rivers to produce electricity. Some of the main hydropower infrastructure was built back in the communist era such as the Komani HPP on the Drin river, which provides some 65% of the country's electricity, although there have been more recent investments including by Norway’s Statkraft.

As a result, the aspiring EU member state — Albania was given candidate status in 2014 and is hoping to start negotiations next year — is well ahead of the bloc’s target of achieving 20% final energy consumption from renewable sources by 2020 across the union (individual national renewables targets range from 10% in Malta to 49% in Sweden).

In fact, the extremely rapid pace of investment into new hydropower facilities in Albania and other countries in the Western Balkans has drawn strong criticism from environmental groups, who are concerned about the impact on some of the last wild rivers in Europe.

Within the EU, the top countries measured in terms of the share of energy from renewable sources measured as a percentage of gross final energy consumption are Sweden, Finland and Latvia. 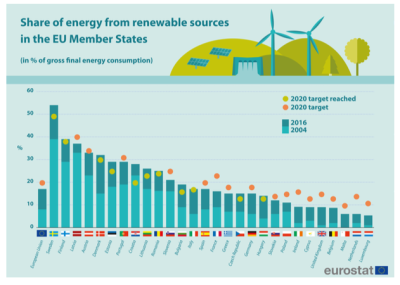 The data shows that Latvia was an early investor in renewables, making much of its progress before 2004, and increasing only modestly in the following 12 years, while as of 2016 it still fell slightly short of its 2020 target.

The Baltic state has invested heavily into biofuel and biogas, although it has also dabbled in hydropower and wind energy. According to data from the Central Statistical Bureau cited by Biofuels International, biofuel production grew almost 20 times in the decade between 2005 and 2015.

Among the other eastern EU member states, Estonia, Croatia, Lithuania and Romania all generate a substantial share of energy from renewable sources as a percentage of gross final energy consumption, and all four have already met their 2020 targets, according to Eurostat.

Romania, for example, saw an explosion of investment into new wind and solar power capacity in the earlier part of this decade, spurred on by a generous incentive scheme based on green certificates. However, successive governments have since scaled back the incentives, including for investors already committed to Romania, undermining the economic viability of numerous projects — along with investor confidence in the country.

At the other end of the scale, energy from renewable sources as a percentage of gross final energy consumption is relatively low in Poland, Slovakia and Hungary, though Hungary in particular made strong progress between 2004 and 2016.

More new investments have been announced recently in Hungary. MVM Hungarowind, a unit of the state-owned electricity firm MVM, plans to build 110 small solar power plants, with a maximum capacity of 0.5MW, as part of several projects across Hungary this year with European Union co-financing, the company said on August 29. The following month, Matrai Eromu, controlled by Prime Minister Viktor Orban's proxy Lorinc Meszaros, approved a long-term strategy that includes investments in renewable energy as well as energy storage.

In total, the Eurostat report finds that the primary production of renewable energy within the EU28 countries was 211mn tonnes of oil equivalent (toe) in 2016. This represented a 66.6% increase in the decade to 2016, or an average growth of 5.3% per year.

However, it should be noted that wood, and other solid biofuels and renewable wastes made up almost half of that total (49.4%). Other popular forms of renewable energy were hydropower (in second place with 14.3% of the total in 2016), followed by wind power (12.4%). 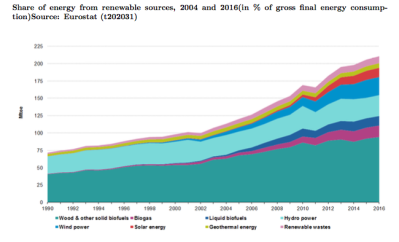 “Although their levels of production remained relatively low, there was a particularly rapid expansion in the output of wind and solar power, the latter accounting for a 6.3% share of the EU28’s renewable energy produced in 2016, while geothermal energy accounted for 3.2% of the total,” Eurostat’s report said. “There are currently very low levels of tide, wave and ocean energy production, with these technologies principally found in France and the United Kingdom.”

Russia imports almost 100% of its high precisions machine tools as the collapse of the Soviet Union destroyed it’s once legendary machine building sector. Since then there have been several technological leaps forward but Russia is still behind