Albania among fastest growing economies in SEE with 4.06% growth in 2018 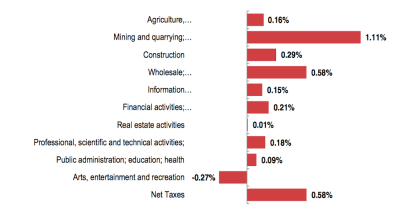 Contribution of the main branches of the economy to the real growth rate of GDP in 4Q18 over 4Q17
By bne IntelliNews March 31, 2019

Albania posted economic growth of a real 4.06% y/y in 2018, according to an estimate from the statistics institute Instat released on March 29.

Albania's economy expanded by an annual 3.84% in 2017. Currently, Albania is enjoying one of the fastest economic growth rates in the region. The government expects Albania to keep posting strong economic growth of 4.3% in 2019.

In the fourth quarter of 2018, the economic growth was 3.1% y/y, significantly down from a 4.48% y/y increase in the previous quarter, data showed.

Albania's economic growth in the fourth quarter was driven mainly by the electricity and water supply, which contributed 1.11 percentage points (pp), followed by the trade, transport, accommodation and food service sector (+0.58 pp) and construction (+0.29 pp), the data indicated.

The mining and quarrying sector sector posted the biggest annual growth of 9.94% in 4Q18, which was also the case in the previous three quarters.

One sector, art and entertainment, contracted y/y in the period under review, by 8.66%.

A breakdown of 4Q18 GDP figures showed that gross fixed capital formation went up by 1.87% y/y. Household final consumption, which accounts for an important part of the total economy, increased by 2.84% y/y, while general government consumption edged down by 0.05% y/y.

Polish industrial production continues boom in December
11 hours ago
Slovenia’s economic sentiment indicator up 2.2 pp m/m in January
8 hours ago
National Bank of Ukraine retains a key policy rate at 6%, the outlook of the CPI deteriorates
2 days ago
Russia's National Welfare Fund accounts for almost 12% of GDP
3 days ago
Bosnia's exports in 2020 amounted to BAM10.5bn, trade deficit to BAM6.3bn
4 days ago