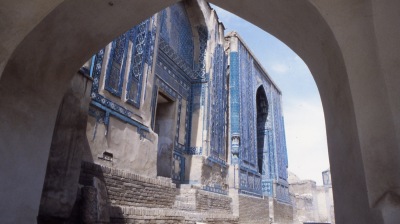 In Uzbekistan the key central bank interest rate has crossed the dividend return curve, which often means the market is about to dramatically re-rate / wiki
By Scott Osheroff in Singapore October 6, 2020

A “golden cross” is a chart technical analysis term in the investment industry referring to when the short-term moving average of a security crosses over a major long-term moving average, to the upside. Commonly, this is the 50-day moving average crossing above the 100 or 200 day-moving average, indicating bullish momentum and the start of an uptrend from a conservative standpoint as the uptrend would likely already be weeks old at this point.

In Uzbekistan things are expected to play out as in other frontier markets. The sustained slowing of inflation and an injection of foreign capital into the domestic banking sector would in time enable the Central Bank of Uzbekistan (CBU) to lower its policy rate. That means falling lending and deposit rates by banks, which in turn increases the attractiveness of listed equities on the Tashkent Stock Exchange (TSE) for local investors. It is still early days, but there are signs this is already starting to happen. The market activity on TSE has already begun to pick up.

Other frontier markets are prone to violent re-ratings, in a positive sense, -- especially in the equity and real estate markets -- it is worth looking for potential triggers to kick this process off. For example, real estate on the outskirts of Phnom Penh, Cambodia in 2014 – actually no more than rice paddies at the time -- was selling for $5/sqm at the time, but today the same paddy field is valued at over $200.

While every country re-rates in its own way, depending on the catalysts that drive the re-rating, on of the sparks that can set a rapid change in valuation off is when deposit rates fall below dividend yields on listed equities. And once the re-rating fire is alight it can burn for years.

This “golden crossover” has now happened in Uzbekistan. The deposit rates has already crossed the dividend yield curve and the spread between them is expected to continue to widen until more foreigners, who are increasingly arriving by opening brokerage accounts, and local investors wake up to the realization that one of the best investments to make in Uzbekistan today is in listed equities. 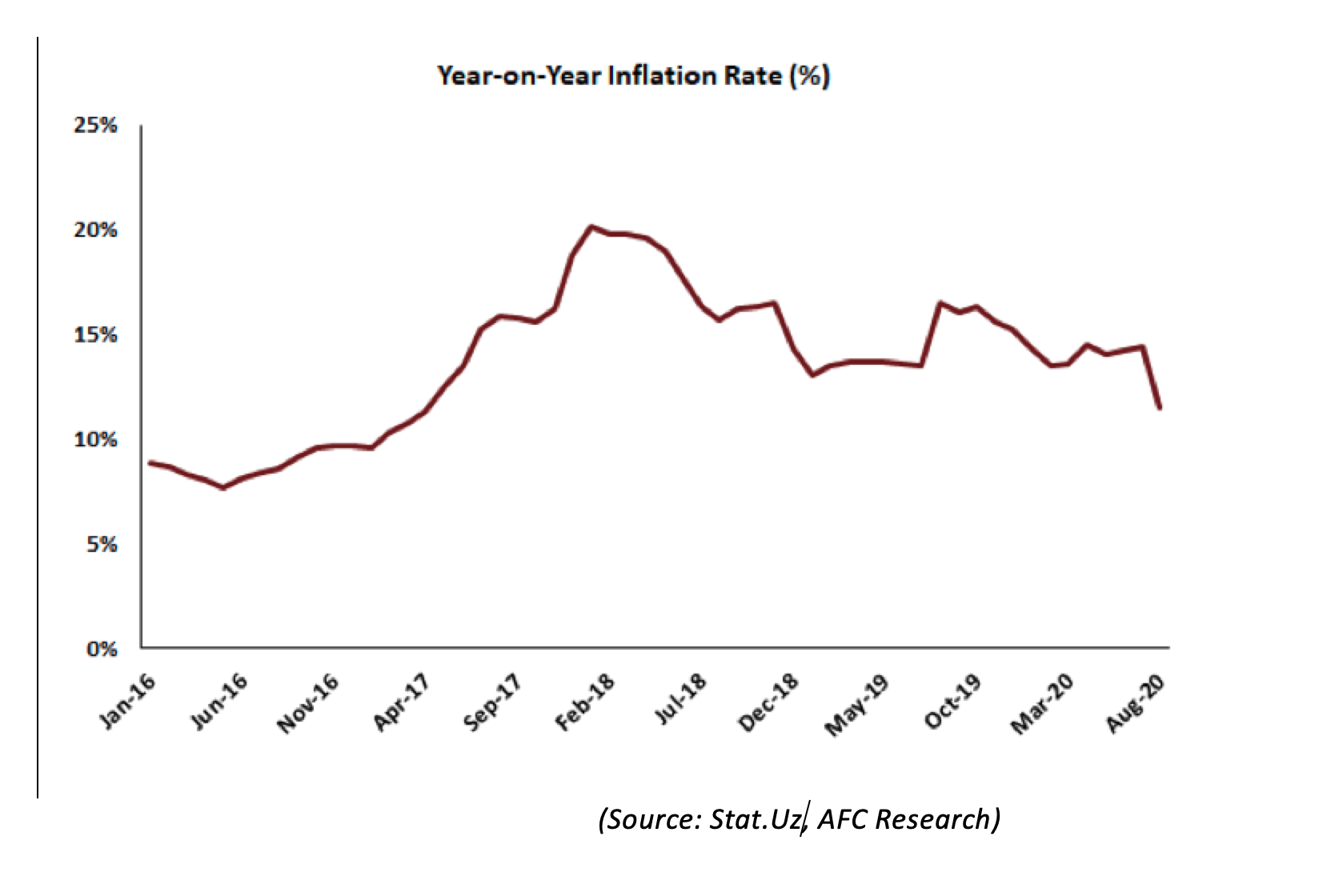 Courtesy of COVID-19, Uzbekistan’s GDP growth in 2020 is expected to slow to 1.5% from the previous World Bank estimate for  5.5% growth this year. The expected slowdown in GDP growth has seen demand for credit moderate and inflation fall (save for a short-term spike in various food-related commodities during the initial quarantine in March 2020 due to the closure of international borders).

Disinflation has enabled the CBU to lower its policy rate by 100 basis points on two separate occasions this year, falling from 16% to 14%. These cuts have led the average one-year term deposit rate for individuals at banks to fall from 20.3% in March to 16.4% in August. Businesses meanwhile are offered different (lower) deposit rates, which fell from 17.2% to 15.1% during the same period. As inflation continues to moderate and new banks enter Uzbekistan, while existing ones are able to increase their available capital for lending and competition for clientele should begin to drive down lending rates and in due course provide the CBU the means with, which to further cut its policy rate. 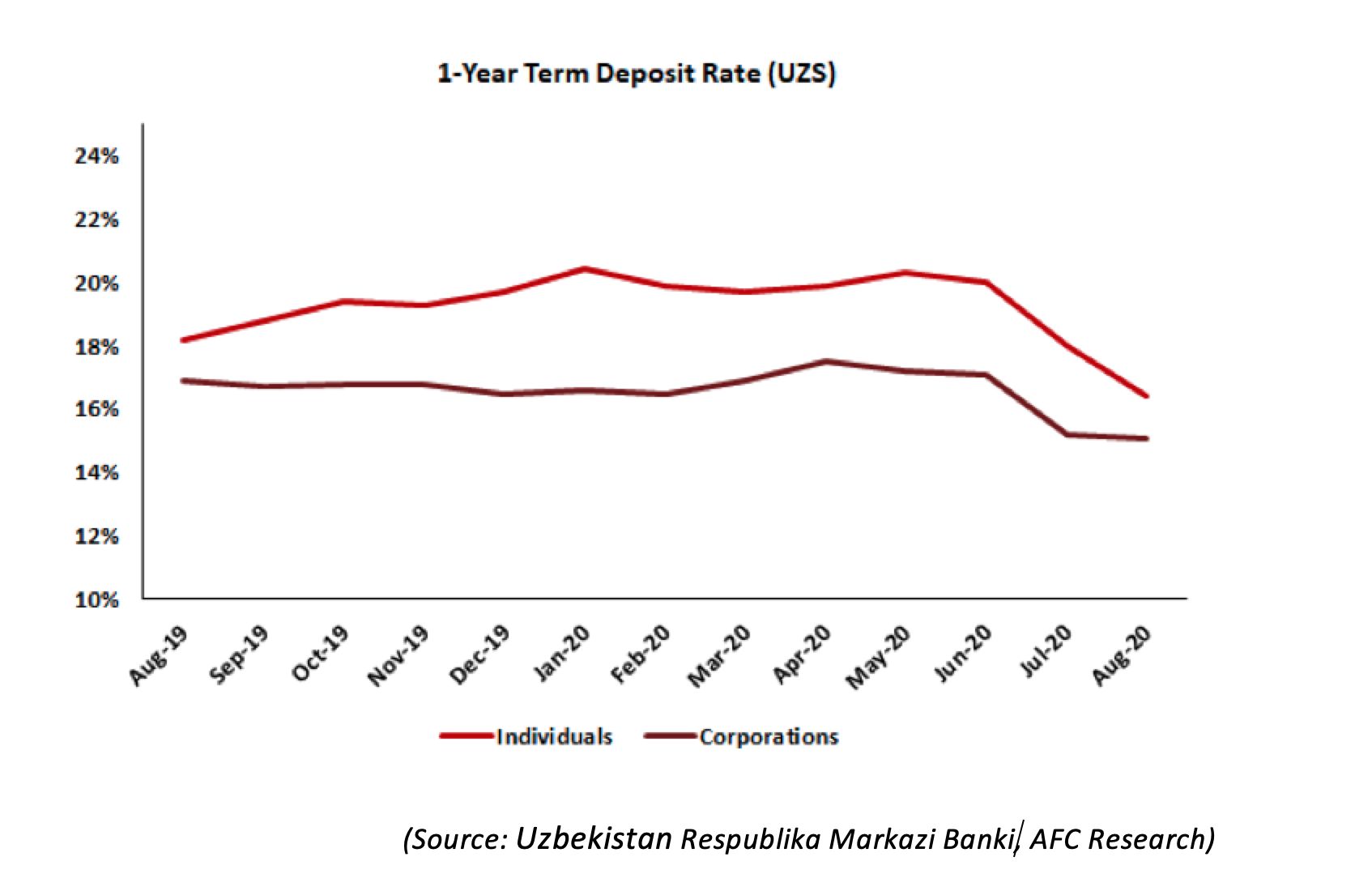 Likely in a bid to both slow credit growth – that in previous years was as high as 50% -- and inflation further, the CBU put a cap on bank lending rates of 21% and 24% from July 1, 2020 through to the year end for business and individual borrowers respectively. As such socialist policies are usually ineffective, lending has fallen precipitously and is likely to remain subdued until this cap is removed. While certainly not a free-market principle, it will be effective in moderating credit growth and subduing inflation, allowing the CBU to potentially cut the policy rate yet further, a situation, which would only make investing into the equities market that much more attractive.

What does all of this mean for the Tashkent Stock Exchange and the potential for listed equities? From an opportunity cost perspective, local individuals and corporations who currently prefer to invest their risk capital into term deposits can now receive significantly higher double-digit dividend yields from a multitude of listed equities. A typical excuse one will often encounter from locals in Central Asian countries when discussing the benefits of investing into exceptionally cheap listed equities with double-digit dividends is that the dividends are not high enough to justify the perceived risk of owning them, relative to term deposits. This is due to many local investors not understanding the risk-reward of investing in equities and view them simply as another fixed-income-type product where cash flow is all that matters. However, today even the relative cash flows favours investing into Uzbekistan’s listed equities.

The stage is now set. It is likely only a matter of time until the increasing foreign participation in the stock market and/or locals seeking high yield investment opportunities, triggers a more rapid and profound phase of re-rating .