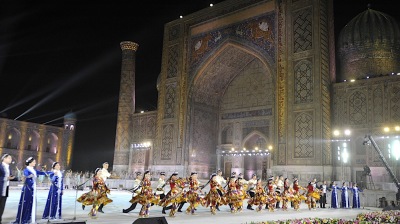 Capital Markets Reform is now a priority of Uzbekistan’s government, privatisations via the stock market are on the way / wiki
By Scott Osheroff in Singapore November 3, 2019

On October 7, 2019 Uzbek president Shavkat Mirziyoyev held a meeting with several ministers and public agencies, including the Capital Markets Development Agency, where he directed them to “consolidate all relevant laws, acts and decrees into single, simple and flexible capital markets code by the end of 2020.” The attention now being paid to the development of the Uzbek capital markets is a key ingredient, which should lead to more market depth and liquidity in both the stock market and the nascent corporate and government bonds markets.

As the government executes its privatization program by completing partial or full divestments of most state-owned enterprises (SOEs), the stock market is the preferred mechanism for this and is expected to lead to higher free floats and a subsequent increase in liquidity and market capitalization.

During his meeting, the president instructed the regulator to create a stock market development strategy for the period 2020 to 2025, which includes seeing the free float of the Tashkent Stock Exchange reaching 10-15% of GDP by 2022.

This will initially be driven by the privatization of SOE’s. However, as SOE’s are privatized and liquidity increases, helping to instigate a re-rating in the stock market, one of the second order effects of this includes private companies increasingly looking to the stock exchange in order to raise growth capital as they will be able to command higher multiples than in today’s stock market and forego high cost bank loans, which currently cost 20% to 25% per year in local currency.

Several companies in the pharmaceutical, financial services and manufacturing industries have already begun researching the potential of an IPO and it would not be unforeseen to have this number increase markedly over the coming years.

The domestic corporate bond market is currently very immature, though one near term catalyst to invigorate it is the government’s desire to start holding regular auctions of T-bills and treasuries that has been done with such success in other markets like Russia and more recently in Georgia and Ukraine.

As currently only commercial banks can buy government bonds, the market is expected to be liberalized in the near future where local retail and institutional investors will be able to participate. By creating more demand for government debt, the government should be effective in creating a local yield curve, which will make it easier for corporates to issue debt.

A further catalyst for the development of the domestic debt and equity markets will be a change in legislation, which currently prohibits banks from investing into the stock market. With new institutional interest in the stock exchange, this could add further liquidity to the market.

Over the next several months strategic stakes, often greater than 51%, in listed companies are being put up for auction, mainly in the industries of wine and vegetable oil production. However, numerous companies in the oil & gas industry are also slated for eventual privatization, among others.

In relation to listed equities, the government is preparing to sell down a 5% equity stake in JSC Kvarts (TSE: KVTS), the largest glass manufacturer in Uzbekistan and also the first company to IPO on the Tashkent Stock Exchange. The sell-down of this 5% tranche is part of a medium-term plan to sell up to 20% of the company through the stock exchange, thereby increasing the free float of the company.

The Uzbek Commodities Exchange (TSE: URTS) has also announced that the government will be selling down its stake in their company. URTS is the largest commodities exchange in Uzbekistan with annual turnover of $13.8mn. Two state-owned companies, O'zbekiston metallurgiya kombinati (TSE: UZMK) and Olmaliq kon-metallurgiya kombinati (TSE: AGMK) each own 6% of URTS and will be selling their shares total of 12% through a secondary public offering (SPO). Following this SPO the government will be left with 26% of the company.

(Disclaimer: As of 4th November 2019, the AFC Uzbekistan Fund held positions in KVTS, URTS and UZMK.)

Scott Osheroff is the CIO of the Asia Frontier Capital (AFC) Uzbekistan Fund, which was launched on March 29, 2019 and aims to achieve long-term capital appreciation for investors by capturing the value and growth potential in the recently liberalized economy of Uzbekistan.

Russia forges ahead with gas ambitions in Uzbekistan, Kazakhstan
bneGREEN: Renewable energy was a hot topic in Davos but for Europe, much work remains
Big freeze that was feared by gas hungry Europe hits Central Asia, Iran

PANNIER: A very Turkmen coup
2 days ago
OPINION: Bulgaria sets itself a tough task with Burgas-Alexandroupolis pipeline revival
6 days ago
NEMETHY: Is Ukraine War the beginning of World War III?
6 days ago
RIDDLE: The Russian army in 2023
7 days ago
‘Yesterday’s strategy won’t do’ in Europe’s approach to Iran says Carnegie analyst
11 days ago