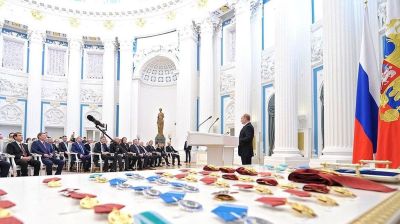 Book Expedition would not strike the casual passer-by as anything special, and certainly not an integral component of the Russian state. Located in Kitai Gorod, the oldest part of central Moscow, the shop sells books and souvenirs to tourists wandering in one of the few really charming parts of the Russian capital.

But it is special – it is owned by the Directorate for Presidential Affairs and stands next door to the offices of its owner. As a result Book Expedition has a Federal Protection Service (FSO) agent constantly watching its front door, the elite of Russia’s security services and equivalent of the US Secret Service tasked with protecting the president among other things.

No one stops you entering the store. Heavy drapes hang in the door and windows but the atmosphere inside is snug compared to the sub-zero temperatures on the street outside. Eager saleswomen proudly show off luxurious hunting knives decorated with the emblems of the Russia Federation, the “Kremlin” and “VDV” (a Russian paratrooper division) branded eau de toilette, or the more run-of-the-mill calendars, watches and President Vladimir Putin biographies.

Thanks to its elite owner, Book Expedition was named in a decree signed by Prime Minister Dmitry Medvedev as one of the country’s 64 state corporations – out of a total of 1120 “Federal State Unitary Enterprises” – that are “significant in order to ensure the rights and legal interests of Russian citizen as well as the defence and security of the State”.

The list was produced as a result of recent ambitious legislation passed by the government in its efforts to bring more transparency into public procurement and stop the large-scale looting by corrupt bureaucrats that has been going on for decades.

It becomes more understandable why the company was included in the list if you look up its branches. Its flagship store is on Varvarskaya Street, close to the sprawling government buildings clustered around Red Square. However, several other branches of the store are actually inside other government buildings, including those of the White House, the Presidential Administration, the Federal Assembly, the State Duma, the Central Bank of Russia and the iconic Stalin skyscraper on Smolensk Square that houses the foreign ministry.

But other than its prestigious locations, there doesn’t seem much else to commend Book Expedition for inclusion on the list of exempted companies. In all, there are 64 state corporations on the list that will not be forced to conform to the new more draconian transparency and anti-graft legislation.

“This includes an almost unrestricted choice of supplier instead of a public tender in electronic form, more speedy timing, flexible price-setting and non-mandatory audit of procurement,” Anton Nakou, a Moscow-based lawyer at Finnish law firm Castren & Snellman, tells bne IntelliNews. The generalisation of electronic procedures has been described by anti-corruption organisations as one of the key reforms in the fight against corruption in public procurement.

Media reports have mostly focused on the presence on the list of several Russian state media, including the All-Russia State Television and Radio Broadcasting Company (VGTRK), a group that owns TV channels such as Rossiya 1, one of the most popular in the country, as well as the news agency TASS. Rossiya Sevodnya also made it onto the list, a holding company that controls the newly-minted Sputnik news agency and its older sister the RIA news agency, as well as the notorious RT English-language TV station.

However, as shown in the complete list compiled by bne IntelliNews,(see below), the order signed by Medvedev goes well beyond state media and covers several sectors, with a particular emphasis on construction and repair firms, cybersecurity and information technology.

In drawing up the list, the Russian parliament voted though an amendment to the current law on public procurement. The first version of the bill, discussed in the Duma in December, specifically referred to “federal state unitary enterprises engaged in the distribution of mass media” – a reference to state media that was removed in later versions of the bill, allowing potentially any state corporation to be exempt from usual procurement rules.

Of the 64 firms on the list, a total of 11 are directly owned by the Ministry of Defence, while another nine belong to the Directorate for Presidential Affairs. Security agencies are also well represented: out of 13 state firms owned by the Federal Security Service (FSB), nine were included in the list, as well as two of the three state firms owned by the FSO. The list of FSB-linked firms includes several “research institutes” in the field of cybersecurity, as well as Gostinitsa, which provides housing for agents from the FSB and other state agencies.

Some of the other names on the list are more serious companies, the most significant being Rosatom, the state monopoly for nuclear power. Twelve firms belonging to the agency are now considered “significant to ensure… the security of the State” out of a total of 25 firms. This includes Rosatom’s two “federal nuclear centres”, Russia’s main facilities for the development of nuclear weapons, as well as Atomflot, which controls the country’s fleet of civilian nuclear icebreakers.

Though most of the firms in the list seem to fit the description of strategic assets, there are some other eyebrow-raisers of the same ilk as Book Expedition. A Kaliningrad-based printing house was also included, as well as a defence ministry company dedicated to the “protection of historical objects”.

The decree gives no details about on what basis companies are selected for inclusion and it appears some vigorous lobbying was involved in the drawing up of the final version. A source close to the Russian government told Russian daily Kommersant that, in addition to the security argument, some firms were added because the switch to the new public procurement system “could threaten their competitiveness”.

The exemption list comes as a disappointment, say investors and campaigners, as the government appears committed to doing something about the level of corruption and the new state procurement system is the spearhead of that effort. Tenders are now obligatory on all state orders and state-owned companies have to seek special permission to hold a tender with only one bidder. Almost all the bidding process has been put into the cloud; computerising government services like paying taxes and procurement is turning out to be something that Russia is actually good at. The entire tax administration’s IT system was upgraded last year, which led directly to an improved tax take.

Likewise, President Vladimir Putin himself introduced a rule several years ago that bans state entities from signing contracts with companies where the beneficial owner cannot be identified – aimed at killing the scam where government company bosses sign deals with companies owned by their wives. When the rule went into effect in 2013, some 60% of state orders had to be cancelled.

But the results have been mixed, partly because “state bodies are still reluctant to use all the instruments available and to follow the procedures”, says Nakou.

Russia saw almost no improvement in its standing in the last Transparency International Corruption Perceptions Index and remains ranked at the bottom of the list in Europe. Likewise, Russia’s Federal Antimonopoly Services (FAS) slated the government in a report it was asked to prepare on Russia’s competitiveness that was published on February 7, saying the state companies should stop buying companies and start selling non-core assets as the government itself is the biggest impediment to increasing competition, Vedomosti reported.

Though the exemption list currently comprises a limited number of state corporations, more could be added in the future, prompting fears that this could be used by state officials to wiggle out of the obligations the government is trying to impose on the bureaucracy. Nikolai Arefiev, a deputy from the Communist Party, told Kommersant that the bill amounted to “a law on how to bypass the procurement system”.