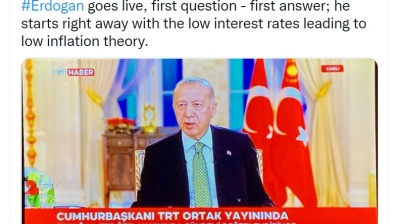 A country releasing a 3Q GDP growth figure of 7.4% y/y (11.7% y/y in in 1Q-3Q) would normally enjoy a day of encouraging headlines but that was not the case for Turkey on November 30 as the snowball effect of what is increasingly being referred to as the “Erdogan currency crisis” produced another slew of articles with little else but warnings of more doom on the horizon.

Readers of The Wall Street Journal were given the opportunity to read all about “The Erdogan Lira Crisis”, The New York Times went with “Our Money Has No Value: Frustration Rises in Turkey at Lira Crisis”, and, no surprise this one, Reuters by the end of November 30 was reporting that “Turkey’s lira fell to an all-time low of 14 [rounded up from 13.7542] versus the dollar on Tuesday after President Recep Tayyip Erdogan repeated his defence of a new economic model based on lower interest rates despite inflation near 20%.” 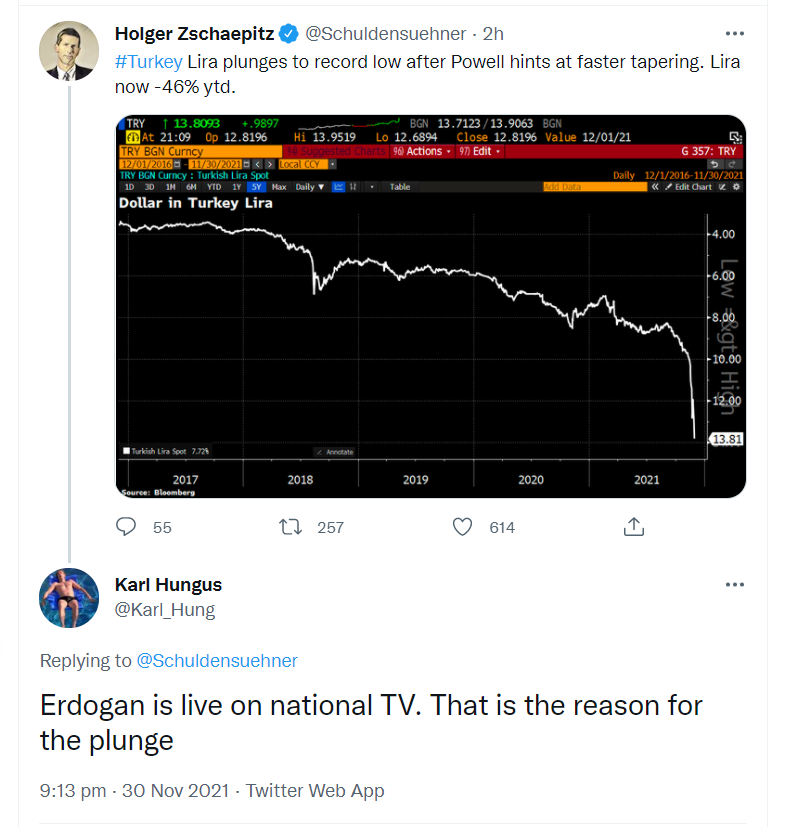 The decision of Erdogan to plunge Turkey into the crisis by cutting rates when all conventional economic wisdom says he should be hiking them is at once menacing—has the strongman decided the only chance he has of hanging on to power is to provoke a showdown with opponents in which he goes “full regime”?—and a reminder that little can be taken at face value when it comes to Turkey nowadays. The GDP figures are a case in point. In the past couple of years, mistrust at the macroeconomic data being put out by Turkish officials has grown widespread. Inflation is usually cited here, with respected academics in Istanbul arguing that annual inflation does not stand at 20% as officially stated but at around 50% (for those readers only now spotting the growing number of articles on Turkey facing hyperinflation, there was an argument made months ago that the nation was already mired in it), but the GDP data too is causing much consternation.

Ahead of the curve

With a droll appreciation of how the Erdogan administration typically over several weeks builds up to its ‘boomtastic’ GDP announcement, the main Turkey correspondent of this publication always mockingly stays ahead of the curve. For instance, on November 4, President Recep Tayyip Erdogan said the country looked sure to release a double-digit growth rate for 2021. On November 18, our correspondent noted: “This does not mean that the public ‘bidding’ on the rate has ended. Far from it, it will come on stronger and stronger in the run-up to the GDP announcement date in March 2022. So, this publication is raising its expectation to 15%.”

Data from the Erdogan regime does not deserve any more seriousness. If Erdogan did not want to get to this juncture, his administration would perhaps have not interfered with the staffing of the central and regional offices of the Turkish Statistical Institute (TUIK, or TurkStat) the way he has done.

If you use macroeconomic statistics in real life, avoid planning or pricing based on TUIK data.

For those who want to go with Turkey’s 3Q growth figures, then the story is that Turkey has again released the second highest official GDP growth expansion of G20 members. This time it's not China, but India that has charged out in front with 8.5%. Turkey, bless Erdogan’s cotton socks, prefers to take second place to avoid raising the flag on too much exaggeration.

Alas, for the lira, second place is not an option. Having plunged 46% versus the dollar in the year to date, it is by far the worst performing emerging market currency of 2021. Erdogan may be doubling down in fighting his “economic war of independence” but double-digit headline GDP growth combined with his upside-down monetary policy will not get him very far, especially with more hints from the Fed that in the face of higher inflation it is set to go for faster tapering of asset purchases, a move that would suck capital away from emerging markets. For 2022, the big banks, assessing the longer and bigger picture, have been trimming their forecasts for Turkish GDP, Goldman Sachs, for instance, dropping half a point to move to anticipated 3.5%.

The damage being wrought by the lira’s stunning freefall is too immense to allow Turkey to serenely power on into the future with turbo-charged growth.

"Lower rates might deliver high real GDP growth but at the price of a weaker currency, higher inflation and longer term concerns about macro financial stability," said Timothy Ash, a veteran Turkey watcher at BlueBay Asset Management, adding: "The longer these settings are maintained the greater the risk of a systemic economic crisis in Turkey—particular risks there of inflation spiralling out of control and a bank run."

Looking a little more at the TUIK detail, 3Q growth officially moved up 2.7% q/q on a seasonally and calendar-adjusted basis, while Q2 growth was revised to a massive 22.0% y/y from an initial 21.7% y/y.

"Strong real GDP growth, as expected. But at what cost?" added Ash.

There lies the rub.

“With the current acute lira selloff akin to the 2018 [currency crisis] episode which triggered a recession, our expectation is for the growth momentum to markedly weaken in the quarters ahead owing to higher FX volatility and a decline in purchasing power,” Ehsan Khoman, head of emerging market research for Europe, Middle East and Africa at MUFG Bank in Dubai, was quoted as saying by Aljazeera after the growth data release.

Another who was having no trouble tearing his gaze away from the robust GDP figures was Inanc Sozer, an economist at Istanbul-based Virtus Glocal Consulting, who said that the economy could even contract next year if the central bank continued on its current path of monetary easing.

The next rate-setting meeting of the Turkish central bank deserves circling. It’s December 16, should Turkey’s economy make it that far.

Belarus’ turn to China
6 hours ago
East and West clash in Bulgaria’s snap general election
18 hours ago
Old faces set to keep ruling Bosnia post-election
1 day ago
Georgia’s border clogged with thousands of Russians fleeing the Kremlin’s mobilisation
1 day ago
Meloni won the elections, but her programme won’t make Italy the next Hungary
1 day ago