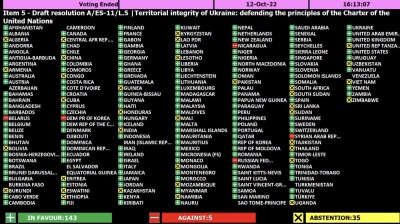 Members of the UN overwhelmingly voted to condemn Russia’s annexation of four Ukrainian regions on October 12, with some of Russia’s earlier supporters also joining the motion to censure the move.

A total of 143 counties voted in favour of the motion, five voted against and 35 abstained. Amongst Russia’s supporters both India and China abstained again as they have in the previous two UN votes, to condemn the invasion of Ukraine in February and to remove Russia from the UN Human Rights Council. China is performing a delicate balancing act between backing Russia and protecting its commercial relations with the West. India has emerged as a Russian supporter and one of its biggest customers for sanctions-defying oil exports.

The countries that voted against the motion were Belarus, North Korea, Nicaragua and Syria in addition to Russia itself.

The United Nations General Assembly on Wednesday overwhelmingly voted to condemn Russia's annexation of parts of Ukraine after Moscow vetoed a similar effort in the Security Council.

As in previous votes, the other countries abstaining from the vote included all of the Central Asian countries and many in Africa which have commercial ties with Russia. In particular, South Africa and Pakistan both abstained, despite a major US diplomatic push to rally the vote against Russia.

Importantly, a number of Russian aligned countries that chose to abstain in the two previous votes this time voted to condemn Russia, including Egypt, Myanmar, Iraq, UAE and Serbia, which are seen as amongst Russia’s strongest supporters. Also the African country of Eritrea has been one of the few countries to vote against Russia in the previous two votes, but this time switched to an abstention in another surprise.

The UN General Assembly vote on March 3 to condemn Russia’s invasion of Ukraine went almost unanimously against Russia, with only five countries voting against the motion: Belarus, Syria, North Korea and Eritrea. China and India both chose to abstain rather than vote against the motion. A total of 141 voted for that motion and 35 abstained.

The resolution "condemns the organisation by the Russian Federation of so-called referendums within the internationally recognised borders of Ukraine" and "the attempted illegal annexation" of four regions by President Vladimir Putin. The motion also demanded that Moscow "immediately and unconditionally reverse" its annexation decisions.

The US ambassador to the United Nations, Linda Thomas-Greenfield, had urged all nations to send a message that the world "will not tolerate seizing a neighbour’s land by force."

"Today it is Russia invading Ukraine. But tomorrow it could be another nation whose territory is violated. It could be you. You could be next. What would you expect from this chamber?" she said, the Moscow Times reports.

The US vigorously lobbied amongst Russia’s supporters to win their support in the latest vote, expending a lot of energy on India in particular. Diplomatic activity is particularly intense at the moment as the West revs up to impose an oil price cap scheme in December that is designed to cut the Kremlin off from its oil export revenues, but will very likely fail if big customers like India refuse to participate. The US has also been actively lobbying against Russia in Africa where the Kremlin has many friends, and will hold a large Africa summit in Washington in December.

The US campaign to isolate Russia and undermine its hydrocarbon business took a big blow last week when the OPEC+ oil cartel agreed to cut oil production by 2mn barrels per day (bpd) despite intense US pressure to increase production and lower oil prices just as the US goes into its mid-term elections. On the day of the UN vote US President Joe Biden repeated earlier remarks that the White House may see the decision as a “hostile act” by Kingdom of Saudi Arabia (KSA) against the US and in support of Russia.

Bangladesh, Iraq and Senegal – which abstained in March – also changed their vote to condemn Russia.

Eritrea, one of the world's most closed states, moved from a 'no' to an abstention, while Nicaragua, under growing international pressure over human rights, switched from abstaining to voting 'no', the Moscow Times reports.

"South Africa considers the territorial integrity of states and that of Ukraine to be sacrosanct, and we reject all actions that undermine the purposes and principles of the UN Charter and international law," said South Africa's representative, Mathu Joyini, as cited by the Moscow Times.

"We have abstained on the resolution because we believe that the objective of this assembly in keeping with its mandate must always be to contribute to a constructive outcome conducive to the creation of sustainable peace in Ukraine," she said.

India's envoy, Ruchira Kamboj, said that "the entire Global South has suffered a substantial collateral damage" from the war and that "pressing issues" were not addressed in the resolution.

Bangladesh, explaining its move to condemn Russia, said that the international community should also stand firm against any attempt by Israel to annex occupied Palestinian territory.

"We strongly believe that the purposes and principles of the UN Charter regarding respect for sovereignty and territorial integrity and peaceful settlement of all disputes must be complied universally for everyone, everywhere, under all circumstances," said Bangladesh's ambassador, Muhammad Abdul Muhith.

In total two more countries voted to condemn Russia’s annexation of the Ukrainian regions than voted to condemn the invasion in February, with a total vote count of 143 vs 141 respectively.