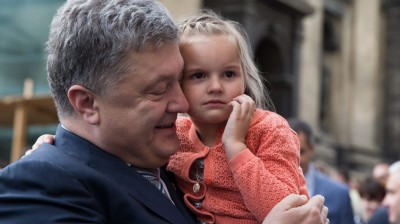 With only two weeks to go to the presidential election President Petro Poroshenko has been plagued by corruption scandals. / bne IntelliNews
By Graham Stack in Kyiv March 14, 2019

Another corruption scandal has broken out around Ukraine’s embattled President Petro Poroshenko, only two weeks away from presidential elections, via a massive leak of hacked files. Under the title “Ukrainian Papers”, the leak contains thousands of documents and correspondence relating to Poroshenko’s offshore business empire, his business partners and political allies Oleg Hladkovskiy and Ihor Kononenko, and their managers Sergii Zaitsev and Dmytro Lytvynets.

The leak comes shortly after a similar leak prompted Poroshenko to dismiss his business partner and deputy head of the National Security and Defence Council Hladkovskiy on March 4. Journalists accused Hladkovskiy of embezzlement from the army, which he denies.

In the meantime it is Poroshenko and his pals’ offshore empire that is currently attracting attention, since the revelations of the Panama Papers covering Poroshenko's and his colleagues' extensive use of offshores have made this a favourite topic. Public sensitivity is high over allegations that Poroshenko has been trading with “the enemy” Russia, and has split loyalties deriving from offshores.

There is no guarantee of the authenticity of the data, except its sheer scale. In addition, previous leaks such as the Panama Papers, as well as of loan and deposit data for Poroshenko’s Ukrainian pocket bank International Investment Bank (IIB) obtained by bne IntelliNews in 2016, provide some reference points for cross checking.

A first glance at the data indeed shows that Poroshenko’s pals’ network of offshores extends far further than previously known. Previous investigations by bne IntelliNews and OCCRP pointed to a handful of Cyprus and British Virgin Islands firms banking in Vienna. But “Ukrainian Papers” shows there are over a dozen such shell firms, with Viennese accounts, and some more banking in Latvia and Cyprus.

Many of these are formally owned by Serhii Zaitsev, one of Poroshenko’s top managers at the chocolate factory Roshen. Others are owned by Oleh Hladkovskiy, whom Poroshenko fired from his post of deputy head of the National Security and Defence Council over corruption allegations on March 4.

Vienna-based manager Dmytro Lytvynets acts as director for both Zaitsev and Hladkovskiy’s firms, which also have the same incorporation agent, according to the leaked documents.

Zaitsev has always denied owning offshores on behalf of Poroshenko. "I have, and had, my own business interests and projects, for which I have set up a number of companies," he told Interfax Ukraine in 2016.

There are also signs that the Zaitsev-owned offshores have received funds from questionable sources. One previously unknown firm is for instance Halpane Consulting Corp, set up in 2015 in the British Virgin Islands, owned on paper by Zaitsev and banking in Vienna.

According to a contract found among the leaked files, in July 2016 Halpane received exactly $1mn from a Panamanian offshore, Petron Holding Corp, banking at Latvian bank Regional Investment Bank. The payment was documented as being for the delivery of five tractors.

Ukraine’s National Anti-Corruption Bureau (NABU) investigated Petron in 2016, alleging it was being used to embezzle money from the giant state-owned chemicals plant, Odesa Portside Plant, one of Ukraine’s largest exporters, according to court documents. The investigation has since stalled.

Zaitsev could not be reached for comment on the transaction. Lytvynets was not answering his phone.

The leaks documents contain further clues that Poroshenko’s pals used shadowy channels to move money around offshore. One of Zaitsev’s offshores, Laurent Services Ltd, banked with now defunct Latvian offshore bank ABLV that collapsed last year after being caught in the centre of a huge money laundering scandal. Laurent Services was apparently used to shift money around between the offshores and other businesses under the pretext of loan agreements, according to an officer at ABLV quoted in the documents.

In 2017, Latvian regulators fined ABLV for breach of UN North Korea sanctions. In February 2018, US anti-money laundering agency Fintech accused ABLV of “institutionalised money laundering”, and cut it off from dollar transactions. The bank is now self-liquidating as a result.

Ironically, despite the money laundering allegations against ABLV, it was ABLV that was tough on offshores owned by Zaitsev and Hladkovskiy. In 2016 ABLV refused to carry out transactions between them in which an ABLV officer could “see no [business] sense.”

In the correspondence, Dmytro tries to persuade ABLV to make payments from Zaitsev’s Laurent Services to HUDC Holding, a Cyprus firm owned by Hladkovskiy. The pretext for the transaction were payments on loans extended from one to the other. But ABLV’s officer — feeling the pressure from US regulators — now declined to carry out transactions it may have previously allowed. “Why are you giving a loan to a company that still owes you money?” she asked.

“On the phone you said you owned the company, I need confirmation of this,” says the ABLV officer finally. “I meant ‘we’ own it, not me personally,” Dmytro explains. The ABLV officer then asked for the account to be closed.

According to the anonymous organisers of the leaks, this is exactly what they show. “Poroshenko’s offshores trade with Russia’s Novoschakhtinsk refinery, which was supplying fuel to the occupied territories [in Donbas] of LNR [the Luhansk People's Republic] and DNR [Donetsk People's Republic],” they wrote in a guide to the documents for journalists.

Who is behind Ukrainian Papers? The link to the Ukrainian Papers site was first posted by journalist Oleksandr Dubinskiy. “I expected something like this before the elections, but I didn’t expect anything of this scale,” Dubinskiy wrote.

Dubinskiy is a star journalist on oligarch Ihor Kolomoisky’s TV channel 1+1, but denies acting on behalf of Kolomoisky. Poroshenko nationalised Kolomoisky’s PrivatBank in December 2016, after a cover story by bne IntelliNews “Privat investigations” exposed the extent of stealing in the form of fake loans made to shell companies belonging to the owners. Kolomoisky disputes the nationalisation, calling it a “corporate raid.”

A cyber security expert who requested be unnamed said "while the scale of the data is massive putting it in the public domain seems more likely the work of hactivists."

Kolomoisky is now regarded as backing another 1+1 TV star, actor Volodymyr Zelenskiy, for the presidency. With the banking of 1+1, Zelenskiy has surged to take the lead in opinion polls, with recent polls showing Poroshenko dropping back into third place. Third place in the first round of voting on March 31 would end Poroshenko’s tenure. “Zelenskiy is the leader with a stable rating of around 25% of active voters and a clear lead ahead of the rest … And among undecided voters, one third say they trust Zelenskiy,” says Volodymyr Fesenko, political scientist at Penta research lab.

KYIV BLOG: Pragmatic appeasement vs doing what is right
Ukraine's IT hub is thriving in Transcarpathia
Belarus announces next stage in “surprise inspection” of its armed forces

Hungarian government declares another state of emergency
23 hours ago
Russian bond defaults could soar after US lets payment exemption expire
23 hours ago
Lira drags Turkey further down road to hell
1 day ago
No progress in talks between Bulgaria, North Macedonia on lifting veto on EU accession talks
1 day ago
Former Moldovan president Dodon detained in treason and corruption case
1 day ago