Ukraine will not pursue Nato membership 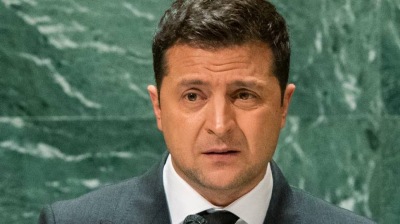 Ukraine will not pursue Nato membership and may also concede the independence of the Donbas regions to Russia
By Dominic Culverwell in Berlin March 8, 2022

Ukrainian President Volodymyr Zelenskiy announced Ukraine would no longer pursue Nato membership in an interview with ABC News on 7 March.

The announcement comes days after Zelenskiy lambasted Nato for failing to come to Ukraine’s aid by closing the skies to Russian aviation.

Wearing his now trademark military t-shirt and fleece, Zelenskiy told ABC News: "I have cooled down regarding this question a long time ago after we understood that Nato is not prepared to accept Ukraine”.

He accused the Alliance of being “afraid of controversial things” and “scared of confrontation with Russia.”

Previously in his angry diatribe against Nato after it refused to close Ukraine’s skies to Russian planes, Zelenskiy said that each Ukraine that dies from that day will be “Nato’s fault.”

Zelenskiy appears bitterly disappointed with the lack of decisive military aid from the west, despite having received hundreds of millions of dollar worth of handheld missiles and sever sanctions imposed by the west on Russia.

In the same interview Zelenskiy suggested that he might concede the independence of Donetsk and Luhansk regions, which is another of Russia’s key demands.

Zelenskiy said he is open to "compromise" on the status of two breakaway pro-Russian territories that President Vladimir Putin recognized as independent just before unleashing the invasion on February 24.

When ABC asked him about this Russian demand, Zelenskiy said he was open to dialogue.

He said these two regions "have not been recognized by anyone but Russia, these pseudo republics. But we can discuss and find the compromise on how these territories will live on.”

"What is important to me is how the people in those territories are going to live who want to be part of Ukraine,

The decision will significantly weigh in Russia’s favour, as Russian President Vladimir Putin has strongly demanded Nato, which it views as a significant threat, not to offer Ukraine membership.

Although Zelenskiy previously stated a desire to join the Alliance, this has changed in the last few days due to Nato’s recent lack of action in both aiding Ukraine militarily and offering membership.

Speaking to ABC, he said does not want to be president of a "country which is begging [for] something on its knees.”

In a scathing message directed at Nato on March 4, the Ukrainian President said: “All the people who will die starting from this day will also die because of you. Because of your weakness, because of your disunity," going on to say that the only thing that Nato has sent Ukraine is 50 tonnes of diesel fuel.

The Kremlin has remained steadfast in its call for the end of Nato expansion, including it in an eight-point list of demands which was given to the US in December 2021.

Russia reiterated this point at the peace talks with Ukraine on March 7, as well as demanding Ukraine recognise Crimea as Russian territory and the Donetsk and Luhansk regions as independent.

Zelenskiy told ABC News that he is “open to dialogue” with Russia.

He mentioned that it's down to “President Putin to start talking, start the dialogue instead of living in the informational bubble without oxygen”.

Although the third round of peace talks held on the border with Belarus broke up after three hours with no breakthrough, some progress was made.