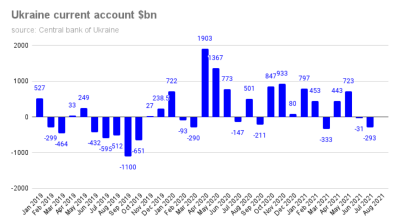 Ukraine’s current account (C/A) deficit amounted to $293mn in July, enlarging from a $31mn deficit (revised from a previously reported surplus of $295mn) in the previous month mostly due to a deteriorated trade balance, the National Bank of Ukraine (NBU) preliminarily reported on August 31.

The goods trade deficit amounted to $578mn (vs. a $327mn deficit in June), while the surplus of trade in services increased to $332mn from $316mn in June. The deficit of the primary income balance enlarged to $439mn from $371mn (revised from previously reported deficit of $55mn) in the prior month. The surplus of the secondary income balance increased to $392mn from $321mn in June.

The surplus of Ukraine’s balance of payments amounted to $484mn in July (vs. a $753mn surplus in June).