Ukraine's currency reserves back up to $18.1bn, over three months of import cover 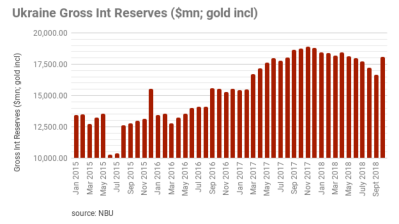 Ukraine's reserves are back above $18bn
By bne IntelliNews November 6, 2018

Ukraine’s gross international reserves (GIR) increased by 0.6% in October to $16.737bn as of November 1, according to the National Bank of Ukraine (NBU), and that is not including the recent Eurobond issue.

The result does not take into account the placement of a $2bn Eurobond by the ministry of finance on October 25, which came on the back of a new agreement with the country’s most important donor, the International Monetary Fund (IMF).

"Thanks to the funds from [the Eurobond] placement, as of November 5 Ukraine's international reserves rose to $18.069bn, which corresponds to three months of future imports," the NBU report said, referring to the minimum of reserves economists believe a country needs to guarantee the stability of the national currency.

The results will come as a welcome relief as the ministry has been struggling to meet some $3bn of debt redemptions that have been coming due as the year moves towards its close. The ministry has been tapping the domestic market with foreign currency denominated bond issues, but demand has dried up in recent weeks. And despite a new deal being agreed with the IMF, no money is expected from the multilateral lender until the end of this year or the start of next. As a result the ministry has been dipping into the GIR and the hryvnia has lost some 20% year to date.

The NBU has used October’s inflows of cash to replenish its reserves at the expense of the net purchase of currency in the interbank foreign exchange market, the NBU said, which was possible due to the absence of devaluation pressure on the hryvnia exchange rate, as well as the availability of excess currency supply, including through the receipt of currency earnings from grain exports.

The NBU bought out $268.5mn in the market in a month, including $126mn by choosing the best price from the matching feature and $142.4mn at a single exchange rate, and sold $70mn, all at a single rate. Thus, net purchase of currency in October amounted to $198.5mn, reports Interfax.