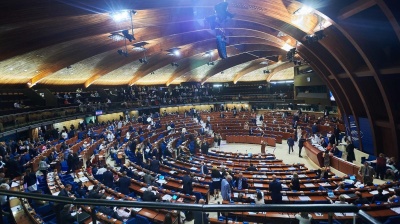 Russia was readmitted to the Council of Europe prompting Ukraine to leave
By bne IntelliNews June 26, 2019

The Ukrainian delegation to the Parliamentary Assembly of the Council of Europe (PACE) says it will suspend its participation in the European human rights organisation following the PACE decision to readmit the Russian delegation, which was suspended following the 2014 annexation of Crimea.

Kyiv will take part only in the sessions addressing sanctions on the Russian delegation, deputy speaker of the nation's parliament, the Verkhovna Rada, Oleksiy Honcharenko said in a televised interview on June 25.

Ukrainians are livid that Russia has been readmitted. Russia was suspended following the annexation of Crimea and for its support of the military action by separatists in the eastern Donbas regions. Nothing has changed since 2014, Ukraine argues, and readmitting Russia to PACE is tantamount to appeasement.

Russia has forced the issue as it has threatened to quit PACE completely if it was not readmitted. Membership of PACE comes with an obligation to respect human rights and for members to submit to the rulings of the European Court of Human Rights (ECHR).

The same day, Ukrainian President Volodymyr Zelenskiy expressed "disappointment" with the decision of the PACE "to approve without limitation" the rights of the Russian delegation.

"Last week I personally discussed this issue with the French President and the Federal Chancellor of Germany," he wrote on his official Facebook page on June 25. "I tried to convince [French President] Macron and Merkel that the return of the Russian delegation to the PACE is possible only after Russia meets the Assembly's fundamental requirements. It is a pity that our European partners did not hear us and acted in a different way."

Meanwhile, ex-Ukrainian President Petro Poroshenko said the same day that PACE's decision "is a powerful challenge to Ukraine". He pledged to use all his foreign relations "to treat the virus of forgiveness of Russia for the annexation of Crimea and the occupation of Donbas".

Poroshenko added that the resolution is the first serious diplomatic blow that Ukraine has received over the past five years, according to Interfax Ukraine.

Western European counties overwhelmingly voted to allow Russia back, whereas the opposition to Russia’s re-joining was mainly seen amongst the newer members of the EU and those lying on the Russian border.

Western European countries are afraid of losing what little leverage over Moscow the EU has thanks to Russia’s membership of PACE. Russia is the only member of the organisation that is not a EU or Nato member and as such PACE provides Europe with a forum in which to address Moscow over human rights issues and thanks to its treaty obligations for member, with some tools to hold Russia accountable. If Russia withdraws then even these modest tools would be lost and Russia would be able to act with impunity in Europe.

Few of the western European countries vote to reject the decison to readmit Russia to PACE, while Finnland, the Baltic states, Poland, Ukraine and Georgia all rejected the decision. 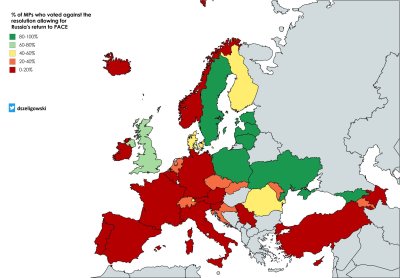 Preliminary results show clear victory for HDZ in Croatian general election
8 hours ago
NBU lionises Smolii, clarifies cancellation of Eurobond decision
1 day ago
Serbia declares state of emergency in Belgrade as coronavirus cases spike
1 day ago
No protests, but police continue to randomly arrest pedestrians on Belarus Independence Day
1 day ago
Governor Smolii’s departure from the NBU creates the risk of devaluation of the hyrvnia or default on its debt this year
2 days ago