Ukraine could be a "beacon about the power of capitalism", says Larry Fink, CEO of BlackRock 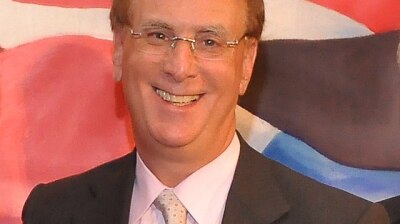 Ukraine’s lengthy and expensive reconstruction process could become a beacon to the rest of the world about the “power of capitalism,” said Larry Fink, CEO of investment company BlackRock, at the Ukrainian Breakfast discussion in Davos on January 19.

In a speech imbued with optimism about Ukraine’s potential, Flink described how BlackRock wants to help build a “better Ukraine”, not rebuild “the old Ukraine”. Following talks between Ukrainian President Volodymyr Zelenskiy and Fink last year, the investment company agreed to help the war-torn country with a Recovery Fund free of charge, in order to attract public and private investors.

“This is the time to construct a model in which we can assure the public sector who's going to be giving money (…) plus the attraction of private capital. The way we are going to have to be doing this is constructing a true foundation where we can identify the needs of the country,” Fink stated.

He mentioned that BlackRock is simply setting up the structure and the organisation process. The company will then help recruit Ukrainians who will navigate and manage the fund “and bring it to fruition”.

“We can create the proper KPIs and organisational structure, we will create the ability to create the monetary, where the money goes and how it is utilised,” Fink stated.

However, it is going to be expensive. Fink believes that if the war comes to an end soon, reconstruction costs will amount to $750bn. Nevertheless, he eagerly emphasised that investors will be keen to pump money into Ukraine.

“I do believe emotionally, those that truly believe in the capitalist system will be flooding Ukraine with capital,” he said. “It can be a beacon to the rest of the world about the power of capitalism.”

On the issue of Ukraine’s notorious oligarch problem, something which Western governments and institutions including the International Monetary Fund (IMF) have been keen for Kyiv to address, Fink stated: “We’re not going to be creating oligarchs but we are creating a new Ukraine.”

Instead of directing money into the pockets of Ukraine’s richest men, who control vast chunks of the country’s industry from metallurgy to media, Fink envisions capital entering the country and allowing everybody from the private sector to “make a fair and just return”. He believes that the reconstruction process can show the world that “oligarchs are not part of the future”.

Goldman Sachs CEO David Solomon expressed support for Fink’s plan. Also speaking at the meeting, he noted that Ukraine and its allies have to have a process for capital formation, although he stressed that this is “not an easy process”.

“It can’t happen without the public sector and public money partnering with private money. No question, there will be good economic incentives for real return and real investment, but as we’ve seen before in situations like this, there are a couple of things we need to be prepared to do. Financial institutions around the world have an obligation to participate and support,” he said.

Solomon emphasised that Ukraine will enter a transition period where raising capital will be a challenge. He said that private sector financial institutions with “big resources”, as well as governments, will have to lend and bridge the process as more information is gathered and the “roadmap” becomes clearer.

Turning to panellist Chrystia Freeland, the deputy Prime Minister of Canada, Solomon praised Canada’s “Sovereignty Bonds for Ukraine” initiative, which raised $500mn. Although not a vast amount of money in the grand scheme of things, the investment banker noted that it could be a very successful model if implemented worldwide, with Freeland mentioning that the initiative was easy to instigate.

However, Ukraine faces another major challenge: population decline. Prior to the full-scale invasion, the country was already suffering from one of the fastest depleting populations in Europe and the war has only escalated this decline, with one study from NoBrainerData estimating that the population could drop by either 24% or 33%.

With millions of Ukrainians seeking refuge abroad, particularly young women, the reconstruction process needs to attract back a chunk of the working age population. Bill Ford, CEO of the growth equity firm General Atlantic, believes that harnessing human capital and entrepreneurship, in addition to private capital, is important in rebuilding the country.

“We know about the tremendous engineering talent in Ukraine, many of whom have left the country to work in the technology sector globally,” he said.

“I think there's a chance to bring them home with capital and entrepreneurial support to build the industries of the future and the digital future, in addition to the green future, in Ukraine,” Ford added.

Agreeing with Ford, Ukrainian Vice Prime Minister Yulia Svyrydenko stated that Ukrainians need to return in order to “build back Ukraine better” and fight on the economic front. She stated that this would be possible if investors and governments start the process as soon as possible.

“That's why we need to start on the early stage during the war time and to make your contribution to victory now,” she told the forum.