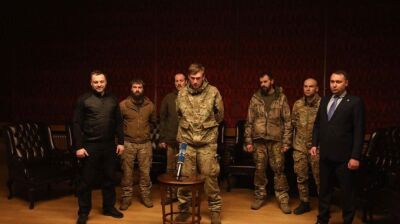 Ukrainian Azovstal fighters after their release under the prisoner swap agreement brokered by Turkey and Saudi Arabia. / bne IntelliNews
By Dominic Culverwell in Berlin September 23, 2022

Ukraine is celebrating as nearly 200 revered Azovstal soldiers were freed in the war’s largest prisoner swap on September 21. In exchange, Kyiv has given Moscow the Ukrainian oligarch and pro-Kremlin politician Viktor Medvedchuk, who was detained in April after escaping house arrest on treason charges, as well as 55 Russian POWs.

Ten foreign fighters were also exchanged, including the British soldiers Aiden Aslin and Shaun Pinner, who were sentenced to death in a show trial in Donetsk in June. The other prisoners were from Morocco, Croatia, the US and Sweden.

“They’re safe now. We remember and try to save everyone,” Ukrainian President Volodymyr Zelenskiy tweeted on September 22.

Intensive talks had been underway for a long time and were brokered by Turkey and Saudi Arabia, Reuters reported. Zelenskiy thanked Turkish President Recep Tayyip Erdoğan for his “leading role” in “liberating” the Ukrainian prisoners.

Five Azovstal commanders will remain in the custody of Turkey in “comfortable conditions” until the end of the war. The Azovstal defenders shot to fame due to their determination to keep fighting during the brutal siege of Mariupol whilst trapped in the Azovstal steel plant. The Red Cross and UN helped strike a deal with Russia to evacuate the troops to Russian-controlled territory once Mariupol fell. However, concerns for their safety arose after Russia said it would hold a “tribunal” over the POWs in May, with speculation they would be executed.

“Huge thanks to you and the entire team, to all people of Ukraine and people who took part in our return,” an emotional Major Serhii Volynsky said to Zelenskiy in a video call after being released.

“Aiden’s return brings to an end months of agonising uncertainty for Aiden’s loving family in Newark, who suffered every day of Aiden’s sham trial but never lost hope. As they are united as a family once more, they can finally be at peace,” Jenrick tweeted.

Looking dishevelled and underweight, Aslin and Pinner spoke with the press in Riyadh and thanked those that had helped them as well as the public for their support, with Pinner saying they had managed to make it out by “the skin of our teeth”.

The exchange has boosted Ukraine’s morale now that some of their most esteemed and respected fighters have been freed. The Azovstal defenders are seen as national heroes in Ukraine, with banners adorning Kyiv demanding their freedom. Zelenskiy even said “the whole nation has something to have a drink for tonight” after the news broke on Wednesday night.

Russia, however, has not seen the same celebrations. The high number of Ukrainians exchanged for such a small number of Russian POWs will likely be seen as a failure coinciding with the mass protests sweeping the country in response to the partial mobilisation.

Moreover, for ardent supporters of Russia’s invasion of Ukraine, the freeing of Azov soldiers will be seen as hugely undermining the Kremlin's “denazification” narrative, Belarusian journalist Tadeusz Giczan tweeted. Azov has been demonised in Russian media as being akin to the SS, with the state-media propagating stories about how they “kill Russian children of Donbas”.

“One of the main aims of denazification was the elimination of Azov, and the fall of Mariupol and their capture was the main triumph of the war to date. Their trial and execution were supposed to be the culmination of the "liberation" of Ukraine,” Giczan writes.

As such, the freedom of Azov troops, particularly in exchange for such a small number of Russian troops, will be seen as a betrayal, with the “denazification” line seemingly just a bluff. With this coming at the same time as Ukraine recapturing vast swathes of territory in the East, as well as the partial mobilisation, Russian President Vladimir Putin has made himself enemy number one of Russian nationalists. The consequences will no doubt be felt.

Medvedchuk, the Ukrainian MP and Putin ally, initially asked to be swapped for the Mariupol defenders in a recorded plea on April 18. The same day, Aslin and Pinner, who had been recently captured at the time, asked the then British Prime Minister Boris Johnson and Zelenskiy that they be exchanged for Medvedchuk in footage released by Russian state media. It is likely that they spoke under duress.

Zelenskiy's government had been ratcheting up the pressure on Medvedchuk for more than a year and accused him of leading a fifth column from the top of Ukrainian politics and acting as a proxy for Russia’s interests.  In February last year, the government imposed sanctions on Medvedchuk for “financing terrorism” and closed down three leading TV stations associated with him and his business partner, Taras Kozak.

At first, Moscow seemingly wanted nothing to do with him and Pinner’s sister mentioned that a swap was under discussion, although not necessarily with Medvedchuk. Kremlin spokesperson Dimitry Peskov even said: “Medvedchuk is not a Russian citizen and bears no relation to the special military operation”.

It is not clear why the Kremlin wants him now and Medvedchuk’s future in Russia is uncertain. Nevertheless, it reveals his importance to the Kremlin and suggests his pro-Kremlin position had significant influence in Ukraine.