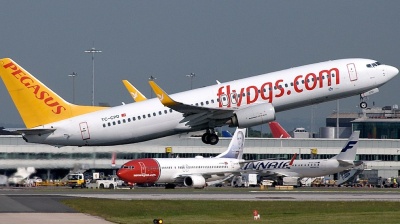 Turkey's low-cost Pegasus Airlines is also taking part in the ministries' bid to lower the tourism losses the country will suffer as a result of the Russia-Ukraine war. / Riik@mctr CC-BY-SA 2.0
By bne IntelIiNews April 11, 2022

Turkey’s transport and finance ministries are set to create an Antalya-based charter airline to exclusively transport Russian tourists to its Mediterranean and other resorts on a one-million seats per year basis, according to local reports.

The country’s flag carrier Turkish Airlines has, meanwhile, struck an agreement to fly 1.5mn Russian tourists into Turkey over the year, with seats reserved in “blocks”. And low-cost operator Pegasus Airlines, will across 2022 allocate up to 500,000 reserved seats for Russian holidaymakers.

Turkey, embroiled in an economic crisis that has lasted several years, fears it will this year face the added economic pain of losing millions of Russians and Ukrainians that will not be able to make it to the country for a holiday given consequences of the war in Ukraine. Though a Nato member with aspirations to join the EU, Turkey has refrained from imposing sanctions, including an airspace ban, on Russia in response to the conflict. It has instead taken the standpoint that as a country with vital economic relations with Russia and Ukraine and good political relations with both Moscow and Kyiv, it should attempt to play a peacemaking role. However, top Turkish officials have made it plain to Russian oligarchs they remain welcome to invest in Turkey—where they can still obtain “golden passports”—and the US Embassy in Ankara was last week moved to advise Turkey it should avoid becoming a pool of dirty Russian money.

"The escalation of the conflict between Russia and Ukraine has led to problems in the tourism sector in Turkey, as both markets have been very important for business," Turkish daily Sabah wrote, citing reports from Russia's Interfax news agency.

"Thanks to this airline, it will be possible to attract an additional million Russian tourists," it added.

Russians are the most frequent foreign visitors to Turkey. In 2021, almost 4.7mn Russian tourists visited the country despite the pandemic. Prior to the Russian invasion of Ukraine, Turkish authorities were forecasting around seven million Russian visitors over 2022.