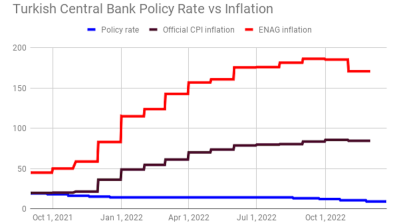 The October figure was the highest headline inflation rate recorded by Turkey since the 91% posted in June 1998.

At 84%, Turkey falls behind Argentina in the world inflation league. Argentina announced 88% for October. Turkey is now in seventh place in the ranking.

The Istanbul-based ENAG inflation research group, meanwhile, released a November inflation figure of 171% y/y, down from the 185% y/y it calculated for October. Polls have shown Turks generally don’t trust the official inflation data.

TUIK also gave an official figure of 136% y/y for producer price index (PPI) inflation in November, down from 158% in October. The October figure was a record.

The authority said it expected inflation to peak at below the 90%-level in November and to sharply fall in December due to the base effect that would be caused by the high inflation figure (14% m/m) reported for December 2021.

The guidance was based on the assumption that the Turkish lira (TRY) will not experience another crash. As of the afternoon of December 5, the USD/TRY was up 0.2% to 18.64 from 18.6 on October 27.

If the USD/TRY remains stable, Turkey’s official inflation figures look set to decline to the 30-40%s across 2023.

On November 24, the central bank’s monetary policy committee (MPC) cut its policy rate by another 150 bp to 9%.

The policy rate was now adequate and the rate-cutting cycle that started in August, bringing 500 bp of cuts in all, was at an end, the authority also said.

The turbulence-free mood on global markets continues. Turkey’s five-year credit default swaps (CDS) remain below the 600-level, while the yield on the Turkish government’s 10-year eurobonds remains below the 10% level.

M&A in Emerging Europe fell by 20% to €32.93bn in 2022
Council of Europe harshly criticises Estonian e-residency programme
Turkey’s regime working overtime to ensure no lira ‘freak show’ ahead of elections