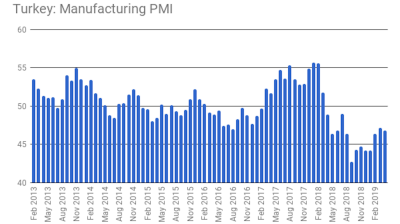 Turkey’s headline purchasing managers index (PMI) for manufacturing declined to 46.8 in April from 47.2 in March, signalling a further moderation in business conditions in the Turkish manufacturing sector, IHS Markit said on May 2.

“Last month’s fall in the lira and the associated tightening of financial conditions has weighed on activity and reinforces our view that even once the economy emerges from recession, any recovery will be slow-going,” Liam Peach of Capital Economics said on May 1 in a research note on the April PMI data release.

“The output prices balance rose for a fourth consecutive month. The most recent increase may reflect the post-election hike in electricity tariffs as well as the impact of a weaker currency feeding through into higher prices,” Peach added.

On April 1, IHS had identified “light at the end of the tunnel” for Turkey’s recession-hit manufacturing sector based on PMI data for March.

Also on April 1, James Swantson of Capital Economics said: “In Turkey, the [manufacturing PMI] survey [for March] adds to the evidence that the recession eased in Q1, although the recent financial market turmoil means that any recovery will be bumpy.”

Liam Carson, also of Capital, determined in a research note on the March PMI data that “[the] reading does offer a tentative sign that Turkey’s recession is starting to ease”.

“It looks like March’s industrial data will show a further improvement. The rise in the manufacturing PMI in recent months [to stand at 47.2 in March] is consistent with the year-on-year pace of contraction in industrial production easing further. Taking today’s figures together with retail data showing rising sales, it looks like the economy pulled out of recession in Q1,” William Jackson of Capital Economics said on April 16 in a research note entitled “Economy past the worst”.

Inflation data due May 3
Capital calculates that headline CPI inflation likely rose from 19.7% y/y in March to 21.0% y/y in April. The inflation data release is scheduled for May 3.

Fitch Ratings is also expected to release a Turkey review on May 3 after the market close. It currently rates Turkey at BB with a negative outlook.

Turkey’s PMI index for manufacturing has remained in contraction territory, below the 50-level, since April 2018.

The latest PMI survey data from the Istanbul Chamber of Industry and IHS Markit indicated that market conditions remained challenging for Turkish manufacturers in April, IHS also said on May 1.

New orders continued to moderate, leading to slower output and purchasing activity. The increase in input costs was the sharpest since October last year. In turn, the rate of output price inflation also quickened to a six-month high.

Destocking was signalled again in April as manufacturers responded to new order shortages. In fact, both pre- and post-production inventories were scaled back to greater extents than seen in the previous month. Despite a lack of demand for inputs, suppliers’ delivery times continued to lengthen amid reports of payment difficulties.

Demand shortages evident
“Demand shortages were again evident in the Turkish manufacturing sector in April, while currency weakness led to inflationary pressures building again. More positive was the labour market situation, with employment broadly stable amid signs that firms are looking to the future and working on new products in anticipation of an improvement in business conditions later in the year,” Andrew Harker of IHS Markit said.

It should be noted that Turkish private corporations have been subject to political pressure to avoid employee layoffs. That was especially the case prior to the March 31 local polls, but the pressure has actually been in evidence since 2017. It takes a brave Turkish corporation to sharply cut its workforce.

“Turkey? Do I need to go there. Anticipating the election board's decision over a possible rerun of the Istanbul ballot... the lira is heading through… its journey,” Julian Rimmer of Investec said on May 2 in an emailed note to investors.

“Notable perhaps that the Turkish side are putting it out that after the Trump-Erdogan call earlier this week that Erdogan extended, and Trump accepted, an invitation to visit Turkey. The Turks are talking about a visit in July—I guess by that time, the Russian S400s will be in place and able to protect Airforce 1 from any ‘in-comings’. Obviously the US side has not confirmed the visit… Just a thought, but given Trump loves bling, real estate and construction—actually, Erdogan I think could really impress/out-bling Trump with his presidential palace in Ankara. I finally realise why [Turkish Finance Minister and Erdogan son-in-law Berat] Albayrak and [Trump senior adviser and son-in-law Jared] Kushner seem to get on so well—as they both live/breathe real estate and construction, and bank credit has been part of this whole gig,” Timothy Ash of BlueBay Asset Management said in a note to investors.

“None the wiser”
“I read the communique from [Turkish central bank governor Murat] Cetinkaya [on April 30] and must confess to being none the wiser about Turkey's reserves position than I was before. I'm prepared to accept (I often use this shifty locution when faced with an unappealing prospect which I have no choice but to acknowledge) that he was correct when he discussed gross and net reserves, fx swaps, short-and long-term liabilities, commercial bank lenders and their export credits but in all honesty, it was too technical for me and I simply didn't understand… I'm also prepared to accept that everyone in the mkt understood the gobbledygook and it's just me that's stupid but I doubt retail investors fully comprehend what the CBT governor was explaining. It reminds me of Byron's line: ‘Explaining Metaphysics to the nation—I wish he would explain his explanation.’ The bottom line is that mkts were not reassured by his speech and lira sentiment remains, like the porcelain bauble..., extremely friable,” Rimmer said on May 1.

NBU lionises Smolii, clarifies cancellation of Eurobond decision
22 hours ago
No protests, but police continue to randomly arrest pedestrians on Belarus Independence Day
20 hours ago
Governor Smolii’s departure from the NBU creates the risk of devaluation of the hyrvnia or default on its debt this year
1 day ago
Croatia heads for hung parliament in July 5 election
1 day ago
Evidence of massive ballot stuffing emerges in Russia's referendum on constitutional changes
2 days ago