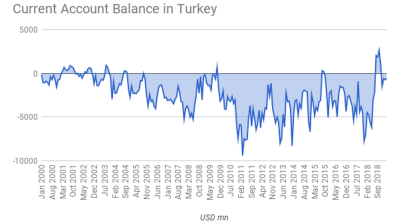 Turkey has posted a fourth straight monthly current account deficit but the year on year comparison again shows a big shrinkage in the gap given the major impact on import volumes of the Turkish lira crisis.

The country’s central bank announced on May 13 that in March the account was in negative territory to the tune of $589mn. However, that was a stark reduction on the deficit of $4.73bn seen in March 2018.

The March 2019 figure was lower than the figure anticipated by a May 10 Reuters poll of 16 economists, the median of which estimated a deficit of $984mn, with estimates ranging from $400mn to $1.2bn.

Turkey’s annual current account deficit is expected to stand at $13bn this year, according to the median produced by a separate Reuters poll of 11 economists. Estimates in that survey ranged between $5.3bn and $23.3bn. The median estimate in the previous Reuters poll for 2019 was $18.5bn.

The Institute of International Finance (IIF), on the other hand, forecasts that Turkey’s current account deficit will decline to $4.8bn in 2019 from $27.8bn in 2018. If that holds true, the recession-plagued country’s GDP contraction this year would exceed the current IIF forecast of 0.9% y/y.

Fitch Ratings forecasts weak domestic demand and a further improvement in services exports to underpin a current account deficit of 0.7% of GDP in 2019 (the smallest figure since 2002), amounting to less than projected net FDI inflows (1.2% of GDP).

“Nonetheless, the external financing requirement will remain large due to private sector debt repayments,” Fitch said on May 6 when it affirmed Turkey at BB/Negative.

The rating agency estimated Turkey’s total external financial requirement (including short-term debt) at $173bn in 2019, down from $212bn in 2018. “The financing requirement means Turkey will remain vulnerable to global investor sentiment and financial conditions, domestic political and economic policy uncertainty and a pronounced deterioration in relations with the US,” it said.

Capital Economics sees the country’s gross external financing requirement (the current account deficit and maturing external debt over the next 12 months) at about $190bn, Jason Tuvey of the economic research company said on May 13 in a research note entitled “A closer look at Turkey’s FX reserves”.

Wide gaps in forecasting show uncertainties
The wide gaps in the forecast ranges, which are not specific to current account estimates, show the impact of the current uncertainties as regards Turkey’s economic outlook.

The annual current account deficit shrank significantly last year, falling to $27.8bn from $47.35bn in 2017. The lira crisis that peaked in August caused a sudden stop in inflows via the country’s balance of payments.

Consequently, Turkey posted a cumulative current account surplus of $7.55bn for an interrupted four months from August to November. It fell into recession in the second half of the year.

Since December, the country’s cumulative current account deficit amounts to $3.45bn due to the limited recovery in economic activity financed by fiscal easing and lending by public banks in the run-up to the March 31 municipal elections.

In Q1, the cumulative deficit in the current account amounted to $1.94bn. That’s 88% y/y lower than the $16.2bn seen a year ago when GDP growth was still booming.

On May 3, the customs ministry released initial data on April’s foreign trade. The figures showed that the foreign trade deficit continued to contract, at a clip of 58% y/y in April to $2.83bn, while the January-April contraction was recorded at 69% y/y, producing a figure of $8.78bn.

Global news services last week released a series of reports on public lenders indulging in manipulative dollar sales to defend the lira, while on May 13 Reuters reported that Turkey's Treasury and Finance Ministry was contemplating whether to tap the central bank's legal reserve funds to borrow around TRY40bn, citing three unnamed officials. The government budget deficit is deeper than expected, the report cited the sources as saying.

The move would simply amount to boosting lira supply, or more frankly the old-style printing of money, at a time when public lenders are already selling USD to curb the depreciation of the local currency and the central bank is employing indirect tightening tools, once more scrapping one-week repo auctions and hiking reserve requirements.

Inconsistency and seeming chaos are bedevilling the Turkish government’s economic policies, but you could say that has been the case for quite a long while now with its policies on all fronts. The dosage of chaos continues to incrementally increase.

“President Recep Tayyip Erdogan's mishandling of his country's currency crisis heightens substantially the probability that Turkey will soon default on its external debt. That could jeopardise the rest of the emerging market economies' prospects as well as European banks, particularly in Spain, with high Turkish debt exposure,” Desmond Lachman wrote on May 14 in an op-ed for the Official Monetary and Financial Institutions Forum (OMFIF) entitled “Turkey headed for debt default”.

“Concerns about financial stability in Turkey and Argentina have resurfaced again in recent weeks but, while both countries face huge challenges, they are too small to pose a significant threat to the rest of the world economy,” Neil Shearing of Capital Economics opined on May 13 in a research note entitled “The changing face of EM debt risks”.