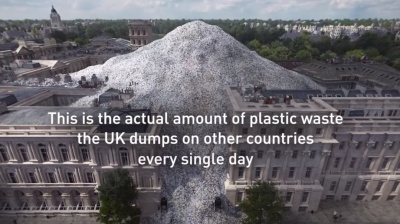 The trade publication noted: “When Turkey banned import of most plastics in May, it came as a huge surprise to the recycling industry, and caused a great deal of difficulty for recyclers both in Turkey and those abroad that relied on this crucial market.

“At that time, Turkey’s Ministry of Environment was driving the legislation that banned these imports even though it was the Ministry of Trade that executed the legislation. But it seems that Turkey’s Ministry of Trade has had a change of mind and has reversed the ban on 391510 recycled plastic imports. This suggests that attempts by the Turkish plastics recyclers to show the economic damage being caused by banning these imports has won out over the environmental considerations.”

Results of a Greenpeace investigation released in May revealed British waste (photo library) that was exported to Turkey for recycling was in fact dumped on beaches and roadsides or was burnt. The environmental organisation also released a powerful video, entitled “Wasteminster: A Downing Street disaster”, with the message: “The UK government claims to be a leader in tackling plastic pollution. But in reality, they’re sending their recycling to other countries where it’s often dumped and burned, causing serious health problems for local people, oceans and wildlife.”

MRW reported ahead of the ban on almost all plastic waste imports to Turkey that the move would leave UK exporters scrambling to find alternative outlets.

Simon Ellin, chief executive of the Recycling Association, was quoted as saying: “It basically bans imports of anything that includes ethylene, so apart from PVC [polyvinyl chloride] and PP [polypropylene] that is pretty much everything we export. Little goes to south-east Asia now and I have no idea where the waste that has been going to Turkey will go now.”