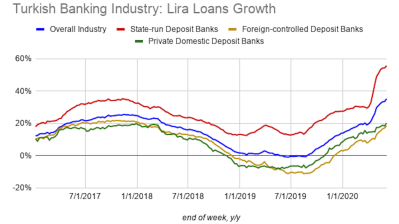 April saw 920,000 Turks take out their first ever bank loan, according to latest data from the Risk Center of the Turkish Banks Association (TBB). The figure includes those who borrowed to benefit from synthetically low rates brought in amid the coronavirus (COVID-19) crisis and went on to invest the loaned money in FX and gold.

Small and medium sized enterprises (SMEs) in Turkey have also been tapping local banks for credits to survive the crisis. They drew around Turkish lira (TRY) 96bn (€12.4bn) in loans from lenders in April.

The total loans amount granted by the country’s banking industry grew by TRY208bn from March to April, thus SMEs accounted for nearly 46% of the credit expansion.

Mortgage loan borrowing kept rising in May and June, with state banks launching a new package with lower rates as of June 1. Interventions created anomalies as usual and home prices boomed.

The average mortgage loan and commercial loan rates fell below 10% while the average consumer loan rate remained above 12% as of June 5. Official inflation stands at 11.4%, but realistically the inflation rate in Turkey is at least double that.

While lending has accelerated, some observers have warned that the government should be providing direct support to the economy rather than placing more people and companies in debt. However, the two-decade-old neoliberal policy in Turkey of pushing people into debt and, as a result, confining them to vote for an alleged stability, is still in play, complain critics.

A total of 32mn people were carrying bank debt as of end-April. More than 60mn people aged 18+, who are eligible to obtain bank debt, live in Turkey.

The nation’s overall official population stands towards 84mn, excluding immigrants, while there are officially at least 3.6mn Syrian immigrants in the country. Taking into account the number of unregistered immigrants, the immigrant total may well be over 10mn.

A rough calculation shows that the vast majority of people in the country might be said to be living under a form of financial bondage.

As of March, the 15+ population reached 62.2mn, up 1mn year on year, while employment sharply contracted by 1.67mn y/y to 30.1mn, according to the latest official data.

Only 22.5mn of 30.1mn actively worked in the month, down 4.5mn y/y, while 3.73mn people were ready to work if they found a job in addition to the official unemployment figure of 3.97mn people who actively searched for a job in the past few weeks.

Some 1.17mn people have lost hope of finding a job, up from half million a year ago.

As of June 13, 3.49mn people had received a TRY1,666 payment in compensation under a short-term employment allowance scheme while another 1.36mn had received TRY1,253 under unpaid leave or the "layoff ban", according to data from the trade minister.

The hunger threshold (minimum food expenditure for a four-person family) stood at TRY2,438 in May (TRY2,163 in December), according to a monthly survey by the yellow labour union Turk-Is.

The so-called layoff ban provides employers with the opportunity to send their employees on unpaid leave, with the government paying TRY1,253 in compensation. However, a figure of 102,000 new applications suggests that some firms preferred to pay the TRY2,943 punishment or claim that their employees had not complied with ethics. This is one of the all-too-familiar legal loopholes in Turkish law. This one allows the employer to fire employees despite the “layoff ban” if they do not act in line with some undefined ethical requirements.

As a result, the coronavirus outbreak caused the loss of at least 6mn jobs and ‘wide-scope unemployment’ passed 13mn, suggesting an unemployment rate of 39%, according to labor union DISK.

The official non-performing loans (NPL) data is far from reliable due to years-long regulatory forbearance when it comes to unrepaid debt. It shows that construction companies had the highest loan default rate, followed by tourism companies.

However, private lenders Garanti and Akbank fell below government-controlled Halkbank and Vakifbank as the private lenders have dragged their feet in joining the loan-boosting madness of recent years.

While the majority of the population are financially fettered, the minority who are not look for options to guard their savings against inflation tax.

Residents’ FX deposits broke a new record, increasing to $202bn as of June 5, or 49.3% of total deposits, from $200bn a week previously. Turks prefer the USD among hard currencies.

The number of Borsa Istanbul investors reached 1.56mn as of June 10 from 1.19mn at end-2019. Newcomers prefer small cap speculative stocks and, as a result, the share of BIST-30 companies, in other words the top 30 blue chips, in the overall transaction volume declined to the 40%s from the 80%s a year ago.