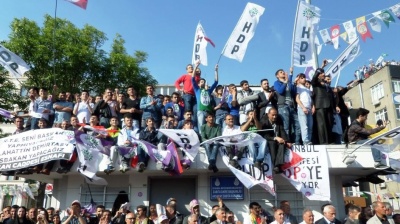 An HDP rally held prior to the first of Turkey's two general elections in 2015. / Salih Turan (VOA), public domain
By bne IntelIiNews January 6, 2023

The ruling was made on the basis that there is an ongoing case in which the court, the Constitutional Court, is hearing a bid from prosecutors to secure the closure of the HDP over alleged militant ties.

It came as Turkish President Recep Tayyip Erdogan dropped a heavy hint that the timing of Turkey's mid-2023 presidential and parliamentary elections will be brought forward from the scheduled date of June 18. "You all know the importance of 2023 elections whose date may be updated to be slightly earlier by taking into account the seasonal conditions," Erdogan said in a speech in Ankara on January 5, as reported by Reuters.

As things stand, the constitution bars Erdogan from seeking a third consecutive term as president in a scheduled contest, but if the date of the presidential poll is shifted, the election can be defined as a snap poll, clearing the way for him to fight for re-election.

The opinion polling available in Turkey is less than reliable but surveys taken in recent months indicate that in a fair contest Erdogan would lose to any one of a handful of opposition politicians who could be nominated as the opposition bloc’s challenger. Erdogan is widely blamed in Turkey for ‘boom-and-bust’ economic mismanagement that has led to the impoverishment of millions in the face of rampant inflation and a decimated Turkish lira. His authoritarian dismantling of human rights has also dismayed a great many Turks. How fair the election will turn out to be is the key question.

The Kurdish vote will almost certainly go heavily against Erdogan. Thus, freezing bank accounts of the HDP—the legal legitimacy of which was confirmed by a majority of eight to seven Constitutional Court members—and perhaps even closing down the party, over alleged ties to the outlawed Kurdistan Workers Party (PKK), designated as terrorist by Turkey, might be seen as attempts by officials to curb the Kurdish vote.

bne IntelliNews’ analysis is that in terms of how votes will likely be cast, closing down the HDP would make little sense as the Kurds in Turkey will be quite sure what to do at the ballot box if they want to stand the best chance of unseating Erdogan.

Rather, the moves against the HDP are probably designed to stir feelings against Turkey’s Kurds among Erdogan’s core vote and other potential Erdogan voters as Turkey’s autocrat attempts to secure as many votes as possible. Erdogan may then move on election night to declare a “victory” amid the usual situation in which analysts and opponents complain of a lack of transparency over how votes have been cast up and down the country.

Such complaints have not in the past led to any action. For instance, five years ago, when Erdogan declared he had triumphed in a constitutional referendum that made him “executive president” and defanged the parliament, one analyst concluded that voting patterns suggested that a group of hard-core anti-Erdogan voters seemed to disappear in the counting.

Observers of the run-up to the upcoming elections, meanwhile, await developments as to the fate of Ekrem Imamoglu, the opposition mayor of Istanbul, whom some Turkey watchers believe would stand the best chance of defeating Erdogan if he was nominated as the opposition challenger. That’s partly because of how his supporters are seen as highly organised when it comes to ensuring fair play at polling stations.

In mid-December, Imamoglu was sentenced to more than two-and-a-half years in prison for insulting public officials in a speech with the word “fools”. His conviction, if not overturned, would disqualify him from taking part in the presidential contest.

Kick Turkey out of Nato? Members will start considering it warns ex-commander