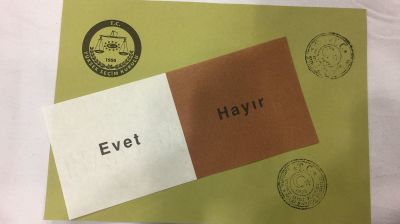 A group of voters who demonstrate hard-core opposition to Turkish President Recep Tayyip Erdogan and have never voted for his Justice and Development Party (AKP) in any election seemed to disappear when it came to the historic April 16 referendum that handed the president expanded powers.

Swedish assistant professor at the Stockholm Institute of Transition Economics (SITE), Erik Meyersson, released a blog post on April 18 entitled “The Curious Case of the Vanishing Never-AKPers in Southeastern Turkey”, with his preliminary look at voting patterns in last weekend’s poll. What he discovered is a group of voters that have always voted against Erdogan and the AKP, creating a “fat tail” in the distribution of votes – something which was entirely missing from the poll result. 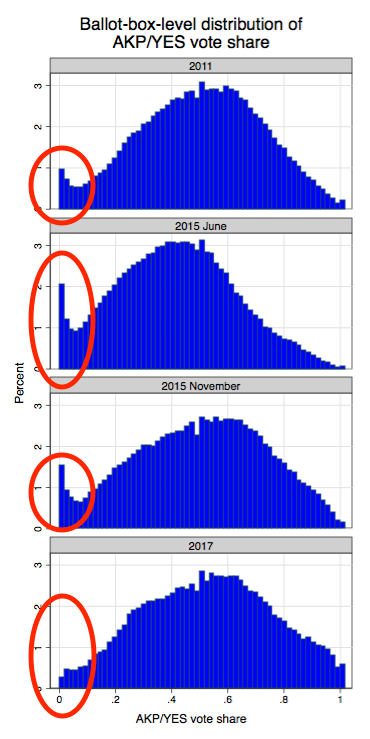 “At a first glance, when plotting the vote share distribution of the YES vote at the ballot box level [is the fact] that the 'Never-AKPers' were gone. These Never-AKPers are voting groups that have extremely few or literally zero votes for the AKP. In past elections, they have been quite noteworthy. The [chart] illustrates this by plotting the distribution of the AKP vote shares for the 2011, June 2015, and November 2015 parliamentary elections and in the bottommost graph the YES vote share in Sunday’s referendum,” Meyersson wrote in the blog post.

“Essentially, the fat left tail (ie. the ballot boxes with next to zero AKP votes), which stands out in the previous three elections, is almost entirely gone in 2017. What happened? Did the areas where the AKP was the least popular suddenly have a change of heart?” Meyersson concluded.

As bne IntelliNews reported at the time, Meyersson previously produced a detailed statistical study of the 2015 general election that concluded, “this analysis shows evidence that would be consistent with widespread voting manipulation”.

The result of that election came as a shock, as the AKP defied the almost universal polling consensus and won some 9 percentage points more than expected – just enough to rule alone, but not quite a constitutional majority. That victory lay the ground work for this week’s referendum to greatly increase Erdogan’s powers. The campaign period and vote itself have been criticised by international election observers as not sufficiently free and fair.

The OSCE issued a damning statement on the referendum that argued voters were not provided with impartial information about key aspects of the constitutional reform, and that civil society organisations were not able to participate. Moreover, it said the work of the electoral boards lacked transparency.

Meyersson’s blog is only a preliminary look at the voting patterns and he says it will be possibly months before academics can work through the details as the votes are still being collated.

“These Never-AKPers tend to be, with some exceptions of course, voters in the predominantly Kurdish southeastern region of Turkey. And so, in these areas, there ought to have been a vote swing from those previously voting for the [pro-Kurdish and left-leaning People's Democratic Party] HDP in past elections to a YES vote for the AKP government’s proposed constitution (which the HDP has stringently opposed) in the current election,” Meyersson wrote.

The results means that the AKP may have gained as many as 450,000 votes according to the preliminary results in the southeast compared to November 2015, equivalent to roughly 10% of the votes of the entire region, calculates Meyersson. That represents a big swing in the southeast towards the AKP in a region where the government is fighting a low-level war with the Kurds and has bombed and destroyed several towns and villages. Moreover, Meyersson estimates this large number of votes, amounting to approximately 1% of all the votes cast, came with a lower voter turnout, down by 150,000 in the region, according to his estimates.

These patterns are similar to the 2015 vote where the overall voting pattern was as predicted based on previous elections, except for the surprise defection of a large number of largely Kurdish voters in Kurdish areas to AKP. The ultra-nationalist Nationalist Movement Party (MHP) surprised observers by losing large numbers of votes to AKP. “The vote swing seems to be driven by voters in Kurdish provinces leaving the other main opposition party, the pro-Kurdish and left-leaning Peoples’ Democratic Party (HDP), for AKP,” Meyersson said in his report at the time.

Meyersson goes on to offer more statistics on vote swing dynamics that suggest “the largest pro-AKP swings appear to come from the least pro-AKP areas in the region”. In doing so, he uses data that plots the logarithm of the change in the pro-AKP vote swing against the logarithm of the change of the number of AKP votes in the past election for both the southeastern districts and the rest of Turkey. Indeed, this data shows that some of the biggest swings towards AKP were in those areas that were worst damaged by the government assaults on predominately Kurdish regions in recent fighting.

“The voters in the strongholds of the HDP, where sympathies for the PKK and antipathy toward the Turkish state are among the highest in the country, have truly chosen a peculiar time to switch to the AKP. What could possibly explain how such strongholds of the pro-Kurdish movement would have waited until 2017 to start voting for the AKP?” Meyersson adds.

Meyersson’s study is backed up by multiple videos on social media purportedly showing election officials stamping blank ballots to validate them and other footage of ballot box stuffing in regional polling stations. This is accompanied by multiple reports of election procedural violations in polling stations across the country which were entirely under the control of AKP officials. Turkey’s main opposition party, the Republican People's Party (CHP), has said it will challenge the results and demand a recount of up to 60% of votes due to alleged irregularities.