Thousands of Russian troops to remain in Belarus 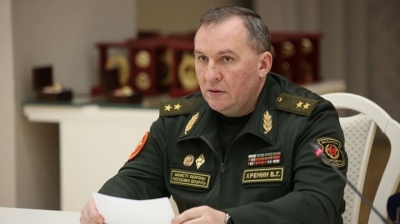 Today, Belarus’ Defence Minister Viktor Khrenin announced that Russian troops will stay in Belarus due to increased military activity along the Belarusian border and the aggravated situation in Donbas.

During a press conference, Khrenin hailed the joint Russian-Belarusian Allied Resolve military exercises held in Belarus this month as a success. The exercises were announced by Belarus’ strongman Alexander Lukashenko in January and were said to enact a specific “action plan” against military threats from Ukraine, Poland and the Baltic States. According to Russian and Belarusian official statements, the exercises were being held as an “inspection” of the joint forces of Russia’s and Belarus’ “Union State”.

Russian and Belarusian troops have, however, been largely concentrated along Belarus’ southern border with Ukraine, they have been held during a time when Russia is heavily increasing its military presence all around Ukraine, in what Western officials call a preparation for an invasion. Khrenin’s statement confirms the fears of the Baltic countries, Poland and Ukraine: that Russia will create a strong and permanent military presence in Belarus, with a large number of Russian troops and advanced Russian military hardware being placed around the country.

The Russian-Belarusian Union State’s two joint military components are the Regional Group of Forces (RGF) and the Unified Regional Air-Defence System (URADS). While the former is only to be organised in the threat of war, the latter exists and functions in peacetime and could be called compensation for Belarus’ non-existent air defence capability.

One of the main features of Allied Resolve seems to have been a strengthening of Belarus air defence capabilities, with the modern S-400 “Triumf” surface-to-air missile systems, Pantsir-S1 missile systems and several Russian fighter jets being deployed to Belarus. In relation to a possible military conflict with Ukraine, this would assure Belarus' offensive and defence capabilities against Ukrainian UAV or missile responses.

Russia has for many years refused to supply Belarus with modern weapon systems, including air defence systems and aircraft. This has kept the Belarusian air defence system weak, and its ground forces have been left without air support, which has helped Moscow to keep Minsk's military capability in check.

Now, this policy seems to have changed. As the Belarusian regime is made more and more economically and politically dependent on Russia, Moscow is also making sure that it forces Minsk to accept a strong Russian military presence in the country; Belarus hasn’t simply been given new military hardware but has had it placed on its territory, accompanied by Russian troops. Khrenin told the press that “The Allied Resolve 2022 exercise provided us with a unique opportunity to create an aviation and air defence group equipped with the most modern weapons systems,” hinting that the strengthening of the URADS is here to stay.

Moreover, there’s a possibility of Minsk deciding to deploy more Russian S-400 systems near Minsk. During a visit to a military training ground this week, Lukashenko noted: "We may deploy them somewhere east of Minsk or near Minsk and we will keep an eye on what is going on in Kiev, beyond Warsaw and so on."

Although Russia doesn’t have a permanent military base in Belarus it has now achieved a de facto permanent presence in the country, legitimised through both Belarusian and Russian statements of increased military threats from the West. This will be accompanied by more joint exercises planned this year and a new joint military training facility in Belarus.

During his press conference, Khrenin added that interoperability had been increased between Russia's and Belarus’ armies, on the tactical level the performance of tasks by pilots and tank crews from both countries had become coherent, and that “regardless of nationality, the military authorities of all associations worked as an integral ‘organism’.”

It’s important to note the significance of the latest update of the Union State military doctrine signed in November last year. The doctrine stipulates that during a “period of growing military threat”, Minsk and Moscow will co-ordinate how to deploy their regional grouping of forces RGV (S), i.e. the Union State's joint forces. The activation of the RGV (S) are only done in case of a threat, with its purpose being to “repel an attack, defeat the aggressor and create the prerequisites for the cessation of hostilities on conditions that meet the interests of the participating states.” Here one calls to mind the explanation for the Allied Resolve exercises, which are said to be purely defensive and “an inspection” of the Union State’s troops’ readiness in case of an attack.

The “period of growing military threat” comes prior to the second stage, defined as the “initial period of war”. Signs of the Union State entering a period of growing military threat are therefore strong indicators of impending hostilities. The recently increased high-level meetings, increased interoperability and joint exercises between Russia’s and Belarus’ military forces certainly makes it seem as if Moscow and Minsk believe they’ve entered the first period.

Lithuanian Lt. Gen. Valdemaras Rupsys, Lithuania’s defence chief, noted that while “previously, only air defences and air surveillance systems were integrated, and now we observe a systemic integration and subordination of Belarusian forces to Russia.” Today, Rupsys does not believe that it’s possible to make a distinction between the Russian and Belarusian forces. However, in Rupsys opinion it wouldn’t matter if the Russian troops stayed or not, since “the Belarusian armed forces from now on are subordinated directly to the Russian military’s supreme command.”

The referendum contains a vote that would make it constitutionally legal for Belarus to host Russian nuclear weapons. French President Emanuel Macron raised this question with Putin during their meeting in Moscow earlier in February and received assurances from Putin. Shortly afterwards, Putin announced strategic nuclear weapons exercises; he was joined by Lukashenko in the command center to watch the exercises.

During his visit to the Osipovichi military training ground 17 February, Lukashenko stated that in case of a threat from the West, "not only nuclear but even more advanced weapons will be deployed in Belarus to protect our territory.” French Foreign Minister Jean-Yves Le Drian told the press this week that if Russia deployed nuclear weapons to Belarus, “this would be a serious change in European security, which cannot go unanswered.”

Is Russia putting additional pressure on Belarus to join the war?
Belarus Corruption Watch: living the high life with Dimitry and Anna Lukashenko
Belarus’ government to expand political-economic control at the expense of economic growth