What’s behind the military build-up in Belarus? 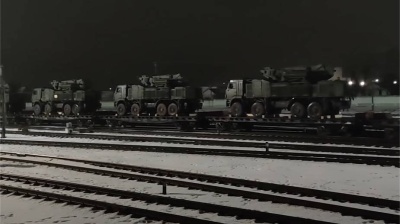 The picture is a screenshot from a recent video published by the Russian Ministry of Defence of Russian Pantsir-S1 missile defence systems being transported for deployment in Belarus. / Picture from armyrecognition.com
By bne IntelliNews February 1, 2022

Last week, Russia continued supplying large amounts of military hardware to Belarus and the Russian Ministry of Defence published a video showing several Pantsir-S1 air defence missiles systems arriving in Belarus. This short/medium-range air defence system is one of the more efficient ones in the world. The Pantsir-S1 systems are supposed to be stationed on various airfields in southeastern or western/northwestern Belarus, close to the borders of Ukraine, Poland and Lithuania.

The Belarusian Ministry of Defence has managed to keep a cool head in its external communication. Belarus’ Chief of the General Staff of the Armed Forces and First Deputy Minister of Defence, Major-General Viktor Gulevich, said in a briefing for foreign defence attaches that the Belarusian-Russian Allied Resolve military exercises “pose no threat either to the European community as a whole or to neighbouring countries in particular”. Earlier last week, Belarus’ defence ministry also said that the Russian forces would leave Belarusian territory once the exercises were over.

During a big speech last Friday, Lukashenko made some comments that deviated from his defence minister’s soothing attempt at public relations. According to Lukashenko, “the established system of the world order is actually a thing of the past”; today, nuclear powers were instead trying to broker new agreements since they’re building up for a World War 3.

Lukashenko said that since the West, on its part, is trying to destabilise the post-Soviet region, Belarus has been forced to build up its defensive capabilities. According to him, nobody would be a winner in this hypothetical war. Moreover, he said that Belarus and Russia would return Ukraine to the Slavs, adding: "We will definitely do it.” However, Belarus would only engage in a war for two reasons:

In the second case, Lukashenko said that “Belarus will help defend Russia within the framework of the allied agreements”, i.e. within the framework of the Union State. The aim of the current exercises is said to be just that: an “inspection” of the Union State’s defences. He added that assuring the strength of the military defences in the direction of Ukraine was the most important.

An interesting part of the Allied Resolve exercise is that it has been said to practise “shutting down channels of the supply of arms, munitions and other means and also searching for, blocking and eliminating outlawed armed militants and enemy subversive and reconnaissance groups. The exercise will also highlight certain issues of post-conflict settlement.”

Such practice is generally aimed at working with the population in order to ensure a secure formation of a new government and eliminating the remnants of an enemy resistance. If Ukraine was attacked from Belarusian territory and replied with missile strikes, UAVs and/or behind-the line sabotage groups – Belarus would be well prepared.

Despite its fear of Nato, Russia has for many years refused to supply Belarus with modern weapon systems, including air-defence systems and aircraft. This has kept the Belarusian air-defence system weak and its ground forces have been left without air support. This policy has helped Moscow to keep Minsk's military capability in check regarding Russia.

The main feature of the Allied Resolve exercises seems to be a large build-up of Russian air-defence forces in Belarus: the arrival of two divisions of the S-400 missile defence system, Su-35 fighters and last week, Pantsir-S1. Already in September last year, Lukashenko said that Belarus would buy the S-400 system from Russia, but whether the S-400 missile defence systems will remain at the border with Ukraine until after the exercises remains to be seen.

Today, the Union State’s two military components are the Regional Group of Forces (RGF) and the Unified Regional Air-Defence System (URADS). While the former is only to be organised in the threat of war, the latter exists and functions in peacetime and could be called compensation for Belarus’ non-existent air defence capability.

The military build-up in Belarus today could be a result of the new defensive agreements hammered out between Belarus and Russia last year, which could mean a strengthening of the URADS. However, in general it does seem as if Russia has created a situation where it can keep a de-facto permanent military presence in Belarus, legitimised through both Belarusian and Russian statements of increased military threats from the West.

An internal and external political aim

Russia may want the Allied Resolve exercises in order to put pressure on Ukraine, and while Belarus certainly doesn’t need a war with Ukraine, it has no problems with scaring Ukraine a little, since it suits Minsk’s domestic political purposes.

As bne Intellinews reported earlier, the Belarusian referendum is coming up in February, just as the Allied Resolve exercises will have ended. Some people have claimed that the Russian military presence will be a stabilising factor during the referendum. This is unlikely, since the Belarusian regime’s own repressions have effectively put an end to any public manifestation of resistance and since the exiled opposition hasn’t announced any plans on staging protests.

More likely is that Russia’s plans for putting pressure on Ukraine simply have come at a good time for Lukashenko. His speech last Friday, January 28 was probably meant to reflect the regime’s stability and control over the country, but no promises of developing the country were made; instead he only declared the need for a continued struggle against internal and external enemies.

The sharply increased war rhetoric from Lukashenko and the Russian military deployment in Belarus is most likely Minsk's intensification of an old tactic:

The regime needs it to shift the focus away from political repressions, to legitimise increased spending on security forces (including the military) and to seem as if it is protecting the population from a great war – where the domestic enemies and instigators of this war are the opposition. The Belarusian regime is also playing out its main geopolitical bargaining chip with Russia, namely Belarus military strategic importance. By (almost) playing out this card fully, Minsk probably hopes to receive much needed political and economic support from Moscow, at least for the remainder of this year.

NEO: Rising in the East, Setting in the West: Russia strengthens trade with Global East
16 hours ago
Stagflation fears continue to rise
22 hours ago
The economics of herding in Mongolia
2 days ago
EXPLAINER: how a price cap on Russian oil might work
2 days ago
Russia catches a nasty dose of the Dutch Disease
2 days ago