The UN calls for Russia to pay reparations for Ukraine attack 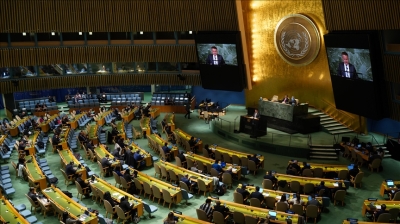 94 countries from a total of 193 voted on a UN General Assembly motion for Russia to pay reparations for its attack on Ukraine / bne IntelliNews
By bne IntelliNews November 15, 2022

The United Nations General Assembly (UNGA) voted to hold Russia responsible for its attack on Ukraine and set up a mechanism to record the damage done so that the value of reparations can be calculated and eventually imposed on November 14.

The resolution was supported by 94 of the assembly's 193 members, with 14 voting against and 73 abstaining – the most abstentions from any of the five UN votes concerning Russia’s war with Ukraine since it began on February 24.

While the majority voted for the motion to condemn Russia, the voting followed a similar pattern to previous votes, with many of Russia’s allies preferring to abstain from the vote. China and India, which are major trade partners, voted to abstain and have abstained from all the UN votes concerning the war. Many non-aligned countries from the Global South are seeking to retain good relations with Russia, which is a major supplier of commodities, energy, nuclear power technology and food.

The non-binding resolution said that Russia "must bear the legal consequences of all of its internationally wrongful acts, including making reparation for the injury, including any damage, caused by such acts."

The UN called for the establishment of an international run register to record evidence and claims against Russia.

Ukrainian President Volodymyr Zelenskiy has been demanding reparations and has included a discussion of them as a condition for any peace talks with Russia. At an earlier conference in July Ukraine’s government valued the damage to the Ukrainian economy, include the lost opportunity cost, at $750bn. Other studies have put just the physical damage to housing and infrastructure at $180bn and rising.

"The reparations that Russia will have to pay for what it has done are now part of the international legal reality," Zelenskiy said in his nightly video address.

Kyiv's Ambassador to the UN Sergiy Kyslytsya told the General Assembly before the vote that Russia has “tried to destroy Ukraine – in a very literal sense,” and targeted everything from factories to residential buildings and hospitals.

He also cited accounts of atrocities committed by Russians in territory it occupied, including murder, rape, torture, forced deportations and looting, including the massacre at Bucha in April.

“Ukraine will have the daunting task of rebuilding the country and recovering from this war,” Kyslytsya said. “But that recovery will never be complete without a sense of justice for the victims of the Russian war… It is time to hold Russia accountable.”

Russia's UN Ambassador Vassily Nebenzia told the General Assembly before the vote that the provisions of the resolution are "legally null and that the resolution was, “an attempt to legalise something that from the view of existing international law cannot be legalised.” He urged countries to vote against it.

"The West is trying to draw out and worsen the conflict and plans to use Russian money for it," Nebenzia said, as cited by Reuters.

Nebenzia accused the West of “doing everything it can to provide a veneer of legitimacy” to start spending frozen – or actually “stolen Russian assets amounting to billions of dollars.” The West froze some $300bn of Central Bank of Russia (CBR) reserves at the outset of the war, which many have said should be used as reparations for Ukraine. However, for the West to seize Russia’s assets legally it would have to first declare war on Russia, something the West is adamant it won’t do.

Sixteen countries that support Russia, including Palestine,  made this point in a joint statement saying the resolution didn’t have “sufficient legal basis” for them to support it. Amongst the other countries that signed the statement were China, Iran, Angola and Venezuela, the Washington Post reported, saying they had suffered from “foreign interference, colonialism, slavery, oppression, unilateral sanctions and other internationally wrongful acts, also deserve the right for remedy, reparation and justice, which should be addressed through sound legal processes.”

"It will take a broad international effort to support Ukraine's recovery and reconstruction in order to build a safe and prosperous future for the Ukrainian people," Britain's UN Ambassador Barbara Woodward told the assembly. "But only one country, Russia, is responsible for the damage to Ukraine, and it is absolutely right, as this resolution sets out, that Russia pay for that damage."

The resolution was sponsored by Canada, Guatemala, Netherlands and Ukraine and co-sponsored by dozens of others. The resolution highlights Article 14 of the UN Charter that authorizes the General Assembly to “recommend measures for the peaceful adjustment of any situation … which it deems likely to impair the general welfare of friendly relations among nations” including violations of the Charter. 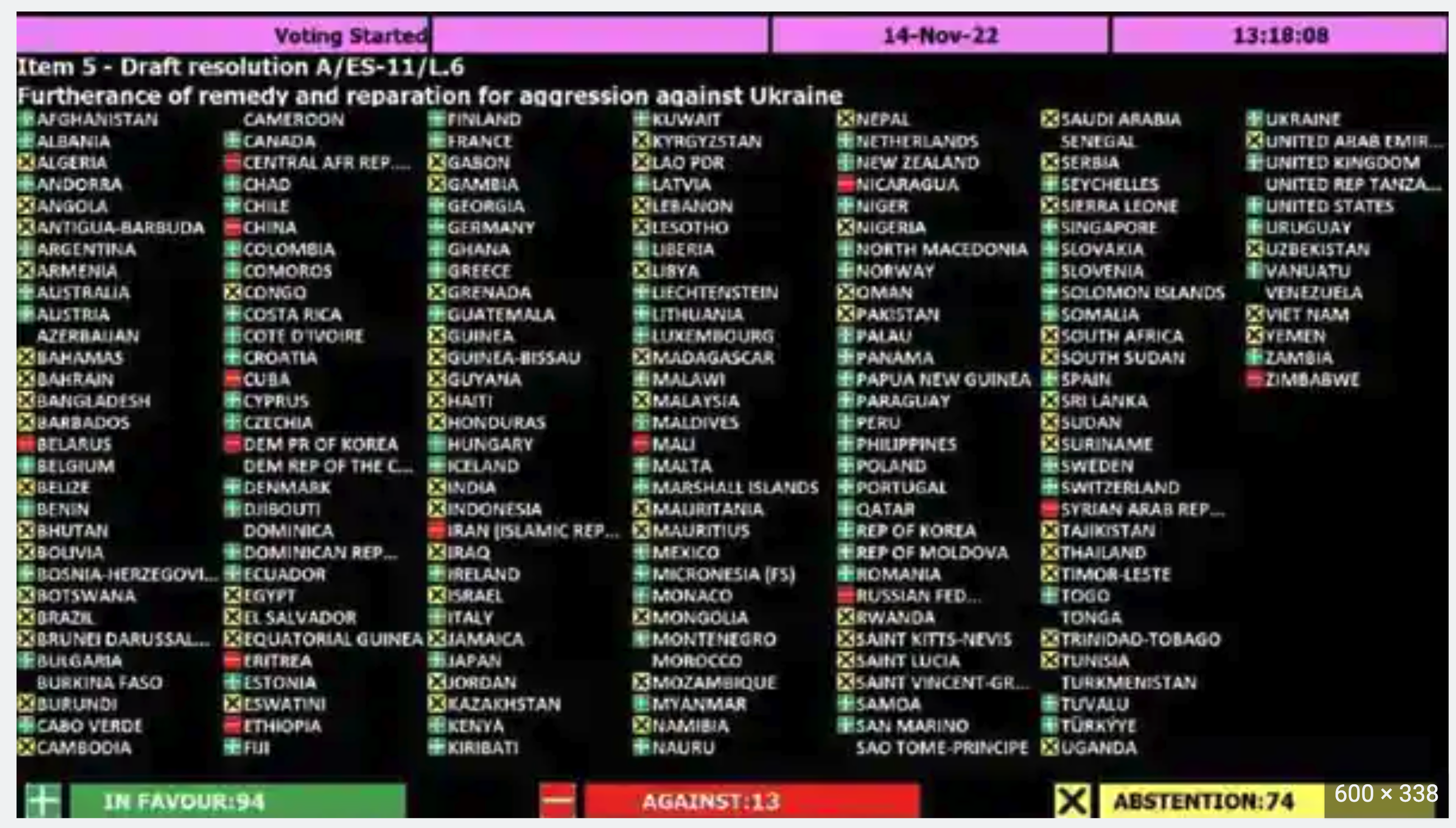