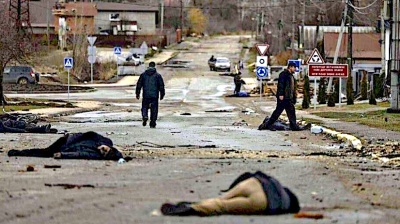 Horrifying images emerged over the weekend of streets strewn with bodies accompanied by reports of summary executions and the systematic rape of women in Bucha, a suburb of Kyiv that was retaken by the Ukrainian army as the Russian forces retreated.

Video footage widely shared on social media shows armoured vehicles driving through a ruined landscape, weaving between the corpses lying on the road. In some cases the victims appeared to have had their hands bound behind their back. In another one man appears to have been shot while riding his bicycle and fell in the road still astride the bike. 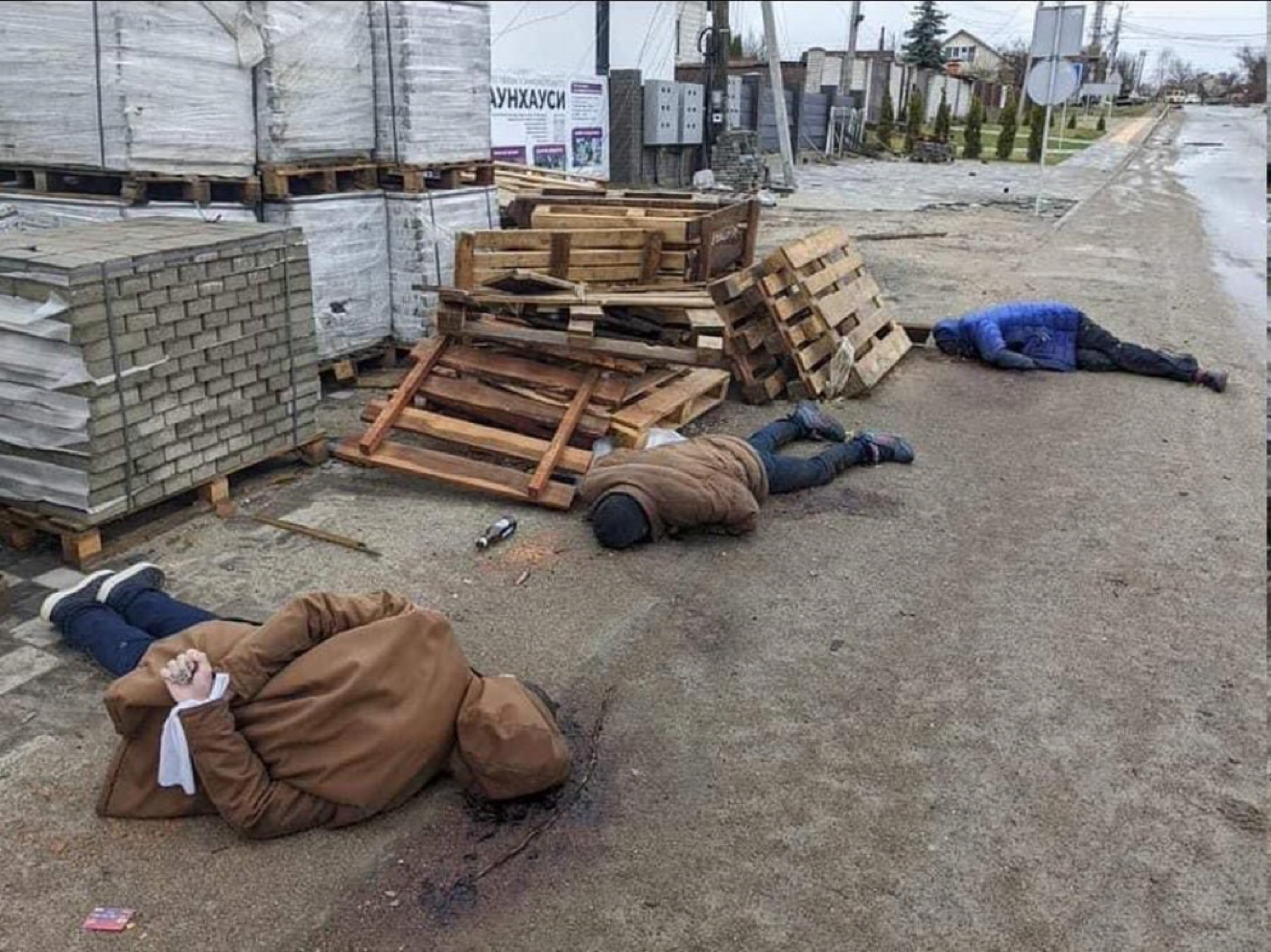 “We found 18 bodies in [a house in Bucha]. They had been torturing people. Some of them had their ears cut off. Others had teeth pulled out. There were kids like 14, 16 years old, some adults. They just took the bodies away yesterday,” The Sunday Times reported citing Ukrainian army reports.

According to reports all men between the ages of 16 and 60 that the Russians forces could find were summarily executed. A total of 500 people were killed, according to the initial reports.

Another image reportedly showed five naked women piled up, having been covered with a blanket by the advancing Ukrainian forces. Human Rights Watch has already reported many incidents of war crimes and confirmed accounts of local women being raped multiple times by the retreating Russian forces.

“Rape is a weapon of war. Though we don’t yet know the full extent of its use in Ukraine, it’s already clear it was part of the Russian arsenal. Women raped in front of their kids, girls in front of their families, as a deliberate act of subjugation. Rape is a war crime,” tweeted British Ambassador to Ukraine Melinda Simmons.

The outcry after the images were released was immediate and loud. Latvia immediately announced it would halt all Russian gas imports immediately and calls for the rest of Europe, especially Germany, to end Russian energy imports as well quickly followed. 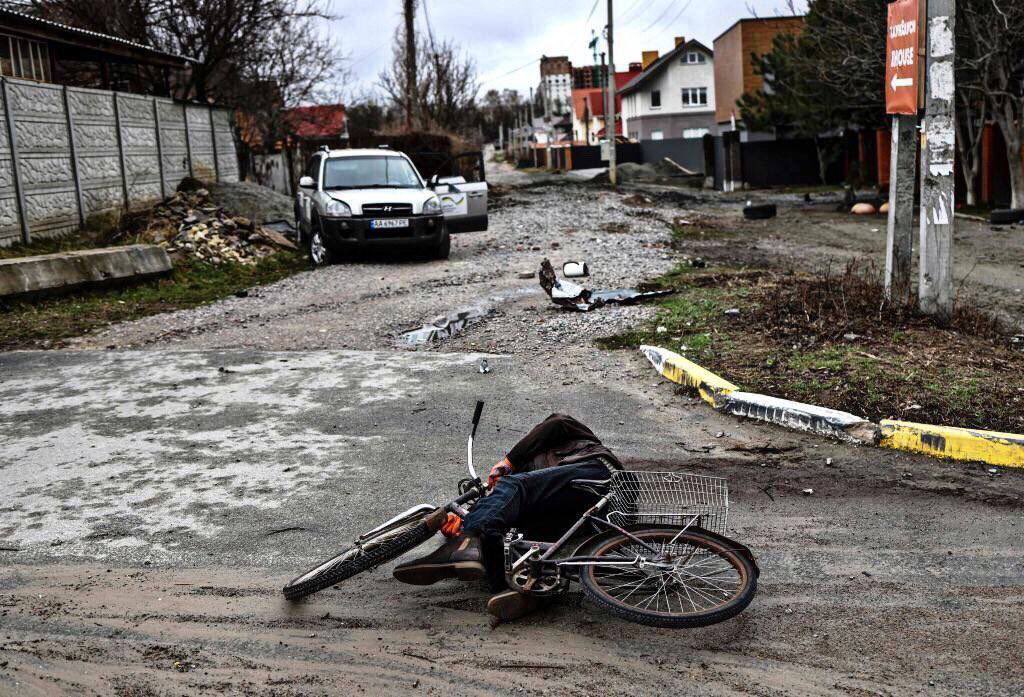 “The Bucha massacre was deliberate. Russians aim to eliminate as many Ukrainians as they can. We must stop them and kick them out. I demand new devastating G7 sanctions NOW:

– Close all ports to Russian vessels and goods

The pressure on the EU to hit back as hard as possible will be intense going forward. Banning Russian energy imports, especially of gas, is high on the list in the effort to cut off the flow of money back to the Kremlin that is mitigating the pain of the current sanctions regime. Russia earned some $120bn from oil exports to Europe and $145bn from gas exports in 2021, according Institute of International Finance (IIF) estimates.

Latvia has already announced that it will end Russian gas imports immediately. The head of Latvia's natural gas storage operator said on April 2 that the Baltic states were no longer importing Russian natural gas.

"If there were still any doubts about whether there may be any trust in deliveries from Russia, current events clearly show us that there is no more trust," said Uldis Bariss, CEO of Conexus Baltic Grid, as cited by channelnewsasia.com. "Since April 1 Russian natural gas is no longer flowing to Latvia, Estonia and Lithuania," he told Latvian radio. He added that the Baltic market was currently being served by gas reserves stored underground in Latvia.

The SWIFT sanctions may be extended too, which have already hampered Russia’s access to the international payments system. Immediately following Russia’s attack on Ukraine on February 24 Russia’s two biggest banks, Sber (formerly known as Sberbank) and VTB Bank, were removed from the SWIFT messaging system; however, only seven Russian banks in total have been banned from the 374 banks operating in the country. Gazprombank in particular has been excluded, as it is the main payment agent for European gas bill payments, and a rubles-only-for-gas scheme being pushed by the Kremlin is designed to make it impossible to sanction Gazprombank or freeze the gas revenues it receives.

Many observers pointed out that the Bucha massacre is reminiscent of the zachistki, or “clean up” operations, used in Russia’s Chechen wars. There, Russian troops indiscriminately killed civilian survivors as they advanced on towns and villages that had already been reduced to rubble by heavy shelling.

“Horrifying video footage of rocket attacks on residential neighbourhoods in Kharkiv and other towns cannot but remind of the pitiless destruction of Grozny in 1995 and 1999, which left the Chechen city almost obliterated,” tweeted Tom Parfitt, The Times’ veteran Russian correspondent. “That kind of shocking cruelty followed a vilification campaign in Russian media against Chechens, who were portrayed as sub-human savages (although there were very brave and tenacious Russian reporters and rights activists who fought that narrative vocally).”

The Bucha killings take the Ukraine war to a new level of animosity, fuelled by what appears to be very effective Kremlin propaganda that has poisoned the minds of average Russians against Ukrainians. Until now the difference between the Chechen campaigns and the current war in Ukraine has been that, despite the constant rhetoric about "denazification", Russian troops on the ground are faced with an “enemy” population that is not fundamentally “other” to them, points out Parfitt.

“A provincial Russian soldier advancing through Ukraine sees babushkas who look distressingly and morale-sappingly similar to his own,” says Parfitt. “For many Russians, Ukraine is not a faraway place occupied by (in the imagination, at least) head-choppers and primitives. It’s somewhere where you have childhood friends, or family.”

That hesitancy seems to have faded as the local Ukrainians have been demonised in the minds of the soldiers to the point where they can inflict savage violence on innocent civilians.

“[There is] unbelievable bestiality in Bucha and elsewhere. The worst has come to pass and we are seeing the same savagery once inflicted against civilians in Chechnya – this time, against a people who Putin claims are one nation with the Russians,” Parfitt concluded in a thread on twitter.

The Russian state-controlled media seems to have run an extremely effective propaganda campaign to persuade regular Russians that Ukraine is their enemy and poses an existential threat to Russia.

A recent poll by independent pollster the Levada Center found that Putin’s personal popularity had risen to 83%, its highest level in five years and on a par with levels following the annexation of  Crimea.

The massacre comes in the context of some progress in the peace talks between Russia and Ukraine. A major step forward was made at peace talks in Istanbul on March 29 when the Ukrainian side conceded to a ten-point list of peace proposals, including giving up its aspirations to join Nato, but little progress was made during the rest of the week.