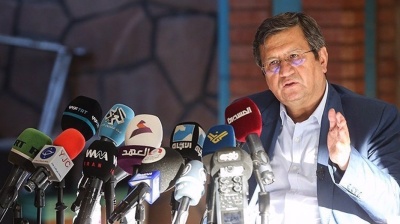 Abdolnaser Hemmati will have his work cut out persuading enough moderates and reformists to vote given the dismay at the barring of leading candidates from the presidential race. / Tasnim news agency.
By bne IntelIiNews June 5, 2021

Unless there’s a last minute change of heart from the powers that be in Iran, the leading moderates who planned to mount challenges for the presidency in the upcoming June 18 election will remain excluded from the race. That will leave those Iranians who still plan to place a vote in the contest for somebody other than a religious  hardliner searching for an acceptable candidate.

One outsider who earned a surprising amount of attention and airtime in the past week is Abdolnaser Hemmati—an economist and politician who has run the Central Bank of Iran (CBI) for the past three years—who appears to be in the midst of an eyecatching and rapid transformation from dull banking technocrat to Iranian champion of free speech.

Hemmati this week scored a public relations win with the more liberal-minded constituencies in Iran when his wife Sepideh Shabestari appeared in an interview on state television espousing her capable husband while not wearing the obligatory chador expected of potential first ladies (see social media post below). 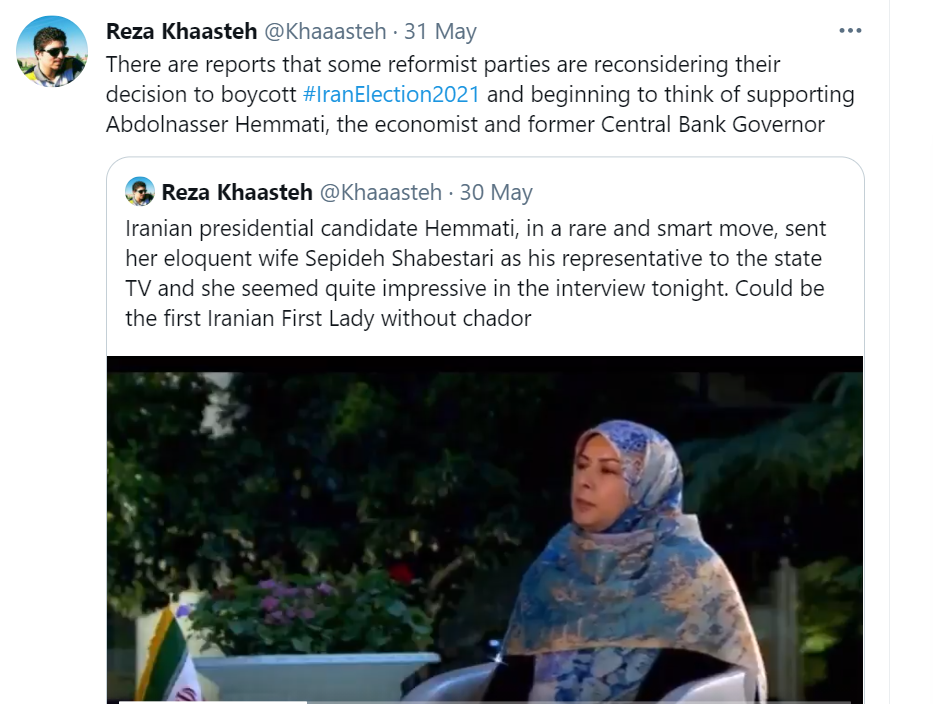 The seemingly innocuous move caused some waves in Iranian society, with many people taking notice of the low-profile moderate candidate for the first time. And for those looking to Hemmati to further disrupt the hardliners’ seemingly little-hindered path towards taking the 13th presidency, they didn’t have long to wait.

On June 1, Hemmati—who was dismissed from his central bank post when his presidential candidacy was confirmed given possible conflicts of interest—was expected to present the first of several election broadcasts that he is entitled to air on state TV, but his submission was blocked by Islamic Republic of Iran Broadcasting (IRIB) for “being late”.

Hemmati, who turns 65 next week, was quick to take to social media to blast the broadcaster for blocking his campaign material. As it happens, Hemmati was deputy head of the TV station in the early 1990s. Critics wondered at how even his previous pull with IRIB was not enough to shift what they took as a censorship barrier.

Hemmati was previously a member of Iran’s “modern right” and “reformist-centrist” party Kargozaran (Executives of Construction Party). The party was seen as close to former president and pragmatic Islamic conservative Akbar Hashemi Rafsanjani—Rafsanjani, who died in 2017, was president between 1989 and 1997, supporting a capitalist free market approach to the economy—and Hemmati’s long-time connection with the Rafsanjani family could help the banker make his way into the public consciousness of those Iranians who remember the Rafsanjani period with rose-tinted spectacles.

Hemmati’s newly set up Twitter account adds to his growing list of social media outreach platforms. He is already known as active on Instagram and the audio social media app Clubhouse. On the latter, he has entered into conversations with journalists and like-minded liberal types, insisting that he should be viewed as a reformist and stating that he has a slate of major economic reforms planned for Iran.

In his latest poke at Ebrahim Raisi—the chief of Iran’s judiciary who is seen as the hardliner most likely to succeed the pragmatic moderate Hassan Rouhani as president—Hemmati challenged the frontrunner to unblock Twitter in Iran as he is the only person in Iran—apart from Supreme Leader Ayatollah Ali Khamenei—with the authority to make that move. As things stand, great numbers of Iranians access it via a virtual private network (VPN).

As part of his presidential campaign, Hemmati has said he would as president target policy to assist the low-income deciles.

A universal basic income for the low-income deciles is part of Hemmati’s plan for winning over voters, including a handout equivalent to around $40 a month.

The odds on Hemmati winning the presidency, however, remain rather long. Many people fear that the time of Raisi—who was trounced by Rouhani in the 2017 election—has come, especially given the manoeuvre by the election vetting body to remove the top moderates from the ticket. Hemmati has actually achieved something of a whirlwind of support in just the past week alone, but there is an overwhelming fear that millions will not turn up at the polling stations because of the terribly narrow field of candidates permitted by the theocratic apparatus that keeps elections and the government on a leash.

But if Iran’s tumultuous history of elections is anything to go by, even when the deep state has a preferred candidate, upsets like the 2005 victory of conservative and populist Mahmoud Ahmadinejad can happen. If Hemmati rallies the moderates, reformists and liberals behind him and gets the word out in time, he just might deny Raisi at the last.