TEHRAN BLOG: Iran ‘set to scale down nuclear deal undertakings’ as US cranks up pressure on multiple fronts 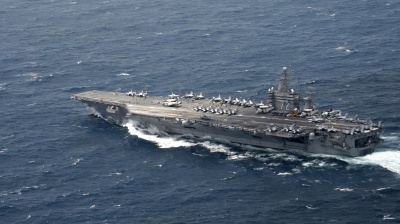 US national security advisor John Bolton made intimidating remarks saying the aircraft carrier USS Abraham Lincoln was on the way to the Gulf, but reports indicate it was scheduled to head there anyway.
By bne IntelliNews May 6, 2019

Local reports are suggesting that Iran is preparing to announce a partial withdrawal from the nuclear deal on May 8—a year to the day that the Trump administration unilaterally walked out of the accord.

The step, or possibly other reciprocal actions, would be in response to a hugely aggressive tightening of the screw by the US that now even includes sanctions drawn up to pressure Tehran into halting its production of low-enriched uranium used in its civilian nuclear energy programme—the nuclear deal (formally known as the Joint Comprehensive Plan of Action, or JCPOA) permits Iran to to keep up to 300 kilograms of uranium enriched to a maximum 3.67%, a good deal below the level needed to create a nuclear weapon.

The bellicose ramping up of pressure on Iran in recent weeks by the US has alarmed observers who feel uber-hawkish White House officials could be trying to goad Donald Trump into military action against Iran. Iranian Foreign Minister Mohammad Javad Zarif has warned of such a scenario, claiming that there were parties who might want to create an ‘incident’ that could be deviously used to justify such a move. The US last week commenced a campaign to attempt to drive Iran’s lifeline oil exports down to zero with the use of sanctions, while the previous week it took the unprecedented step of listing Iran’s elite Islamic Revolutionary Guard Corps (IRGC) as a Foreign Terrorist Organisation (FTO).

Late on May 5, Trump’s national security advisor John Bolton said the US was sending an aircraft carrier and a bomber task force to the Middle East in response to a “number of troubling and escalatory indications and warnings” from Iran. He added that the deployment was “to send a clear and unmistakable message to the Iranian regime that any attack on United States interests or on those of our allies will be met with unrelenting force.” However, there were reports that the Abraham Lincoln carrier strike group was already bound for the Gulf a month before Bolton made his announcement and the president’s advisor gave no details of what indications and warnings he was talking about.

There is, however, some concern that Iran might try to block the world’s most strategic waterway for energy shipments—the Strait of Hormuz—in response to the US move against its oil exports, although Tehran would be unlikely to resort to such a tactic unless the US physically blocked its shipments. Around a fifth of the oil consumed globally passes through the chokepoint.

Response has to be expected
With the US raising tensions to such a combative level without even detailing any clear provocations, a response from Iran has to be expected but local reports indicated that leaving the nuclear deal isn’t on the agenda. Instead, Iran seems set to introduce minor and general reductions on some of its JCPOA commitments. It is anticipated that its plans are within the framework of articles 26 and 36 of the accord. A limited withdrawal is thus the immediate prospect, at least according to an Iranian official involved with the nuclear deal’s implementation, who was cited by the state-run Iranian News Agency.

Iranian President Hassan Rouhani is expected to make the announcement of Iran’s changed approach to the JCPOA via state media on May 8. The matter has been communicated informally to European Union officials, the official reportedly said.

The UK, France and Germany were among the six major powers (the others were the US, Russia and China) who signed the nuclear deal with Iran in late 2015. The accord was to shield Iran from heavy sanctions in return for curbs on its nuclear programme designed to dissolve any potential Tehran might have for taking the path to the development of a nuclear weapon. Apart from the US, all the deal signatories as well as UN atomic inspectors are in agreement that the Iranians remain in compliance with the painstakingly negotiated JCPOA and that it should be maintained. But Trump unilaterally pulled the US out of the deal in May last year, arguing only sanctions, unprecedented in their scope and impact, would force Iran to effectively cut back its nuclear ambitions and alter its activities and policies in the Middle East.

Disappointing Europe
Despite offering vocal opposition to Trump’s resignation from the JCPOA and introduction of a sanctions regime, Europe has disappointed the Iranians by delivering little by way of measures protecting trade and investment.

It is unclear what Europe’s response to Iran’s partial pullout from the nuclear accord, if it goes ahead, will be. Relations between Tehran and Brussels and Europe’s major powers are already on edge given the lack of practical assistance the Europeans have managed to provide the Iranians in the face of Trump’s building aggression—supported at every turn by Israel and Saudi Arabia—and there could now be a further cooling.

In a press release earlier on May 4, the foreign ministers of the UK, Germany and France and foreign policy chief of the EU expressed concern at the US’s continued isolation of Iran and its decision "not to fully renew waivers for nuclear non-proliferation projects in the [JCPOA] framework”.

"The lifting of nuclear-related sanctions is an essential part of the [JCPOA]," they wrote.

With many of the contenders in the race to be the 2020 Democratic presidential candidate having expressed their intention to take the US back into the nuclear deal, Tehran may hope it can hang on until Trump is dumped out of the White House and a new president restores relations. But there is no guarantee that that will happen, there has to be a real prospect of some level of military confrontation and the sanctions assault has placed Iran in serious economic trouble. As an indication of the extent of that, the IMF recently said it anticipated that the Iranian economy would this year shrink by 6%—but given that that forecast came before the US announced its push to entirely end Iran’s oil exports, its next forecast could make for even more painful reading.