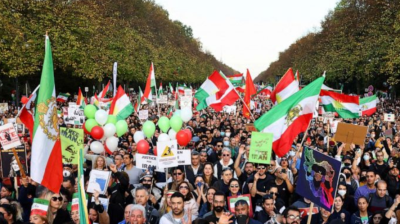 An estimated 80,000 people attended a Berlin rally called in support of the protesters in Iran. / social media, screengrab.
By bne IntelIiNews October 24, 2022

Some shopkeepers and factory workers have reportedly come out on strike in Iran in the past couple of days, as the country’s anti-regime protests—sparked by the death in custody of Mahsa Amini who was arrested for allegedly wearing a hijab, or headscarf, loosely—entered a sixth week. Assessing the level of the industrial action was made difficult by the authorities’ ongoing jamming of the internet and social media.

Iran’s deputy interior minister, Majid Mirahmadi, meanwhile, claimed to state media that the protests were in their “final days”. “There are various gatherings in some universities, which are decreasing every day, and the riots are going through their final days,” he said.

The 1500tasvir social media channel told AFP there were “strikes in a couple of cities including Sanandaj, Bukan and Saqez”, adding it was difficult to see evidence of them online as “the internet connection is too slow”, given the regime’s internet throttling and blackouts.

The weekend also saw more rallies in cities around the world, held in solidarity with the Iranian protesters.

Berlin was the location of a huge rally, reportedly attended by more than 80,000 people. Publicity for the rally urged “democratic governments … to stop negotiating with the criminal state called the Islamic Republic”.

Organisers of the rally in the German capital said Iranians had travelled to it from the US, Canada and all over the EU. Anti-government activists said the Berlin march amounted to the largest-ever demonstration against the Islamic Republic by Iranians abroad.

A teachers’ union in Iran called for a nationwide strike on October 23 and 24 over the crackdown on protesters. Amnesty International said it had to date cost the lives of at least 23 children. Some human rights groups said far in excess of 200 people were thought to have lost their lives amid the unrest in total, while by October 21 there were reports of almost 12,500 arrests.

The union, the Coordinating Council of Teachers Syndicates, said the “sit-in” would be in response to “systematic oppression” by the security forces at schools.

Iranian media on October 22 reported hardline senior cleric Ahmad Khatami as saying in a Friday prayers sermon in Tehran that Iran's judiciary should take tough measures against the protesters and anyone who thought the country's rulers would fall was dreaming.

"The judiciary should deal with the rioters—who betrayed the nation and poured water into the enemy's watermill—in such a way that others don't again fancy to riot," Khatami was quoted as saying, adding: "They have told deceived kids if they stay in the streets for a week the regime will fall. Dream on! The judiciary should deal with rioters in such a way they would never aspire to riot."

Iran has blamed "thugs" linked to "foreign enemies" for the unrest.