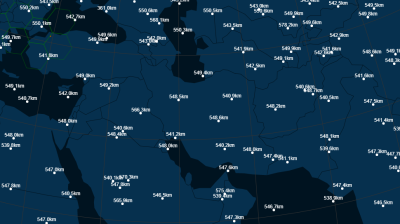 The dishes are reportedly on offer at Iranian rial (IRR) 600mn, or $1,900, with pre-orders being taken from across the country, which is struggling with internet blackouts brought in by the authorities attempting to put an end to the anti-regime protests that have rocked Iran since mid-September.

There’s something of a problem, however—though Musk grandiosely declared “Activating Starlink …” after gaining US sanctions exemptions for his attempt at bringing Starlink to Iran, and though—according to live satellite tracking—the SpaceX founder now has 10 low-earth orbit satellites sitting over Iran’s major cities, including Tehran, Tabriz and Isfahan, there are no Starlink ground stations, or “gateways”, in Iran to receive Starlink signals. Thus, anyone wanting to use a Starlink dish to hook up to the internet in Iran would probably have to rely on a gateway within range in a neighbouring country such as Turkey, Azerbaijan or Iraq.

Reporting on the claims that Starlink dishes are available on the Iranian black market, Shargh published images of an open Starlink box on a Persian-style rug. However, curiously, The Intercept on September 27 reported: “Implausibility [as to operating Starlink in Iran] hasn’t stopped Musk’s fans, either. One tweet from a senior fellow at the Atlantic Council purporting to document a Starlink dish already successfully secreted into Iran turned out to be a photo from 2020, belonging to an Idaho man who happened to have a Persian rug.”

bne IntelliNews cannot verify the sales are genuinely taking place, but enquiries have been sent enquiries to Baneh, a city in Iran’s Kurdistan Province renowned for its smuggled goods, on the prevalence or otherwise of the reported smuggling racket.

One smuggler told Shargh he was earning a margin of $350 per Starlink dish order.

Also examining the question of the lack of gateways in Iran, The Intercept spoke with Todd Humphreys, an engineering professor at the University of Texas at Austin, whose research focuses on satellite communication.

Humphreys suggested that ground stations built in a neighbouring country could provide some level of connection, albeit at reduced speed, “but that,” noted the publication, “still doesn’t get over the hump of every Iranian who wants to get online needing a $550 kit with “Starlink” emblazoned on the box.

While Humphreys was cited as adding that he was hopeful a slow trickle of Starlink terminals could aid Iranian dissidents over time, he added: “I don’t think in the short term this will have an impact on the unrest in Iran.”