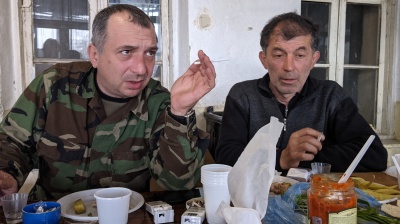 A local militia fighter and Armen Harutyunyan, who lost his house when the village was divided, discuss their plight. / Neil Hauer.
By Neil Hauer in Shurnukh September 21, 2021

The first you see of the village is a gargantuan Armenian flag, specially adorned with an emblematic cross, towering over the houses on the hill—reminding all which country it sits in.

Just around the bend, a different flag flies: the blue-red-green of Azerbaijan, its crescent shimmering above the lower houses. Between the two, a third: the Russian tricolour and its attendant soldiers.

This is Shurnukh, the now-divided village in southern Armenia that stands as perhaps the most bitter reminder of Armenia’s devastating loss in last year’s war with its neighbour, Azerbaijan.

Fifty metres from the road that serves as the new boundary, a group of Armenian men are renovating a house.

One of the workers spits in the direction of the Azeri soldier visible in the first house on the Azerbaijani side. “F**k their mothers,” he intones. 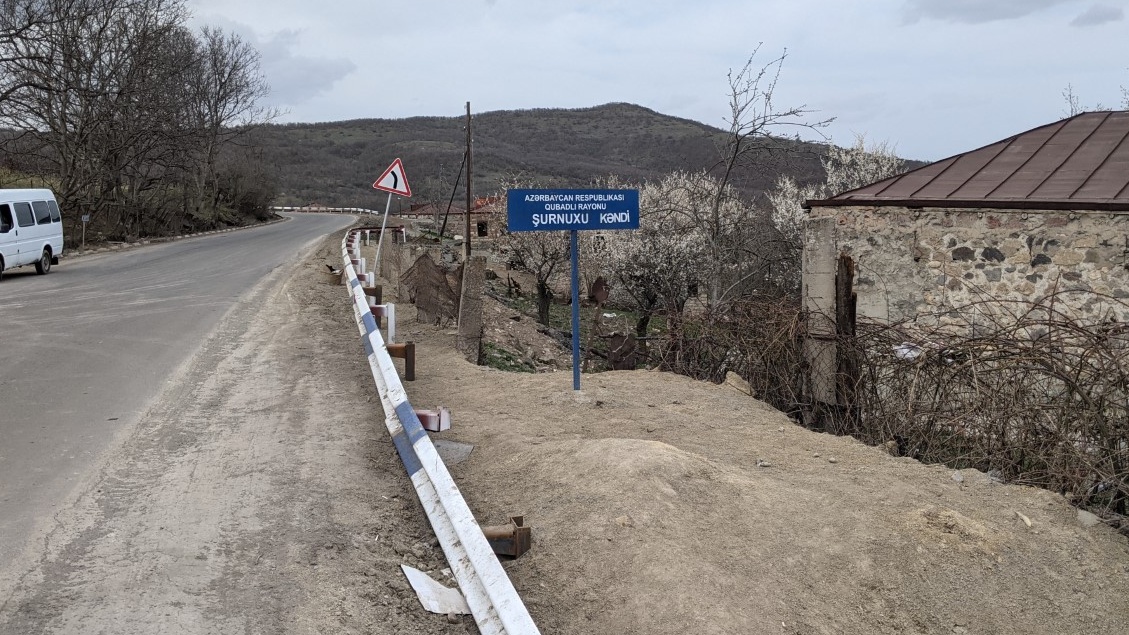 An Azerbaijani-language sign announcing the part of the village that is now in Azerbaijan (Image: Neil Hauer).

Syunik, Armenia’s southernmost province which hosts Shurnukh, is emerging as the new hotspot in Armenia’s longrunning conflict with Azerbaijan. On May 12, Azeri soldiers crossed over the borderline into the province in the Sev Lich (Black Lake) area, just 25km north of Shurnukh. They still hold positions there on Armenian territory.

Shurnukh was never a large village—the 2011 Armenian census listed its population as 207. But it became even smaller a few months ago.

As a result of the agreement that ended the 2020 war, Azerbaijani soldiers reoccupied swathes of territory, including border areas they had not held since losing them in the First Karabakh War following the Soviet Union’s 1991 collapse. This entailed demarcating the Armenia-Azerbaijan border in the area—never clear even in Soviet times—for the first time.

Shurnukh, which lies astride Armenia’s main north-south highway, lost out: the lower half of the village was determined to lie in Azerbaijan. On January 5, the handover was carried out. The 12 families who lived in the now-Azerbaijani half were evicted, their homes transformed into Azerbaijani military posts.

Armen Harutyunyan, 56, was one of those who lost his house. He now lives in a temporary dwelling, called a domik. The government has told the evicted families they will have new houses built for them, but no one knows when this will occur.

“At first, [the Azeris] told us we had just one day [to move out]. The Russians forced them to give us five,” Harutyunyan says.

“That was an Armenian [military] post there,” he says, gesturing to the nearby building now sporting an Azerbaijani flag. “Everything behind it now belongs [to Azerbaijan]. Including my house.”

During the handover, there were two Azerbaijani generals and two Russian generals present—but no Armenian officers.

Since then, conditions have gotten worse.

The only road that connects Shurnukh to the rest of Armenia has the misfortune of crossing into Azerbaijan at two separate points as it straddles the border. For the first 10 months after the war, this was little more than an inconvenience, a humiliation as locals were forced to pass newly erected signs proclaiming ‘Welcome to Azerbaijan’ as well as Azeri military posts on the roadside.

A month ago, Baku decided this was not enough. As part of efforts to pressure Armenia into formally reneging the Karabakh issue, Azerbaijan closed the highway between Shurnukh and the city of Goris on August 25, blocking all traffic for two days before reopening it. Since then, Azeri officers have set up checkpoints on their side of the road, charging tolls to the dozens of trucks coming from Iran that use it daily. This new reality, and the threat of future closures, have forced Armenian authorities to speed up construction of alternate routes: improving a parallel road that runs through difficult terrain near the monastery of Tatev to the west, as well as a $1bn investment in blasting tunnels that will connect the towns of Sisian and Kajaran through a new and partly EU-financed route.

This is not the first time Shurnukh has suffered from this perennial conflict.

Walking back to his primitive new home, Harutyunyan gestures at one derelict building, its sharded windows blown out long ago. “The [Azeris] shelled that building with GRAD rockets in the first war [from 1991-94],” he says. Harutyunyan himself was a participant in that war, settling in Shurnukh at its conclusion.

Now, the close presence of the adversary is making even everyday life difficult.

13 cows that wandered into Azerbaijan

Syuzanna Avanesyan, 38, describes the main problem. “Our neighbours left two weeks ago,” she says. “They had 13 cows, and all of them wandered to the [Azeri] side [of the village]. They asked the Russians, the Red Cross, even the government to help get them back. The Azeris refused,” Avanesyan says.

“There’s no way life can go back to normal here,” she continues. “If the livestock wanders off, that’s it. There’s nothing we can do,” Avanesyan says.

Armenak, 40, (he does not give his last name) echoes her thoughts.

“The main industries here were livestock and logging. Now that’s all been given [to Azerbaijan]. There’s no work here,” he says.

Asked if the government is helping him, Armenak just laughs. “Look around. Do you see any government? There is no government in this country,” he says.

The government’s competency in ensuring border security has come even more into question in recent weeks. The May 12 incident elsewhere in Syunik province saw Azeri soldiers penetrate more than three kilometres into Armenian territory, as PM Nikol Pashinyan himself confirmed. It’s not clear why there were evidently no Armenian soldiers stationed along that stretch of the border.

Precarious, but a refuge

Despite its precarious position, Shurnukh has even become a refuge for some who have fled even worse situations

Zabela Karapetyan, 86, is a native of Karabakh, something her thick, dialect-heavy accent makes clear. When the last war started, she came here to stay with her daughter-in-law. Now, she’ll never go home—her village, Sargashen, was captured by Azerbaijan in early November.

“I had three sons,” says Karapetyan. “One of them was killed in the first war. Another was killed in Baku, in the [1990 anti-Armenian] pogrom,” she says.

“What are these Turks doing here now?” she asks angrily, using a pejorative commonly used to refer to Azerbaijanis. “Why do I now have to see them every day?”, she says.

The new arrivals are not idle. While the men repair the house, an Azerbaijani KAMAZ truck pulls out onto the road, closely watched by the heavily-armed Russian peacekeepers nearby. “The Azeris are allowed to use the entire road, under Russian supervision—from Vorotan [10km to the north] all the way down to Kapan [30km south],” says Karen, the local military commander.

And while the Armenian government may not be doing much, it has prepared the villagers for the worst: the army has distributed rifles and shotguns to all able-bodied men in the village.

“Of course we need these weapons,” says Armenak. “What else are we supposed to do if the Turks come? Kick them?,” he asks.

Incidents have already occurred between locals and Azeri soldiers elsewhere in the province. On April 27, a shepherd near the border village of Aravus was beaten by Azeri troops.

Shurnukh’s future is even more precarious than its present, but some locals are intent on making it a showcase of Armenian resilience. Labourers are building a new store with the help of volunteers from Yerevan, and many buildings are being overhauled.

Over a spread of khorovats barbecue and between shots of throat-burning homemade oghi (mulberry vodka), the village mayor, Hagop Arshakyan, is frank on both topics.

“We are rebuilding this village, to show the Turks we are not afraid,” he says.

“The greatest pain is that our children have to look out their windows and see this, the enemy,” he says. “The situation is very difficult. A child can wander across the street and suffer the same fate as our animals,” Arshakyan says, shaking his head at the thought.

But the pride and courage—perhaps fuelled just a little by the alcohol—wins out.

“This has always been Armenian land,” says Arshakyan, slamming the butt of his rifle on the ground. “The war isn’t over. It will all be ours once again.”