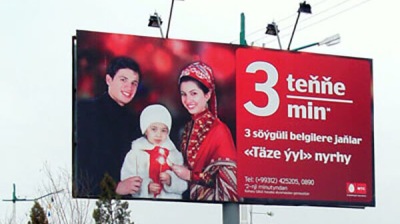 Leading Russian telecoms company Mobile TeleSystems (MTS) is dismantling its equipment and pulling out of Turkmenistan after the government cut off its services yet again in a dispute over profit sharing.

One of Russia’s big three mobile phone operators, MTS has been working in Turkmenistan since 2005. However, the government has on three occasions closed the operation down, each time to demand a larger share of the profits.

After the government cut off its access the internet and long distance lines in September 2017, the company says it has had enough and is pulling out completely. MTS began dismantling its base stations and sending its equipment back to Russia in December.

It has also filed a request for arbitration against the sovereign state of Turkmenistan with the World Bank’s Paris-based International Centre for Settlement of Investments Disputes (ICSID). According to ICSID website, the tribunal consisting of three arbitrators has now been constituted and our sources say that the process is likely to be several years to conclude.

MTS intends to sue the government for its lost investment and while it has not said how much the claim with the ICSID will be, the company previously estimated its losses at $750mn.

MTS has had a long and difficult experience in Turkmenistan that went wrong almost from the start. In 2005 it entered the market by acquiring a privately owned telecoms operator BCTI that had 47 base stations and some 59,000 subscribers. The government almost immediately supended its license , demanding that BCTI share 70% of its profits with the state, but after a long negotiation MTS eventually agreed to pay 20% of its profits after tax, fees and fixed costs.

Over the next five years MTS invested$250mn  into its local subsidiary and expanded its network to 1,130 base stations that were servicing 2.5mn clients.

However, at the end of 2010 the government shut the company down again by suspending its license and demanded a larger share of the profits. After two years of negotiation MTS eventually agreed to increase the profit share with the state to 30% and in return received a five-year license with the option to renew for another five years after that.

MTS’s licence for communication services was valid until July 26, 2018 and as of the end of the second quarter of 2017, MTS provided services for 1.7mn people in Turkmenistan. But a year before the licence was due to expire MTS services were shut down for a third time. According to bne IntelliNews’ sources close to the company, the government and its organs have not approached the company nor responded to requests for negotiation to resolve the dispute.

“It is disappointing that the good faith efforts are not reciprocated in any way by the state,” a bne IntelliNews source said. “MTS is being forced to withdraw and is making a claim in the ICSID. However, MTS remains open to engage in talks to reach a resolution and is willing to negotiate.”

The dispute looks more serious than the previous showdowns as MTS says it is packing up its equipment and taking it home. The state is facing the prospect of transferring the licence to someone else, but the new operator would have to start from scratch and invest hundreds of millions of dollars in rebuilding the base station network.

Investing in telecoms in Central Asia is fraught with problems due to the corrupt and unpredictable governments there.

MTS, along with another Russian operator VEON (previously VimpelCom) and Nordic telecom giant Telia, were accused of paying bribes to win 3G and 4G licences in Uzbekistan to the former president’s daughter, Gulnara Karimova, who is now in jail. VEON has already been fined $795mn by the US and Dutch authorities in the case and MTS booked a RUB37bn ($536mn) loss on its Uzbek operations in the third quarter of 2018 after settling its own claims. Telia exited the country completely in 2017.

The dispute in Turkmenistan is unlikely to affect MTS’s share prices as the operation there contributed only 1.15% of the group’s revenue in 2016, according to MTS. It has received no revenue from the subsidiary at all since the September 2017 shut down.