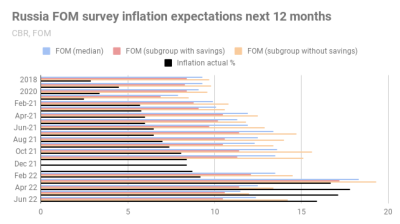 Russian households’ inflation expectations for a year ahead edged up in June 2022 (chart) and are now close to the levels of August-September 2021, as shown by FOM’s survey, the Central Bank of Russia (CBR) reported in its latest update. Consumer confidence has also bounced back from March lows.

The median estimate of inflation expected in the next 12 months reached 12.4% in June, down from the recent peak of 18.3 in March after the start of the war and back to a level last seen in September 2021.

The public’s perception of falling inflation tallies with the forecasts by economists, who have lowered their inflation outlook for this year to 17% in the last month, down from 22% in the previous month’s forecast. Analysts now also anticipate inflation slowing to 6.7% in 2023 and 5% in 2024. The CBR’s target rate is 4%, which it expects to hit in 2024.

Expectations are driven up by lower-income groups, where food makes up some 50% of their shopping basket, and food prices have been rising much faster than consumer prices in general. Indeed, the FOM sub-group with no savings expect inflation to rise to 14.2% in the coming year, whereas the middle class sub-group are anticipating 10.5% in the same period.

The Russian public have been pleasantly surprised at how fast the CBR has regained control of both inflation and the ruble exchange rate after the shock of the outbreak of war in February.

“Businesses’ short-term price expectations continued to decrease, returning to the readings of spring 2021. Analysts’ inflation forecasts for 2022 and 2023 lowered. The Bank of Russia forecasts that given the monetary policy pursued, annual inflation will equal 14-17% in 2022, go down to 5-7% in 2023, and return to its 4% target in 2024,” the CBR said in its report.

In June, respondents became less concerned about the observed growth of prices for the majority of frequently purchased goods and services. The decrease in concerns was especially notable in relation to the rise in prices for sugar and salt, eggs, fruit and vegetables, and vegetable oil. RosStat recorded a slowdown of price growth in these product groups in May.

Households’ long-term inflation expectations slightly rose in June 2022, while staying below the levels of the second half of 2021 and early 2022.

The story was similar with companies. Companies’ price expectations decreased mainly because of a slower rise in costs, which was owing to a further strengthening of the ruble, stable prices for motor fuels and a gradual adaptation of businesses to the new external conditions of operation, the CBR explained.

The proportion of respondents who consider that the reason for the expected price growth is changes in the costs of raw materials and components decreased, coming close to the readings of the middle of 2021.

The estimates of the economic situation became less negative, and fewer respondents reported worries over risks to their business. Furthermore, companies believe that the contraction of demand decelerated, and they are now more optimistic about demand and output trends in the next three months, the CBR reported.

These results tally with the latest PMI indices, which also reported that Russian managers’ optimism for the rest of the year is high and the three PMI indices all went back into the black in June.

Price expectations declined most notably in trade, where the estimates of current demand remained more negative than in other industries. The average price growth rate anticipated by retailers in the next three months equalled 9.5% in annualised terms (vs 6.1% in June 2021).

The mining and quarrying sector lowered price expectations less notably as prices in the global market remained high. However, in contrast to most other industries, mining companies became more pessimistic in their estimates of current demand amid the external restrictions on exports of Russian commodities. Respondents became less positive about demand expected in the next three months, complaining about higher risks to their business.

Taken all together and Russia’s consumer confidence is rising again as the population is largely unconcerned by the war in Ukraine.

However, the more current FOM consumer confidence survey in June shows that confidence has bounced back strongly in the last month and rose for the third month in a row to reach 92.8 points, up 3.9 points from May, which is close to its two-year highs. (The two surveys use different scales and the numerical results are not comparable.)

“The present situation index increased most significantly, namely to 70.5 points (+5.4 points vs May). This index comprises the estimates of actual changes in personal financial standing over the year and the estimates of the suitability of the current period for large purchases,” the CBR said in its update.

“Despite the actual growth, the estimates of the present situation remain considerably below the range of 2017-2021. The expectations index that includes the estimates of changes in personal financial standing for a year ahead and expectations about changes in economic conditions in the country for the next one and five years increased in June as well, reaching 107.7 points (+3.0 points vs May), which is the highest level since May 2018,” the CBR added.

“Despite the continuing growth of optimism and a slight recovery of the current estimates of the economic situation, in June, a fourth of respondents reported that their income from employment or business declined due to the imposed sanctions,” the CBR concluded.

Nevertheless, households' propensity to save remained the same in June. The share of households that chose to save rather than consume edged down slightly to 52%, the CBR reported, as habits returned to their pre-war default.

“The proportion of respondents preferring to keep their money in bank accounts increased to 35.8% (+3.1 pp vs May). The percentage of those opting to have cash holdings decreased to 33.1% (-2.4 pp vs May),” the CBR said.