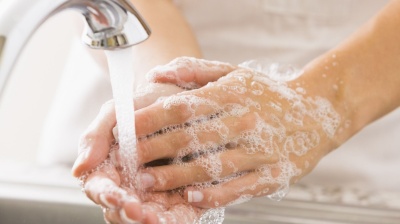 Everyone knows to keep their hands clean during the coronavirus pandemic, but for industries like food processing it has always been a necessity
By Ben Aris in Berlin September 22, 2020

In the time of the coronavirus (COVID-19) pandemic washing your hands has become a big thing. We are reminded about it in public service commercials. There are posters up in bars and restaurants. Celebrities go on telly and sing “Happy Birthday” while showing us how to scrub our fingers and palms properly. And in this fast developing technological world inevitably now there is an App for that, the Connectome AI.

The importance of washing hands to kill germs first became a medically important in 1847 when Ignaz Semmelweis, a Hungarian doctor who worked at the Vienna General Hospital, noticed that the rate of “childbed fever” (streptococcal infection) was three times higher in the ward for doctors and their students than in the ward that was run predominately by the nurses. After years of investigation he finally worked out that germs were being spread by the doctors' hands and advocated doctors wash their hands with chlorinated water between each task. The death rate on the doctors' side of the children’s ward plunged and the concept of good hygiene was born. (The theory of germs was actually developed later.)

Since then, washing hands has become a regulatory requirement long before the outbreak of the coronavirus for any profession where infection by germs is a health issue – predominantly in the medical and food processing industries. There is even a WHO-mandated “correct” way to wash hands to ensure doctors and workers don't pass infections.

Three years ago a small group of young Russian software engineers started thinking about the problem of making sure these workers not only washed their hands, but washed them properly. For a meat-packing company, for example, it's actually a crucial issue, as if employees are not thorough then whole batches of products have to be destroyed or the company could be liable for damages should something go wrong. But other than putting an inspector next to the washbasins there is no way to properly supervise and enforce best practice hand hygiene.

The engineers raised some capital from an angel investor, Naum Babayev, entrepreneur and joint owner of Damate Group, which is a large agricultural holding.

The problem is actually more complicated than it first appears. While voice and face recognition software has come on by leaps and bounds in recent years, getting a computer to recognise not just a motion, but a very specific set of motions, is not a well-developed technology. There is a big difference between getting a machine to recognise something has moved to identifying a very specific set of motions that at the same time can vary randomly. Compare that to a face, which is essentially static and the distribution of the features are permanent, or words, which are a specific combined and definable set of frequencies that can be finely measured by a decent microphone.

“This is a pretty new technology and I can’t think of an example of another commercial project that can recognise movements,” says Stanislav Varich, CEO of Connectome.ai. “The answer was to build a neural AI network that could learn, not to try and write algorithms. Then to show it a lot of videos.”

The Connectome AI is trained to recognise the WHO approved standards of hand washing. After its training is over the software is loaded up into a unit that is connected to two cameras that can recognise the employee and watch them wash their hands.

There is a screen mounted on the wall above the sink that shows the employee each of the various ways hands have to be washed and a progress bar to show how long is needed. The Connectome is also connected to a turnstile in some plants so that an employee that has not washed their hands thoroughly cannot gain access to the clean zone.

The company has grown in the last year and half. It has taken in more investment, but less than about $2mn, says Varich, and has a total of 30 people working for it, including the back office, sales and marketing staff. Varich formerly worked for a smaller Russian bank before spending a decade in the agricultural industry and is a finance professional who is now heading up the sales effort.

Connectome’s original investor is already a customer and has installed the machine in his factory and the company has another five deals in the works, including one in the UK with a “major UK food industry player,” says Varich, who is testing the equipment out – the company’s first foreign deal.

The coronavirus pandemic has been a godsend for the company as the need to wash hands has been dragged to the fore of everyone’s thinking.

“What has changed now is you don't need to explain what we do. People instantly get it. The conversation is much shorter now and there is a lot of interest,” says Varich.

Connectome is hoping to become an industry standard and is aiming at mass sales to make money. The cost is $2,000 for the hardware and then a $120 monthly licence fee per user.

While the Russian clients have linked the App to its access to the clean spaces, in Europe it has become a little more complicated, as the new GDPR regulations mean that you can’t use the face recognition technology without the express permission of the workers.

“We have disabled the face recognition camera for European users, although of course you still need the camera that watches the washing. However, the full system produces a complete record of employees' hand-washing practices and removes that possibility of liability on the hygiene score, so I understand the owners are in the process of getting permission from workers,” says Varich.

For the meantime, Connectome is concentrating on sales in Russia and Europe and is mainly working with food processors, but it is also targeting hospitals and has global ambitions to enter all the big markets around the world.

And as the word spreads, the first unsolicited customers are starting to approach Connectome.

“We had a call from some rich lady who had read about us in a magazine. She said that she wants to buy two units for the bathrooms in her son’s school, as a kind of gift, as she complained that her son never washes his hands properly at home,” says Varich.