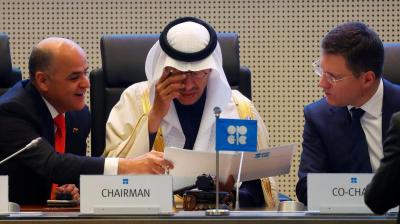 Russia and OPEC failed to agree on new production cuts during a meeting in Vienna. From April 1 all the oil producing countries are free to pump as much as they like. / wiki
By Ben Aris in Berlin March 8, 2020

Talks between OPEC and Russia in Vienna on a new production cut collapsed on March 6, sending oil prices tumbling to under $50. The Kremlin says it is “comfortable” with the current price of oil and has started a price war designed to undermine the US production of shale oil, according to experts.

“Russia's had enough of the shale guys living off OPEC-plus," an OPEC official told the Financial Times.

OPEC and Russia have held production down to keep prices up, but the US has been the big winner as it has not participated in the production cuts and is currently the biggest single producer of oil in the world on a barrels per day (bpd) basis.

Saudi Arabia is keen to keep the price of oil up as the current levels are below its budget breakeven price of about $80 per barrel. Russia’s budget, however, breaks even with oil prices above $42. Oil prices have averaged about $55 so far this year, but Brent plunged to $45.27 as of the end of trading on March 6.

But Saudi Arabia, the world’s largest oil exporter, responded aggressively following the collapse of the talks and has flooded its export market with cheap oil, starting a price war on March 7. Saudi has slashed pricing for its crude for foreign markets by the most in at least 20 years, offering unprecedented discounts for buyers in Asia, Europe and the US to entice refiners to purchase Saudi crude at the expense of other suppliers, reported Bloomberg.

Aramco tells refiners each month the price at which it will sell its crude and in a notice to buyers sent on March 7, the company announced it was slashing most official prices by $6-8 a barrel across all regions. The kingdom’s pricing decision affects about 14mn bpd of oil exports, as other producers in the Persian Gulf region follow its lead in setting prices for their own shipments.

Aramco also widened the discount for its flagship Arab Light crude to refiners in northwest Europe by a hefty $8 a barrel, offering it at $10.25 a barrel less than the Brent benchmark. Traders said the Saudi move was a direct attack at the ability of Russian companies to sell crude in Europe.

"All the hallmarks of price war, only thing missing is the smell of gunpowder,” said Jamie Webster, an energy analyst with the Global Energy Policy think tank.

Saudi Arabia has also privately told some market participants it could raise production much higher if needed, even going to a record of 12mn bpd, according to people familiar with the conversations reports Bloomberg. Analysts have described the Saudi response as a “shock and awe” strategy to cause the maximum amount of pain on the other producers, especially Russia, in the shortest amount of time, to bring them back to the negotiating table.

Commentators speculated that the failure of the Vienna talks could spell the end to the uncomfortable alliance between Russia and OPEC. Russia resisted joining the cartel for years, but recently changed its mind as part of the Kremlin’s successful efforts to improve its standing in the Middle East and undermine the US position there. The Saudi government has willingly moved closer to Russia as the advent of shale production has made the US a competitor in the oil market and considerably weakened its long standing ties with Washington.

But now the marriage of convenience between Moscow and Riyadh seems to be breaking down. The Kremlin has been under intense pressure from its own oil companies, especially the state-owned oil giant Rosneft, to end the production cuts deal. Russia produced a record amount of oil in 2019 and is on track to set another record in 2020. Russian oil and condensate production could rise to 11.48mn bpd in 2020, according to OPEC forecasts published on January 15, beating the post-Soviet record of 11.25mn bpd it set last year.

The Kremlin refused to agree to OPEC proposed deep supply cuts of 1.5mn bpd – the biggest cuts since the 2008 global crisis.

“Without the participation of Moscow, it is now all but certain that Riyadh will also not participate in the cuts, intended to stall the oil price nosedive brought on by coronavirus,” political scientist Dr Ariel Cohen said in a comment.

The proposed cut would have shaved 4% off global oil production. Demand for oil has already fallen sharply since the coronavirus outbreak began at the start of this year and China’s Manufacturing Purchasing Index (PMI) crashed to a historically low 38; anything below the 50 no-change mark is an economic contraction.

Russia has already done well out of the previous agreement where it promised to reduce its production by 300,000 bpd, shouldering a proportionately smaller share of the cuts than the other cartel members.

Russia’s reluctance to cut production is also partly motivated by de facto production cuts forced on Iran, Libya and Venezuela – all OPEC members – by US sanctions and political turmoil. Production in Libya averaged 155,000 bpd during February, down from 760,000 bpd in January thanks to fighting in the country.

The result is that the existing production cut deal will come to an end on April 1, after which there are no restrictions on the OPEC+ members.

“We have made this decision because no consensus has been found of how all the 24 countries should simultaneously react to the current situation. So as from April 1, we are starting to work without minding the quotas or reductions which were in place earlier but this does not mean that each country would not monitor and analyse market developments,” Russian Energy Minister Alexander Novak told reporters after the meetings in Vienna.

Iranian Oil Minister Bijan Zanganeh told reporters a day earlier that OPEC “has no plan B” if the talks fail.

However, Cohen speculates that OPEC members are likely to implement some sort of production cut deal on their own to try and stabilise prices at around $50, as no deal at all will send oil prices tumbling, which helps none of the oil producers.

If Russia’s motivation for leaving the deal is to undermine the US shale production business then oil prices are likely to stay low for the foreseeable future. An oil price war between Russia and the US would represent a new and more aggressive phase in the bad relations that already exist between the two countries.

Russian President Vladimir Putin has spent much of the last four years building a “fiscal fortress” to sanction-proof Russia. He has sold down Russia’s US debt holdings, paid off debt and built up gross international reserves (GIR) to around $570bn now – enough to cover Russia’s entire external debt and still leave $100bn of cash. Moreover, a revolution of Russia’s tax service and new taxes, as well as a hike to the retirement age, have cut the breakeven oil price for the budget to around $42 from its peak of $115 in the boom years. All this means Russia can sustain a long war of attrition on US shale production.