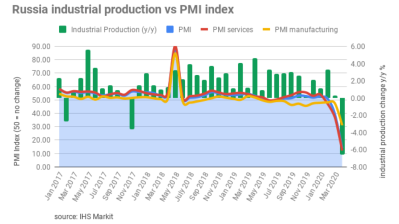 The services result is also still running slightly behind the manufacturing PMI, which also posted a mild recovery in May. The IHS Markit Russia Manufacturing Purchasing Index (PMI) was up slightly month on month at 36.2 in May from 31.3 in April, but still well below the 50 no-change mark, as the services sector has been crushed by the coronacrisis.

Taken together, the IHS Markit Composite PMI Output Index posted 35.0 midway through the second quarter, up from April's record low of 13.9, but also still deeply in the red.

“The May services PMI data signalled a softer, albeit considerable, contraction in business activity across the Russian service sector,” Markit said. “The decline in output largely stemmed from weak demand conditions and difficulties for customer-facing business to reopen due to emergency public health measures. Total sales were impacted by muted domestic and foreign client demand, as global lockdowns restricted travel. Subsequently firms cut their workforce numbers substantially, as lower new business inflows led to spare capacity and pessimistic expectations for the coming year.”

Markit reports that prices fell at their sharpest pace since the financial crisis in 2009 as companies sought to keep clients and find new ones in the face of extremely weak client demand. A substantial drop in new export orders also dragged down overall new business. Export demand contracted at the second-steepest rate since data collection for the series began in September 2014.

Reflecting lower new order inflows, firms reduced their staffing levels at a marked pace in May, reflected in Russia’s overall unemployment rate, which jumped to 5.8% that month, according to Rosstat.

Unsurprisingly, backlogs of work fell substantially in May as new business inflows continued to fall.

While companies were optimistic about their prospects for 2020, that optimism has given way to pessimism on the back of the coronacrisis. Companies continue to foresee a decrease in business activity over the coming year, amid concerns of weak client demand and fears over the timescale of any recovery.

The silver lining is that depressed demand has kept inflation in check, which has posted no change in the first two months of May and 0.1% in the third month. That allowed firms to cut their prices to maintain sales. The rate of cost inflation was well below the long-run series average, says Markit.