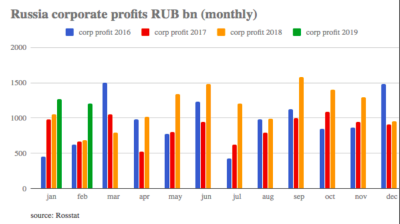 Russia’s corporate profits have also most doubled from last year to RUB2.472bn in the first two months of this year
By bne IntelliNews April 27, 2019

Russian aggregate corporate profits rose to RUB2,472bn ($38bn) in February, adding RUB1,208bn to the profits made in January, the latest data available. That brings the cumulative profits Russian companies earned in February well ahead of the RUB1,740bn they earned in the same period of 2018, which was already a strong year compared to 2017 and 2016.

Profits in February were also nearly double the corporate profits of RUB687bn earned in February a year earlier, according to Rosstat.

The various crises of recent years have caused a consolidation with the result that profits have become increasingly concentrated in the biggest companies and are growing.

There were a number of extremely strong individual reports of profits soaring in 2018 as Russia is in the midst of the earnings reporting season.

Amongst the more remarkable results announced in recent weeks were Russia’s leading internet company Yandex’s report of a 49% US GAAP net profit jump in the first quarter of 2019 to RUB6.2bn.

But the increases are not universal. Russian internet major Mail.ru reported a net profit drop of 47% year-on-year to RUB1.6bn under IFRS due to a heavy investment programme. And net IFRS profit of Russian Railways (RZD) dropped four-fold year-on-year in 2018 to RUB35.4bn. Banks have also been doing very well, with sector profits trebling in the first quarter. The sector as a whole has been reporting the highest level of profits in five years, with most banks increasing their dividend pay-outs as a result.

In general companies that reported “surprise” earnings larger than management guidance were in the majority in the forth quarter of 2018, according to BCS Global Markets. A total of 38% of listed companies reported results that were 2% or more higher than expected in the last quarter of last year, against the 27% that reported results that were 2% or more less than expected.

That result is down from the 63% of companies that reported better than expected results in the third quarter of last year – the best result since the start of 2017 – but the outlook for upside surprise on earnings this year is already looking up. 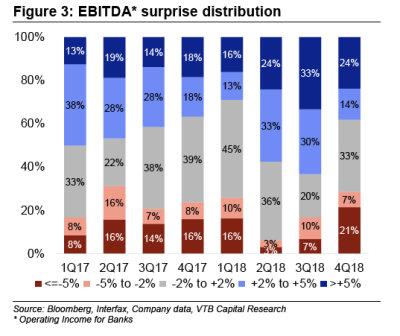 Taken together the increase in profits is not feeding through to a general recovery for the Russian economy, which is expected to put in a very lacklustre growth of 1.3% this year, but at the microeconomic level things are picking up.

The lack of a trickle down to the general population from the strong corporate results was highlighted after real disposable incomes fell 2.3% in the first quarter of this year as Russia’s incomes go into their sixth year of stagnation.

The rising profitability is also seen in the improving business confidence and manifest in a raft of IPO and SPO plans announced in recent months. However, actually getting these IPOs away remains hard. Russia has not seen an IPO since two mid-cap players – shoe retailer Obuv Rossii and transport company Globaltruck – listed in 2018.

s article is from bne IntelliNews Russia monthly country report. Sign up to receive the report to your inbox each month, covering the slow moving macro- and micro-economic trends, the major political news and a roundup of the main sectors and corporate news. The first month is free and you can unsubscribe at any time.