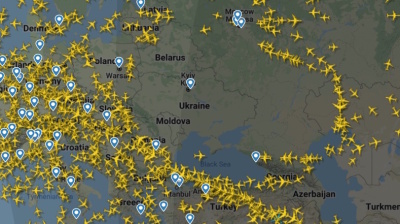 A view of how airplanes are avoiding Ukraine. / Screengrab, Flightradar 24, Live Air Traffic
By Robert Anderson in Prague February 24, 2022

Tough Western sanctions on Russia could slash Russian GDP by 5%, push the ruble to over 100 to the dollar and force the Russian central bank to raise rates by 500 bps, Capital Economics said in a research note after the Russian invasion of Ukraine on February 24.

The British economic consultancy said Russia is in a much stronger position to weather Western sanctions than it was during the invasion of Crimea in 2014, but sanctions could still cause real damage. It estimates that sanctions already announced could reduce Russian GDP by at least 1% and prompt the central bank to raise its policy rate from 9.50% now to at least 12.00%.

Capital Economics says it looks that the West is shifting towards tougher sanctions following the full-scale Russian invasion of Ukraine. These could include bans on exports of certain technologies to Russia from the West, as well as sanctions on the major Russian banks, which would limit Russia’s interactions in the US financial system, affecting its ability to access dollars.

The consultancy says the most severe sanctions – which it sees as less likely – would be to cut Russia out of the SWIFT financial messaging system or sanction Russian energy firms. Such measures would harm its ability to export its key energy products – energy exports amount to $240bn, or 15% of Russia’s GDP per year – but would also cause collateral damage to Europe due to its dependence on Russian gas.

Capital Economics says such sanctions could have knock-on effects on Russian banks, whose short-term FX liabilities are much larger than their short-term FX assets, and the central bank might face pressure to use its large FX reserves to support commercial banks.

Were such “aggressive” sanctions to be implemented, Capital says it could reduce Russian GDP by 5%, push the ruble towards 100/$ and force the central bank to raise interest rates by another 500 bps.

Russian markets have been rocked by the Kremlin’s decision to invade its neighbour. There has already been a huge sell-off of Russian bonds, with two-year OFX yields climbing 500 bps. Russian equities have fallen 30% on the day, with the main markets closed, and the rouble has sunk to 89 to the dollar.

“Their markets are imploding. The threat of sanctions is doing the job already that the West would want,” Jonas Goltermann, senior economist in the Capital Economics markets team, told a webcast on February 24.

The invasion and the Western response are also having an impact on global financial markets.

Russia accounts for 40% of EU imports of natural gas, and about 30% of its crude imports but even if the West or Russia do not interrupt supplies, there will be a risk premium on prices, Capital Economics says. Oil prices have already soared to more than $100 a barrel and Capital Economics now predicts that if the situation escalates, oil could trade in a range of around $120-140 per barrel and European gas to rise close to its mid-December high of €180 per MWh. However, the consultancy predicts gas prices could fall sharply in Q2, when European seasonal demand plummets.

The war will also hit other commodities, such as foodstuffs and industrial metals, particularly aluminium, nickel and palladium, where Russian producers could come under sanctions. Together, Russia and Ukraine account for between 25-30% of global wheat exports, and around 80% of global sunflower seed. These supplies could be interrupted by conflict around the Black Sea ports, and some crops could also be damaged by fighting inside Ukraine. Capital Economics has raised its near-term forecasts for most agricultural commodities by around 25%.

Higher energy prices could push up global inflation by 1 percentage point to an average of 6% in Q2, Capital Economics says, while higher agricultural commodity prices could add another 0.2pp to 0.4pp.

“The big risk comes through the inflation channel,” Jennifer McKeown, head of global economics, told the webcast. “If oil prices rise to $130 a barrel that would add 1.5 percentage points to headline inflation. That could leave inflation in advanced economies at 4% at the end of the year, rather than 2.5% in our last forecast.”

Despite this rising inflation, the damage to global demand and confidence caused by the war could make central banks think again about the current shift towards tapering the buying of bonds and hiking rates, it speculates.

“Central banks will start to to worry about the adverse effect on their economies,” says McKeown. “This tips the balance on putting or slowing tightening.”

Capital Economics says it now thinks the ECB is less likely to set a firm end-date for quantitative easing at its March 10 policy meeting and will keep more flexibility over future rate hikes.

In terms of the impact on stocks, looking back at historical examples, Capital Economics predicts that global stock markets will fall by around 20% to 25%, amid a shift to safe havens such as inflation-linked bonds, gold, assets linked to commodity prices, as well as US assets and the dollar.

“If the conflict prompts policymakers to hold off, or at least slow down, the tightening process, that may cushion the blow to risky assets,” Capital Economics says.

“If central banks feel they have to keep hiking that would be the worst of all possible worlds for risk assets,” said Goltermann.