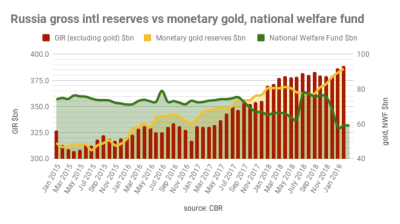 The Central Bank of Russia (CBR) is flip-flopping over the need to build up gross international reserves (GIR) to $500bn. In the latest statements the bank said it is necessary to “increase FX and gold reserves even more” from the current  highs, given the “persisting sanction risks and current economic structure,” deputy head of the CBR Sergey Shvetsov told the press on April 3.

The volume of FX/gold reserves reached $487bn as of March 22 – bring reserves back to the same level they were before the sanctions regime started following Russia’s annexation of the Crimea in 2014 – increasing by $4.6bn week-on-week on positive currency revaluation, and FX purchases off the market.

However, Shvetsov did not provide any guidance on the target amount of reserves, saying that it was better to wait for quarterly or annual reports of the CBR. However, separately CBR governor Elvira Nabiullina has said in the past the CBR has an informal goal to get reserves back above $500bn.

Russia’s reserves reached an all time high of $597.5 billion on August 8, 2008 just before the global financial meltdown and when oil prices soared to over $150 per barrel, before falling to a post-crisis low of $356bn in April 2015.

If the CBR is intending to increase reserves again then that is another about face in policy, as more recently in October 2018 another deputy head of the regulator Xenia Yudaeva said that the goal of increasing Russia’s gross international reserves (GIR) to $500bn is not longer a priority for the central bank.

The $500bn target was set by the CBR in 2015, as the currency market stabilised after extreme volatility of 2014, and was repeated by Nabiullina until the spring of 2018. Bloomberg claimed back in 2015 that setting a FX/gold target of $500bn was a direct “recommendation” by President Vladimir Putin, who has long been following a “fiscal fortress” policy of high reserves and low external debt, but has been resisted by the central bankers.

But in September 2018 along with front-loading the key interest rate by 25bp to 7.5% the CBR halted purchases of foreign currency on the currency market as ruble came under increased pressure from possible toughening of sanctions. There were four rounds of US sanctions imposed in 2018 and another round is expected this April.

Recent ruble and oil price stability now allows the CBR to top up the reserves without risking a disturbance in the currency market. Even without further active accumulation the FX/gold reserves already fully covers Russia's public and private external debt with cash that stands at about $470bn. Russia’s external debt is currently at its lowest since mid-2000s.

Russia has been trying to insulate itself from currency instability by delinking its business and reserves holdings from the dollar. Last year it sold off three quarters of its US treasury bond holdings and since 2007 it has been ramping up the share of gold in its reserves mix, which currently stand at record levels.

The Central Bank of Russia held an unplanned ahead-of-schedule policy meeting on May 26, at which the board of the regulator slashed the key interest rate by 300 basis points from 14% to 11%.

Albania’s electricity generation fell in Q1, forcing the country to increase imports more than sevenfold at a time when prices are soaring.

Growth will be driven by tourism and construction, but slowed by sharply rising prices – inflation has already exceeded the central bank’s 3% target.

Polish retail sales grew 19% y/y at constant prices in April, the growth rate nearly doubling versus a gain of 9.6% y/y the preceding month.